Building on the capacity to fuel word of mouth momentum via personal networks, Facebook has announced two new options to help people use the platform for fundraising purposes. And one of them, in particular, could hold particular significance for the future development of Facebook Live.

"Personal fundraisers allow people to raise money for themselves, a friend or someone or something not on Facebook - for example a pet."

The process here is fairly straight-forward - if you have a personal cause you want to promote, you can now create a Page to raise funds for that cause, where people will be able to donate via secure payments without leaving Facebook. Once they've donated, they'll also be able to forward your message to more people, raising awareness of your campaign.

Fundraising on Facebook can be a great way to build momentum around a cause, as each action notifies other people in your network. So if you see all of your friends have donated to Jack's dental surgery fund, there'll be a level of implied peer pressure on you to do the same (Facebook found similar peer effect inspired more people vote in the 2010 US Congressional Election).

The new option is being rolled out in the U.S. over the next few weeks - Facebook will start out with six specific categories for critical financial needs:

Each application will be reviewed by Facebook (24 hour turnaround time), with The Social Network also taking a 6.9% + $.30 fee to cover "payment processing fees, fundraiser vetting, security and fraud protection".

"Facebook's goal is to create a platform for good that's sustainable over the long-term, and not to make a profit from our charitable giving tools."

But it's the secondary element of this new announcement that may hold wider significance, beyond donations alone.

"Today, we're announcing that verified Pages can now add donate buttons to their live broadcasts, which will give public figures, brands, businesses and organizations new ways to fundraise on Facebook for the nonprofits they support." 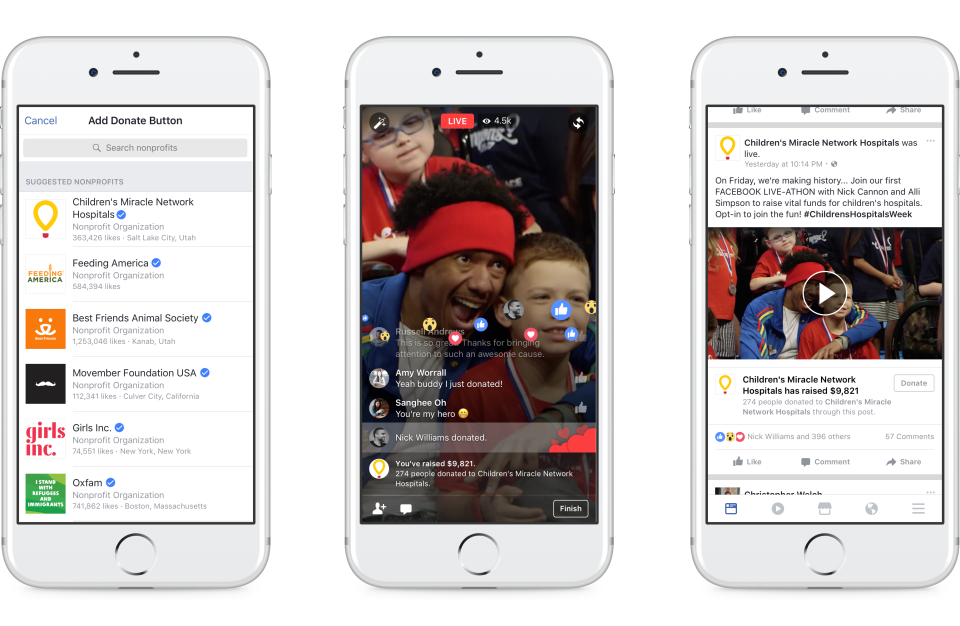 To be clear, the functionality itself is not new - Facebook announced the capacity for non-profits to raise funds through Facebook Live last November, but this new update expands on it's availability, giving more users means to provide support for charitable groups.

The capacity to be able to donate during a broadcast is similar to YouTube's Super Chat feature, which enables live-stream viewers to give money to broadcasters in-stream.

The option to pay live-streamers has become a major business opportunity in China, where some streamers are able to earn a full-time living of similar systems.

Live-streaming platforms YouNow and Twitch also have donation options which, in YouNow's case, enables a sort of digital busking option for artists.

And while Facebook's donation system is, for now, limited to charitable causes, it's not hard to imagine they could soon introduce a similar process to provide additional incentive for live-stream talent.

At this stage, the process is limited to charitable donations, and it's great to see Facebook putting more emphasis on causes over squeezing out every revenue opportunity first.

Personal fundraisers will launch in the U.S. in beta over "the next few weeks