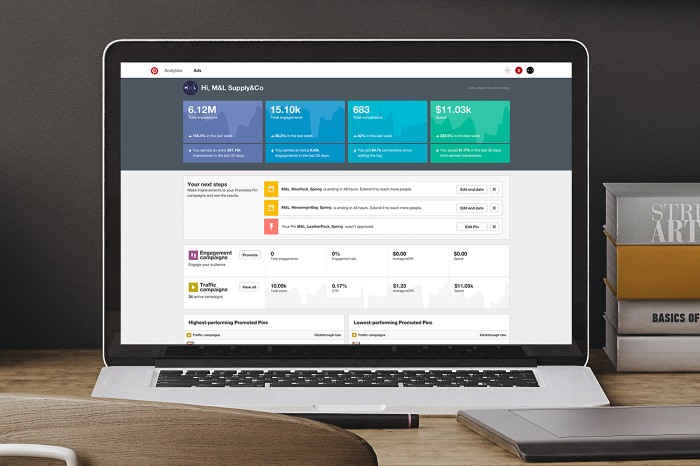 If your products or services are visually compelling and appeal, in particular, to women aged 18 and over earning more than $50k per year, you absolutely need to consider Pinterest as part of your social media strategy. While Facebook remains the overall leader, and other platforms reach their own, specific, audience niche subsets, Pinterest has slowly but surely continued to grow, and has developed a strong and dedicated community of users who use the platform for various common purposes.

One of the primary ways in which active Pinners use the network is for product discovery and research - a study conducted by research firm Millward Brown last year found that 96% of active Pinners use the platform to research and gather general information, while 93% use Pinterest specifically to plan for purchases. On top of that, a further 87% reported that Pinterest engagement helps them decide what to purchase. Those are big numbers, bigger than most other platforms can claim on purchase intent. As noted, if you're trying to reach that Pinterest demographic, Pinterest users are very aligned to the platform, and it plays a part in how they buy.

And now, reaching those users might be a little easier - in a new blog post published on the official Pinterest blog, the visual network has announced that they're opening up their Ad Manager tools to all small and medium sized businesses across the US, along with a range of updates and improvements to help advertisers maximize the performance of their Promoted Pins.

"Over the last year and a half, tens of thousands of businesses have used the Pinterest Ads Manager to create, manage and track the success of their Promoted Pins-and they're seeing great results. Since people save their favorite Pinterest finds (including ads) to their own boards, Promoted Pins generate lots of incremental impressions and engagements that get resurfaced time and time again. These engagements drive additional free value to advertisers over time-something you can't get on other platforms."

This is a particularly interesting note - given the discovery-driven nature of Pinterest, there's no need for Pin content to be time-bound as it's not about surfacing the latest updates so much as it's about finding the most relevant matches. In fact, research has shown that the average life span of a Pin is 1,680 times longer than a Facebook post, an important factor to consider - and, according to Pinterest, this longer lifespan also applies to Promoted Pins.

"In fact, advertisers who use the Pinterest Ads Manager received an average of 20% more (free) clicks in the month after the start of a Promoted Pins campaign."

Pinterest's DIY ad platform operates from within your Pinterest Ads Manager page - on the opening screen you're given an dashboard overview of your Pinterest ads and how they're performing. 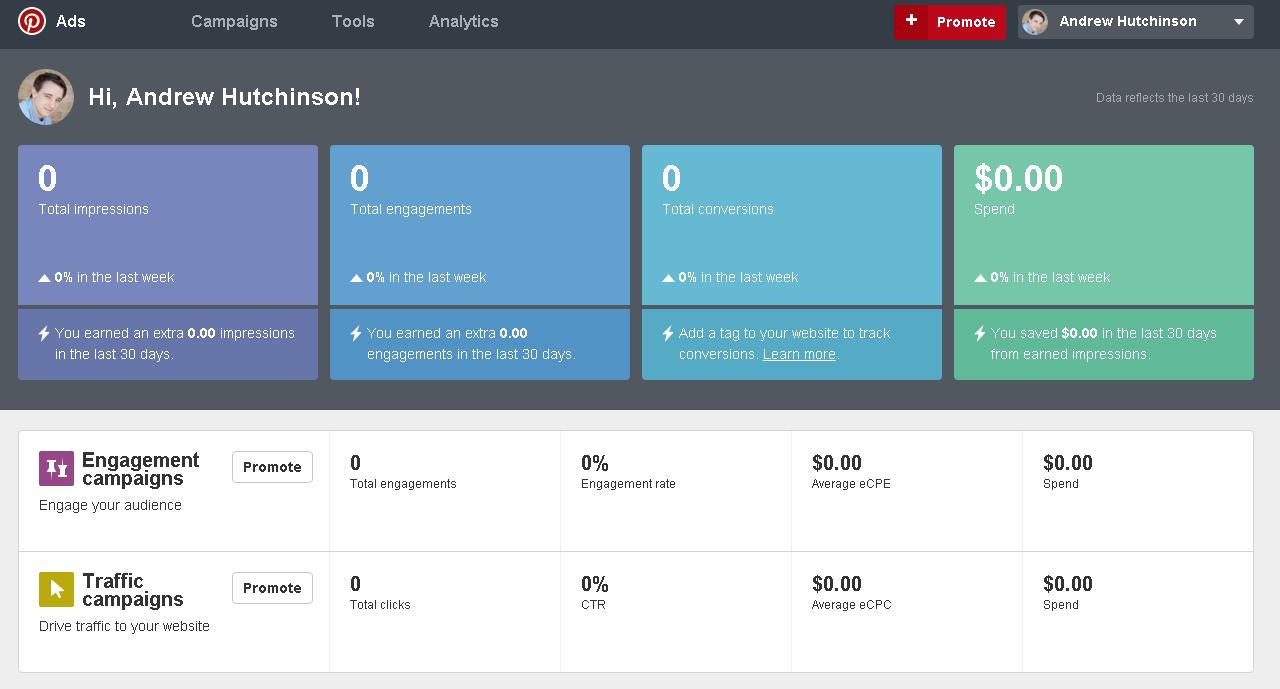 Creating a Promoted Pin campaign is easy - you just click on the red "Promote" button at the top of the screen and you're taken through a step-by-step process. You choose which of your Pins you want to promote and you go through to the next element which delves into the details of your promotion and reach focus, where there's a range of new options at your disposal. 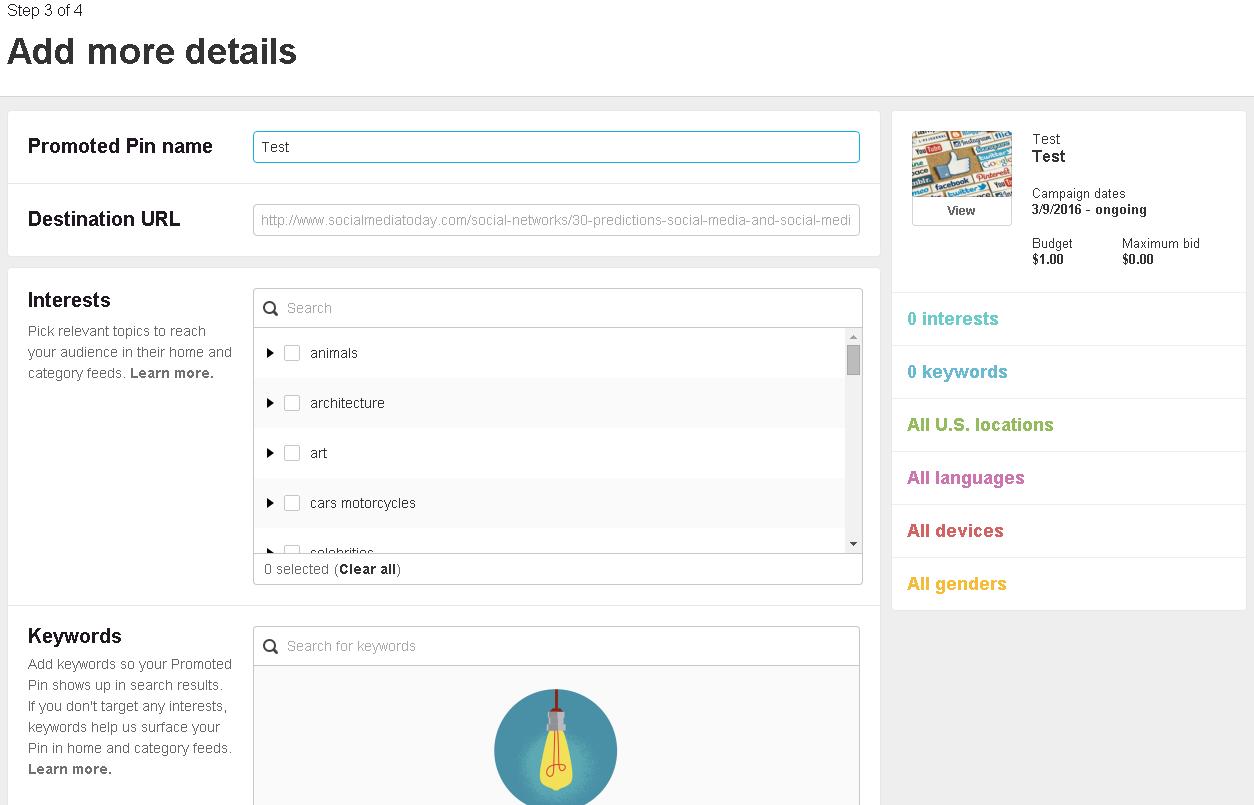 First off, you have interest targeting - Pinterest has expanded the number of available interest options from 30 to 420 - a 1300% increase. Available targeting options now include healthy recipes, humor, baby gear - you can even target people who are looking up specific styles of tattoos on the site.

In working to highlight the platform's use as a discovery channel, Pinterest's talking up the utility of these new targeting features, saying that:

"These interests reflect what people want to explore now and engage with in the future - not something they happened to browse last month or a pastime they were interested in years ago."

In addition to the new interests, the platform has updated their keyword targeting functionality - as explained by Pinterest's ad product lead Nipoon Malhotra (to MarketingLand):

"Previously the ads appearing in content feeds like the Pinterest home page could be targeted by interest but not by keyword, and the ads appearing in search results could be targeted by keyword but not by interest. No longer. Advertisers can now use interest targeting and keyword targeting simultaneously. This combination allows brands to advertise to people who may be using Pinterest to search for something specific but who also stick around to browse" 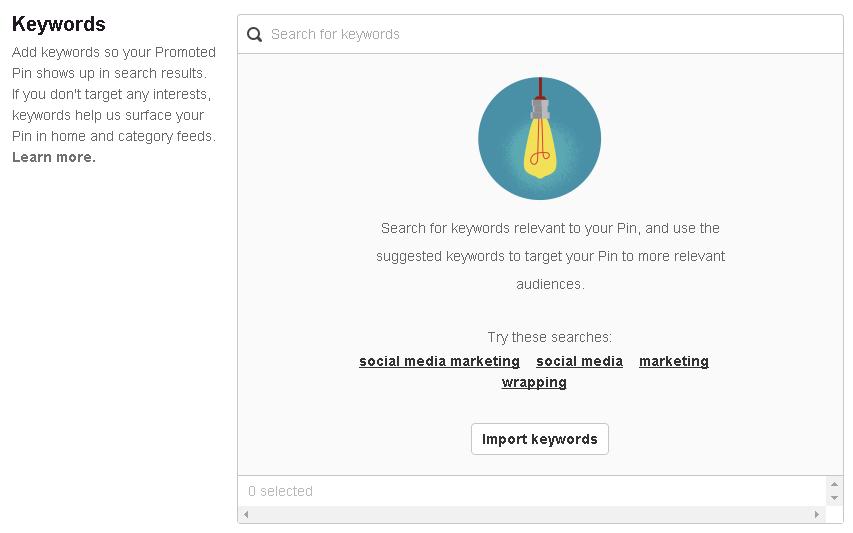 And the last addition Pinterest has announced is 'Customer Database Targeting'. Similar to the tools offered by Facebook and Twitter, Pinterest will now allow brands to upload lists of customer e-mail addresses which it will then cross-check against the Pinterest user database in order to locate those users on the platform. Advertisers need to have at least 100 e-mail addresses (to ensure the targeting is not too specific) and the option is only available through members of Pinterest's Marketing Developer Partners program at this time (Pinterest notes the option will be available in Ads Manager later this year).

It's an important update for Pinterest, and one which will no doubt be welcomed by marketers looking to either better utilize the platform, or start using it for advertising purposes. The addition of the new functionality, along with improvements to search and the implementation of Buyable Pins, is another step in the evolution of Pinterest into a core driver of eCommerce - with the company, reportedly, seeking to generate $2.8 billion in annual revenue by 2018.

If you've not considered Pinterest before, it might be worth checking your analytics and seeing what sort of traffic the platform's driving to your website. Or if not your own data, maybe check out what types of people are now among Pinterest's expanding user base. The platform has more than 100 million monthly active users, and the number of male Pinners increased 133% last year.

Definitely something worth taking into consideration.