Back in August, Twitter put the call out for entries to their first annual Twitter Awards, which aims to recognize the best performing advertisers on the platform. 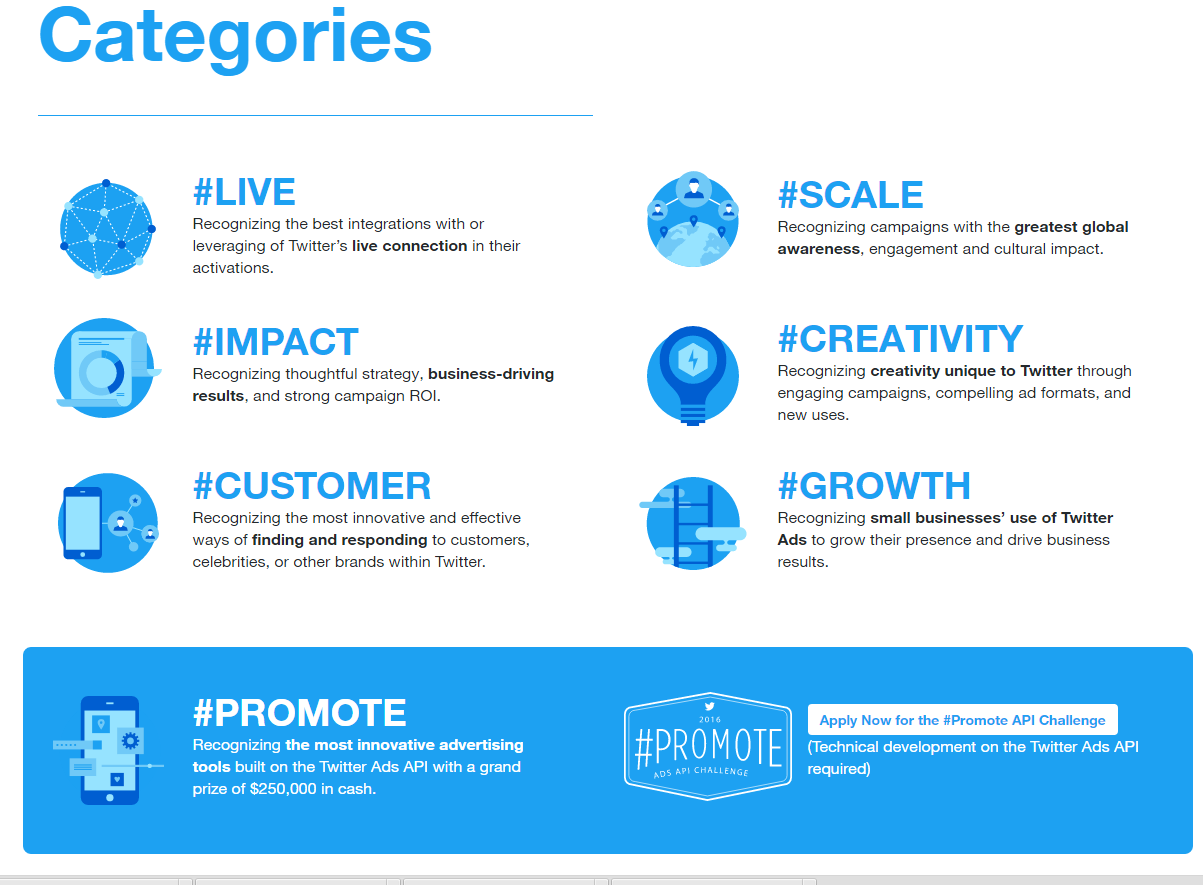 Well, the results are now in, so without further ado, here are the winners of each category of the 2016 Twitter Awards, along with a summary (from Twitter) about each campaign and some key performance stats.

The Live Award aims to recognize the campaign that best used Twitter to connect with people live during events, television, and global moments. The winner of this category was NASCAR.

"The "Ready. Set. Race" campaign sought to ignite the racing spirit in fans and increase engagement around the annual Daytona 500 stock car race. With a branded @NASCAR emoji and the Twitter logo painted on the Daytona infield, @NASCAR introduced the Hashtag 500 race on Twitter. The campaign invited fans to "race" for real driver gear - flags, helmets, bent metal from crashes - in real time by Tweeting specific hashtags at different moments during the live race. It was all about fast cars and faster thumbs."

The Impact Award recognized the campaign that utilized the most thoughtful, creative strategy to generate significant ROI. The winner of this award was Snickers Australia for their "Hungerithm" campaign. 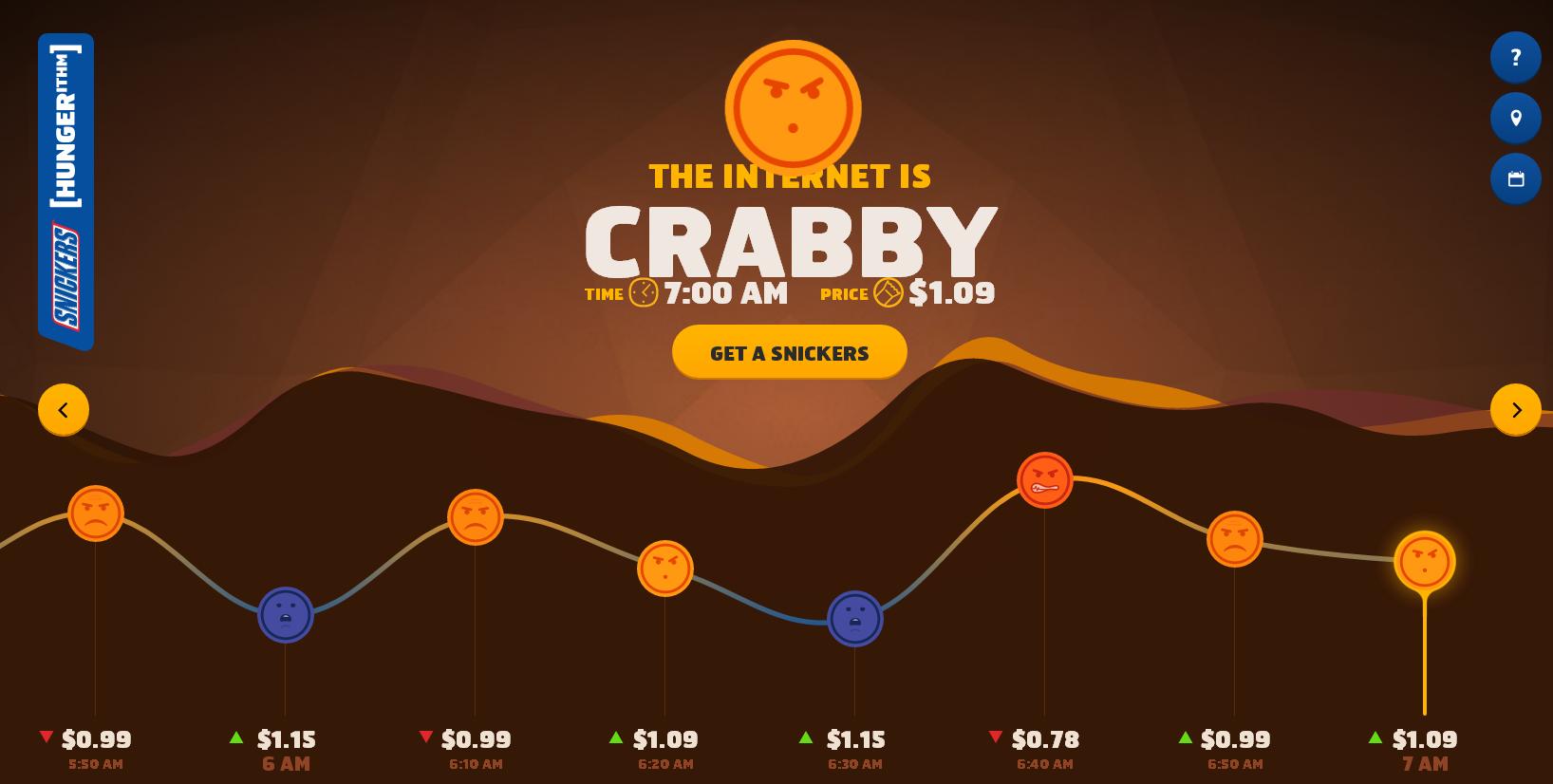 "With the "you're not you when you're hungry" brand story in mind, @SnickersAU discovered that the mood of Twitter gets surlier between meal times. Yes, even the internet gets hangry. The Snickers Hungerithm, an algorithm that monitored Twitter's collective mood and sentiment, came to the rescue. When the mood on Twitter was chill, the price of a Snickers at 7-Eleven stayed at AU$1.75. But when the mood plummeted, so did the price. The angrier the internet became, the cheaper Snickers got. The Hungerithm connected social promotion to in-store purchases by allowing people to check Twitter's mood every 10 minutes and claim coupons on their phones."

The Creativity Award recognizes the most creative and innovative campaign on the platform. The winner of this category was Airbnb.

This weekend, #LiveInTheMovies with Airbnb. What movie would you live in? https://t.co/lvcw7smzTe

"Global rental agency @Airbnb couldn't run a TV spot during the Oscars. In fact, it couldn't even mention the Oscars. The #LiveInTheMovies campaign was the genius workaround that allowed @Airbnb to tap into the massive Oscars audience with funny, personal, and entertaining Tweets.

The campaign asked the Twitter audience which movie it would most like to live in and then Tweeted back with listings that matched their dream locations - a tiny island off of Costa Rica for that one guy who wanted to live in "Jurassic Park," for example. Then @Airbnb really went rogue (and live) by Tweeting listings that looked to be straight out of the Oscar-winning movies, as the winners were being announced on TV."

The Scale Award celebrates the campaign that generated the most worldwide awareness and engagement, and had a major cultural impact. The winner in this category was Dove's "Dear Media".

RT if you take pride in what female athletes do, not how they look. https://t.co/ATzYkfgCRS #MyBeautyMySay pic.twitter.com/BtZG4uQtlJ

"@Dove is a leader in the movement to empower women to define beauty on their own terms. To tackle the sexist remarks written about female athletes before and during one of the world's largest sporting events, @Dove gave fans all over the world the opportunity to Tweet the offensive statements back to the original sources with the hashtag #MyBeautyMySay. It was a powerful, interactive, and quietly confrontational way to bring everyday sexism to light."

The Customer Award aims to highlight the business that excelled most at using Twitter for customer service. The winner of this category was Apple Support.

Made a mistake while using Calculator? Swipe to delete and keep crunching numbers. pic.twitter.com/K8UN2gour8

"The average online customer service response time is a long, grueling 17 hours. Hours. @AppleSupport decided to do something about that sad stat and use Twitter to respond to customer inquiries and comments. Because of the live nature of Twitter they are also able to pick up conversations with customers at any time, and incorporate rich media into responses to provide even more help to people when and where they need it most."

As you may have noted, there was originally six categories - the #Growth Award which aimed to recognize small business use of Twitter ads, is absent. I've asked Twitter why it was excluded, but my assumption would be that they didn't get enough entrants in this category.

It's an interesting overview of some of the top performing Twitter campaigns of the year, with lessons to be learned from each. In particular, it's interesting to note the performance metrics Twitter has used - especially for the Impact Award, which provides direct sales data. Those stats are important, as they bring a more tangible, results-driven perspective to the data, which can help others develop better understandings of how similar approaches could impact their bottom line.

You can visit the Twitter Marketing website for a full rundown of each category, along with Silver and Bronze medal winners in each section to provide further context on what makes a winning Twitter campaign.