New data from Pew Research has found that the proportion of online Americans who use Pinterest and Instagram has doubled since Pew first started tracking social media platform adoption in 2012. Use of Facebook, LinkedIn and Twitter, on the other hand, while it's also grown steadily over the years, is now starting to slow.

The latest Pew report, based on responses from 1,907 American adults, found that neither LinkedIn or Twitter experienced "any significant increase in usage between September 2014 and April 2015". 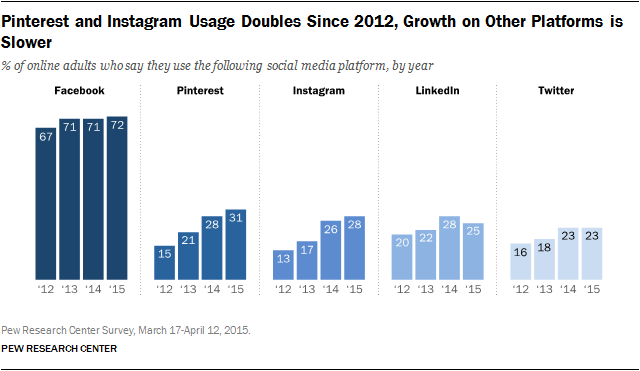 The data actually indicates LinkedIn usage declined on the last survey period, but as the margin of error for the survey was 2.6 percentage points, Pew classifies this result as no growth, rather than a drop. In the case of Twitter, their struggles with user growth are well documented, it's not surprising to see their take up rate remain static, and Facebook has such a huge proportion of the market already, their growth inevitably needs to slow (though it did increase on the previous results). But the lack of growth at LinkedIn is an interesting element, particularly considering LinkedIn reported strong user and engagement growth in their most recent earnings report.

The Pew report also looks at the demographic profile of each network, finding that 77% of female internet users are active on Facebook, and 82% of online adults aged between 18 and 49 are active on The Social Network. 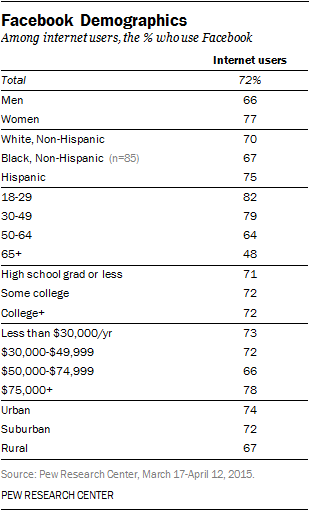 The numbers underline Facebook's ubiquity - even 48% of those aged 65 and over are now active on the platform.

Pinterest's users, meanwhile, still skew strongly towards young females - 44% of online women use the site, compared with 16% of online men. 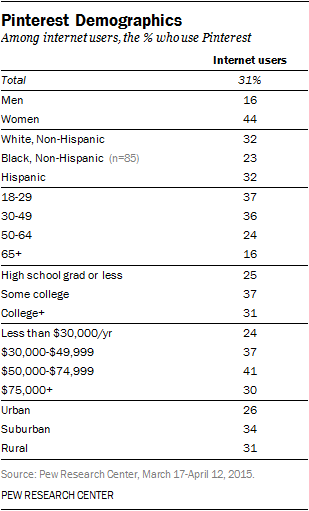 And Instagram continues its rise, with 28% of online adults now using the platform, up from 26% at last report. As with Pinterest, more online women (31%) than men (24%) are active on the network. 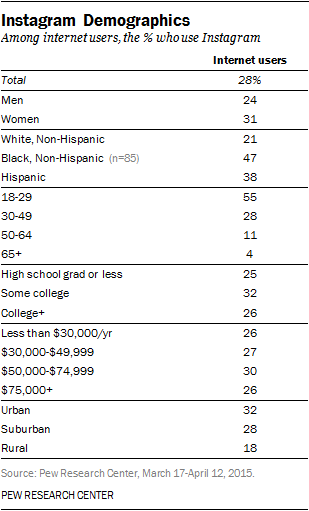 "While there were no changes in overall usership on any site when comparing data from the fall of 2014 and the spring of 2015, a few social media platforms did see an increase in user engagement. The proportion of daily users on Instagram, Pinterest and LinkedIn increased significantly from 2014." 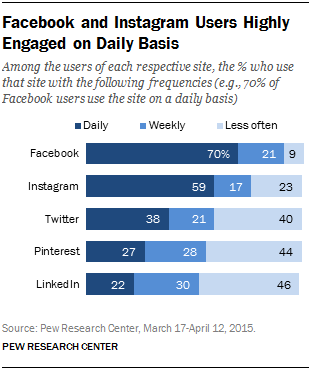 Growth in daily users on Instagram, Pinterest and LinkedIn increased by almost 10 percentage points for each on the previous survey period, a significant jump. So while LinkedIn user growth appears to have slowed, their engagement rate is higher, which may actually be a more relevant result.

The Pew report also looks at the growth of messaging apps, finding that 36% of smartphone owners reported using messaging apps like WhatsApp, Kik or iMessage, while 17% indicated they use apps that automatically delete sent messages, like Snapchat or Wickr. 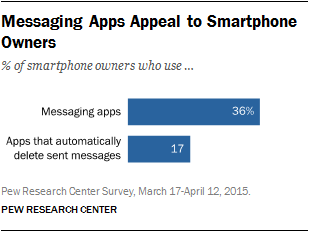 In the younger demographic brackets the popularity of messaging apps was more pronounced - 49% of all smartphone owners aged between 18 to 29 reported that they use messaging apps, with 41% indicating they use apps that automatically delete sent messages.

The findings support another recent report from Refuel Agency, which found that text messaging is the most popular form of communication among teens, leading all other options by a significant margin.

The Pew data reinforces much of what we're being told regularly by other stats and providers - visual platforms like Instagram and Pinterest are becoming increasingly important, and messaging is still the communicative pipeline that connects teens.

In the case of visual platforms, this is only going to become more relevant as we see both platforms introduce new eCommerce and advertising options, which will either bristle existing users or further cement their place as critical channels in the wider social marketing landscape (or possibly both, depending on how they go). If you're not considering how your brand might be able to use Instagram and Pinterest, the numbers show that you should be considering it - maybe they're not for you, but giving each some focussed thought could be a worthy investment of time, even if you ultimately choose not to go down either path.

In the case of texts and teens, the popularity of messaging apps is also something widely known. If you're trying to reach that younger demographic, getting a better understanding of messaging platforms like Snapchat seems like a smart way to go as that's where they're communicating, where they're already active. It also flags a possible consideration for future trends - communicative habits established in our formative years inform behaviors that we carry into adulthood and our professional lives. Could we one day see Snapchat more widely used in a professional setting? Given the data, I wouldn't be ruling it out.