Twitter has today released its latest financial results and performance figures covering Q2 2016. And as expected, the numbers are relatively flat, and failed to meet market expectations.

First, on active users, Twitter's reported that Monthly Active Users (MAU) are now up to 313 million, a slight increase from 310 million reported in Q1. 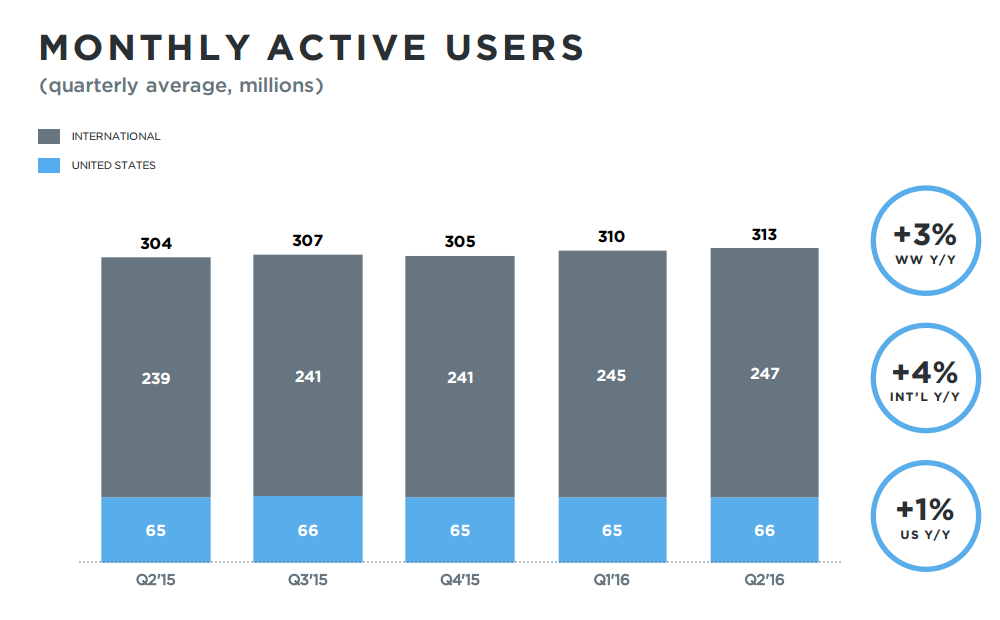 Average U.S. MAUs were up 1% year-over-year, while international MAUs were at 247 million, an increase of 4%. And an important note - mobile MAUs made up 82% of total users.

In terms of what drove that growth and where Twitter's seeing success, in an accompanying shareholder letter, Twitter notes that the recent switch to the algorithm-defined "While you were away..." feature has been beneficial:

"We're seeing continued good results from the enhanced timeline launched in Q1, which helps people catch up on the best Tweets from the people they follow. It drove increased retention and engagement (Tweets, Retweets, replies, and likes) in Q2, and we expect the experience will continue to improve meaningfully over time as our machine learning systems get better."

Definitely, improving their machine-learning and algorithms is an important aspect for Twitter - Facebook's already shown that a personalized algorithm can be great for increasing user engagement and building audience. We've also written previously about the opportunities on this front, particularly in Twitter's on-boarding process, which CEO Jack Dorsey, in the today's earnings call, noted was definitely an area of focus.

But what's quite interesting here is that Twitter's provided no solid numbers or data - no increase percentages or actual engagement figures to support their claims of increased engagement.

Twitter CFO Anthony Noto did provide some additional context on the call, though not much.

Noto said that all the key metrics they track are up, including the DAU to MAU ratio, user active minutes, Tweet impressions and on-platform searches, noting that those last three measures, in particular, are all up "double digits", but he provided no further clarification than that (several questions related to these stats and Twitter avoided specifics in each response).

Twitter also highlighted recent changes to their recommendations of people to follow in the "Connect" tab, as well as their efforts to simplify tweets by removing @names and media attachments from character counts, among other functional additions - the latter of which are yet to roll out. Dorsey said that these changes will make the platform easier to use and, importantly, that there'll be more updates coming soon.

But Twitter's biggest bets are currently on live-streaming, and they made specific note of their progress on this front.

On Periscope, Twitter highlighted recent additions and upgrades, including the ability to keep Periscope content beyond 24 hours, drone support and the ability to embed Periscope broadcasts on the web - along with Highlights, which was released last week.

"We're also working on a deeper integration with Twitter. People can now go live on Periscope from right within the Tweet compose experience in iOS and Android, just as U.S. Rep. Scott Peters did from the floor of Congress during the #NoBillNoBreak sit-in."

It's no surprise Twitter made specific mention of the House of Reps protest, some saw the live-streaming of that event - which was subsequently broadcast on C-SPAN - as a watershed moment for Periscope and wider public awareness of the app.

Twitter also said that they're improving their live-streaming video experience within Twitter to enable greater support for all kinds of live-streamed content, including entertainment, news, and sports.

On this front, Twitter's announced a range of new deals to broadcast live programming, including the U.S. Republican and Democratic National Conventions and Bloomberg TV content, as well as deals with Campus Insiders, Major League Baseball, the National Basketball Association, the National Hockey League, Pac-12 Networks and the National Football League.

Noto cautioned that they won't see any significant revenue impact from these deals in the next quarter (as much of the content will start streaming after that), but that they will have new advertising potential, via pre-roll and mid-roll ad content.

And Twitter also made note of their acquisition of Magic Pony, whose machine learning and visual processing technology will help Twitter deliver high-quality streaming video at lower bandwidth, "improving the watch experience on mobile devices".

In terms of revenue, the results were not overly positive. 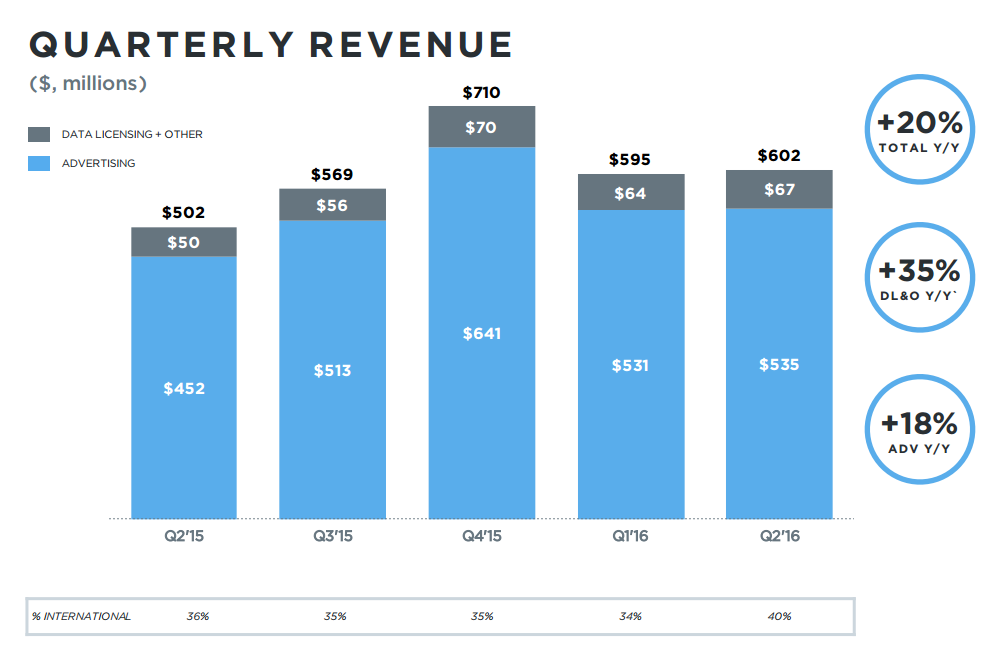 Analyst expectations for the quarter were $607 million, which, as you can see, Twitter has missed. Twitter also downgraded their Q3 guidance, which sent shares down around 50%.

Twitter said that they're seeing less overall advertiser demand than expected, continuing the trend of the last quarter. Twitter noted increased competition for social budgets and CPE pricing as two key issues they need to address in their service to help boost ad performance.

"To unlock budgets, we'll need to launch additional features and functionality over the next few quarters including accurate audience verification, reserved buying, and reach and frequency planning and purchasing."

Twitter also highlighted the purchase of TellApart, giving them "a solid foundation on which to build solutions designed to consistently deliver ROI for performance advertisers at scale" and the introduction of the new Twitter Dashboard app, which will help drive business adoption and usage. 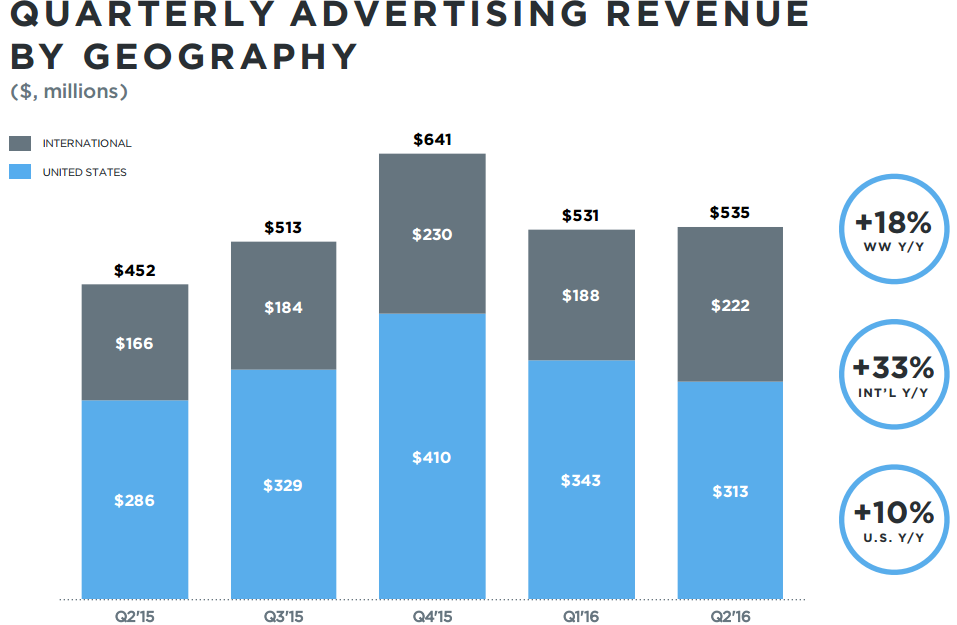 Overall it's another mixed report card for Twitter - and as expected, much of the emphasis is on the live-stream content deals they've signed and the possibilities those new options will bring.

Dorsey also made note that Twitter's main emphasis is on real-time news and social commentary, those are the two areas Twitter's now focused on promoting and enhancing within their experience. And while both of those are pretty much what you'd expect Twitter to be looking at, it'll be interesting to see what new additions they can come up with the better showcase those elements and improve the user experience. For example, Dorsey noted that they're looking to do more around notifications on breaking news content.

With this, and the aforementioned note on more platform changes coming - and the continued pressure of their under whelming performance - we can expect to see more changes and updates flowing through Twitter in the coming months. Most of those will be around enhancing live events coverage, no doubt, but expect Twitter to also continue looking for enhancements to simplify and streamline the user experience, and uncover the latest trends and news as it occurs on the platform. Should be some interesting times ahead.