Twitter's Q3 numbers have been released, leading to share drop of more than 12% in after hours trading. The main reason behind the drop was Twitter's user growth figures, which showed the platform has increased by only 4 million monthly active users, in total, since the last earnings announcement. 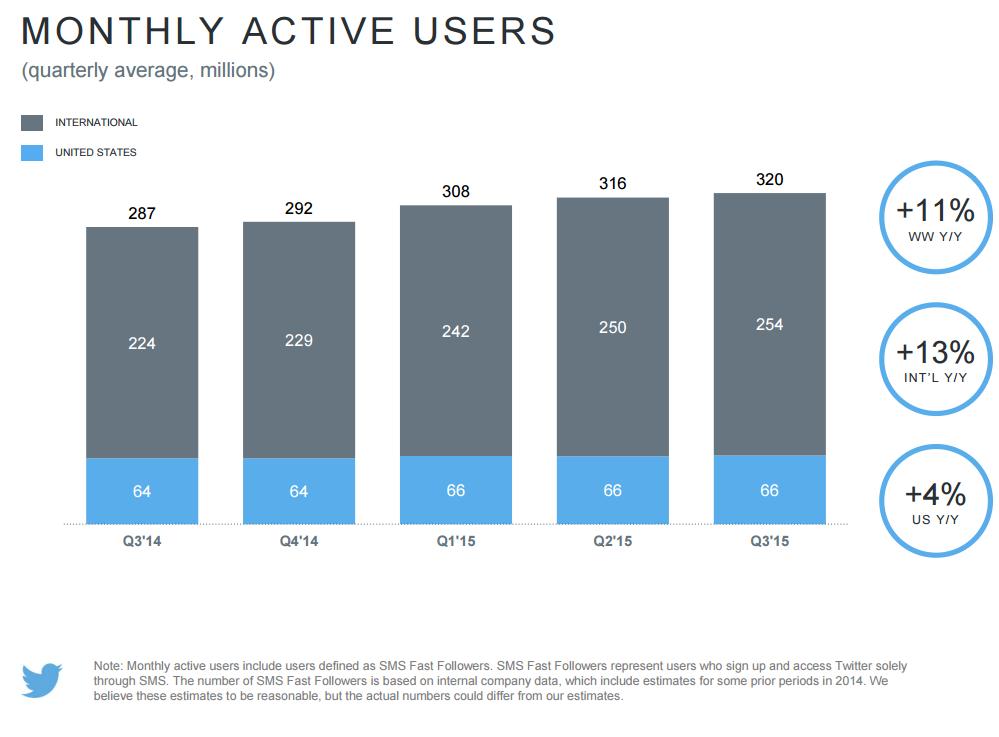 As shown in the above, user growth in the US has remained flat, while growth in international markets has increased only slightly. Analysts had expected user growth to exceed 324 million, and the platform's failure to meet that has sent shares tumbling, with confidence in its long-term viability still a significant concern.

In some respects, the market may be attuned to an unfair comparison in this regard - inevitably, all social platforms are going to be compared to Facebook's unprecedented user growth, yet it's unlikely any of them will ever achieve expansion on the same level. That said, while Facebook is four times larger than Twitter, they still managed to add 49 million new monthly users in the second quarter, showing that despite the ubiquity of social networks, significant growth is still possible, underlining the market expectation for better performance on this front from Twitter.

In terms of revenue, Twitter posted a 58% increase, year-on-year, pushing up to $US569 million, again beating analyst estimates (high end expectation was $US560 million). 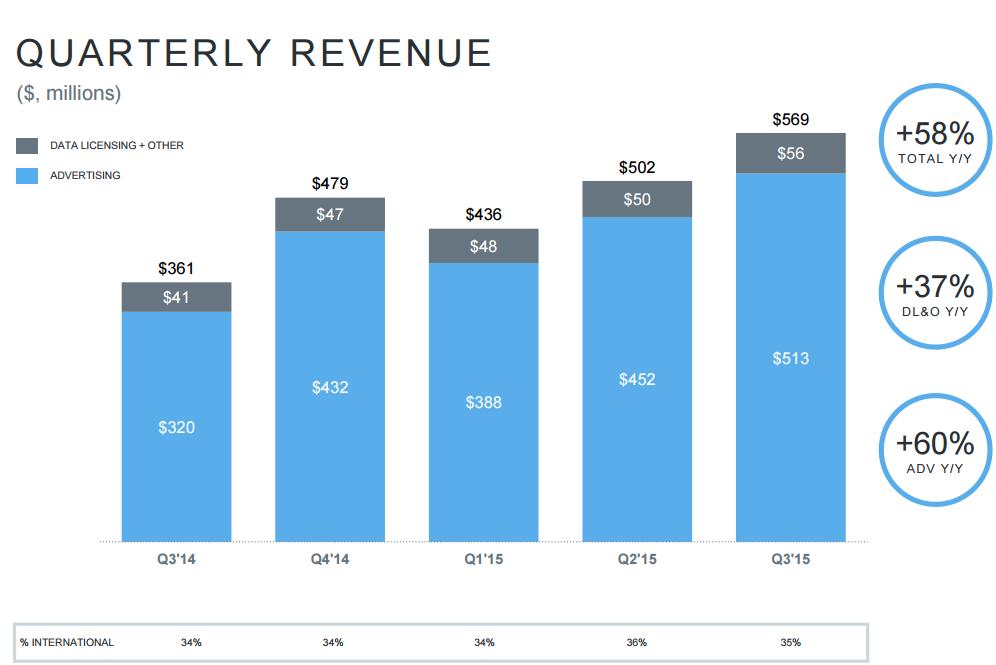 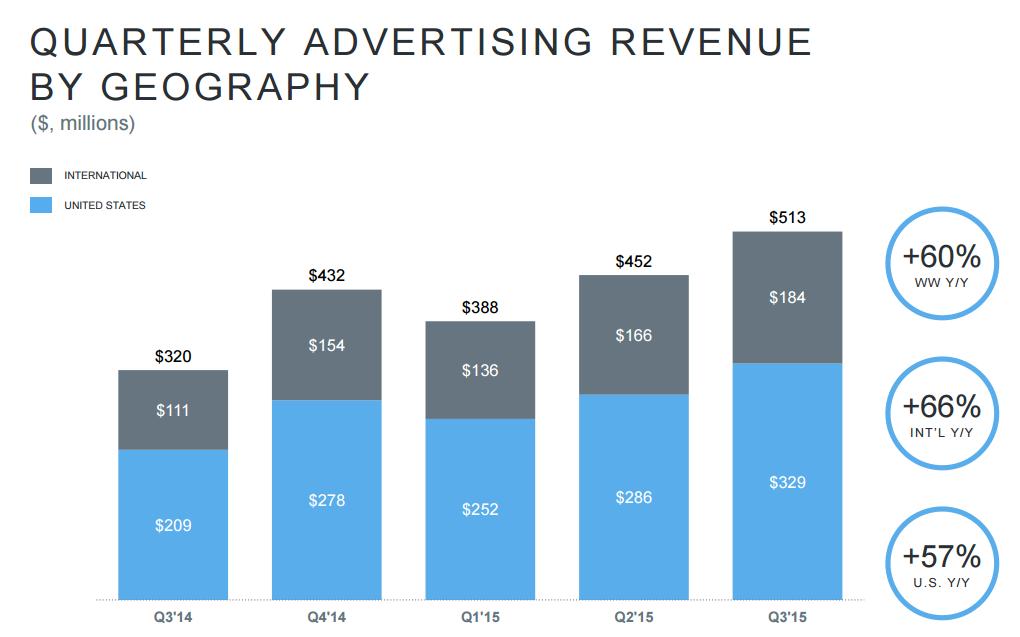 Twitter had already pre-announced that revenue would be at the top end of forecast, so the result wasn't a surprise, but it does bode well for the platform amidst the continuing gloom around user growth. And it is a key point to note - while user growth is slow, Twitter is still making money. A lot of it. The growth potential of the platform is still significant - while some have been quick to proclaim the pending death of the micro-blog giant, the company is doing reasonably well, in general terms. While its longer term prospects have analysts spooked, they still have scope to work with in this regard, and better than expected profits give them some breathing room to do it. That said, Twitter also predicted that revenue will be between $US695 and $US710 million in the current quarter, trailing analyst estimates of $US737 million.

In today's earning call - which was broadcast on Periscope and streamed through Twitter's Investor Relations channel - newly appoint CEO Jack Dorsey talked up the platform's strong financial performance and incremental growth in users. Interestingly, Dorsey again highlighted the platform's 'logged out' audience - people who are exposed to tweets without ever actually logging into the service - noting that along with their 320 million MAUs, Twitter also has more than 500 million logged out viewers, taking their total audience to over 800 million people who use Twitter every month. Dorsey then expanded that further, saying that there's also an additional "1 billion unique visits monthly to websites with embedded tweets". This kind of extrapolation takes a bit of creative license, but the point is valid - the audience of people exposed to and influenced by tweets is far more than the noted monthly active user count. How you measure the impact of that is more questionable, but clearly, Twitter is trying to highlight that user growth is not as bad as the basic numbers might suggest.

Dorsey also discussed the company's recent decision to reduce their workforce by 8%, saying that he strongly believes the company will be able to move faster under their revised work structure, which puts a focus on "smaller, nimbler teams".

Dorsey also noted some of the highlights of the most recent quarter, noting their progress in adding additional tools and features, including 'Highlights' (for Android), Twitter Polls, and additional features for Fabric. Dorsey also discussed their new 'Moments' offering, saying that "Moments is the simplest way to see what's happening in the world, all organized by topic". Dorsey then shared some of the best moments they've seen so far, including the Washington Post's Paris Fashion Week coverage and Mashable's 'Moment' of the South Carolina Floods.

"When amazing things happen in the world, we see them right on Twitter, Periscope and Vine." Dorsey said. The ability to communicate that will remain a challenge for the platform moving forward.

Bain also took the opportunity to talk up the potential of Promoted Moments, noting the first promoted Moment, for the upcoming film 'Creed', was released the weekend just passed. Neither Bain nor Dorsey gave any metrics on Moments, saying that while they're excited about the possibilities, the product's only been in circulation for three weeks.

One interesting point from the Q and A portion of the call related to the new partnership with Google, with tweets in search providing billions of additional impressions for tweets every day and increasing referral traffic.

Overall, the Twitter Q3 results were pretty much as expected - it's too early in Dorsey's reign to see any significant changes, though the ever more stagnant user-growth chart remains a primary concern. Additionally, the lowered revenue projections for Q4 also don't bode well, but the company does have some capacity to work with, and some time to turn the ship around. That time is running out from Wall Street's perspective, no doubt, but the residual positivity stemming from Dorsey's appointment is still somewhat present, and has many hoping for a brighter result once we have a full quarter of figures under the new CEO.