The social app's latest invention - which enables users to record and upload video content direct from their sunglasses - has been generating a heap of buzz, due in no small part to Snapchat's (or Snap Inc's) hype-fueling marketing strategy of dropping their Snapbot vending machines in random locations, with no notification given on where the bots will be next.

To help track them down, Snapchat has added an interactive map to the Spectacles website, but even that's been of little use, as the bright yellow vending machines have been selling out so fast that it's almost pointless to travel to them unless you can get there with the first group.

Snapchat's also been a little tricky with their placement - there was even one at the bottom of the Grand Canyon last week.

And while this serves a purpose in driving anticipation and demand for their latest offering, it also makes sense for Snapchat to capitalize on the existing interest now. That's why they've opened their first Spectacles store in NYC. The store is on the southeast corner of Central Park, opposite the Apple store, and it's hard to miss with its distinctive "yellow eye" frontage. 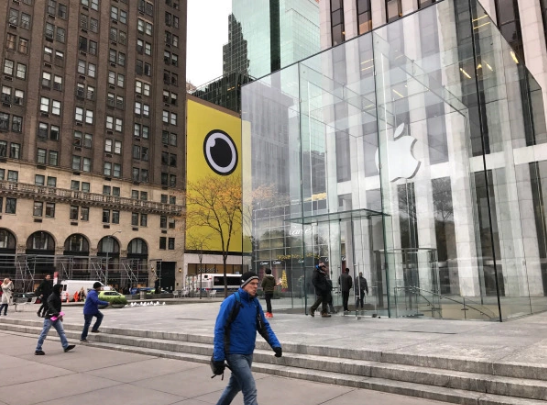 Inside, there's a single Snapbot vending machine - but the key difference here is that the machine is being re-filled regularly, and will remain in place from now until New Year's Eve, which should give plenty of people an opportunity to 'snap' them up (rather than having to buy them off eBay for thousands).

As noted, Spectacles have triggered a huge amount of hype, with tech enthusiasts and fans eager to get their hands on a pair. And given they're selling for a comparatively cheap $130 a pop, you can image that a lot of Spectacles are going to be lighting up across NYC over the holiday season.

And that's an important reminder - with more and more Spectacles in circulation, take note of the fact that when that little light is on...

...so are you - so if you don't want to be part of someone's Snapchat Story, steer clear or ask them to switch them off.

And while the hype train is pushing ahead at full steam, there have been some criticisms of the new glasses. Over on Business Insider, writer Avery Hartmans has listed her five biggest gripes with Spectacles, including the lack of real-time playback, poor performance in low light and poor integration with the Snapchat app. But even with these noted issues, it's pretty clear that Spectacles are going to be making an appearance on many Christmas shopping lists.

And if they become a big hit, they could spark Snapchat's next steps into augmented reality and transferring their in-app experience to the real world, helping them stay in competition as Facebook encroaches further into their territory.