Twitter has today announced a new update to iOS which makes it easier for users to undertake more actions directly from their timeline.

Starting today on iOS: It's now easier to act on any Tweet directly from your Home timeline! https://t.co/QhNvcqZoPn pic.twitter.com/NjQzgKqm3E

As you can see, there's now a new listing of options direct from a drop-down menu from any tweet - previously, you'd have to click onto a tweet then press the "three dots" to access the same menu. And there's a couple of new features that have been added - and one, in particular, that's of interest.

Do you see it? 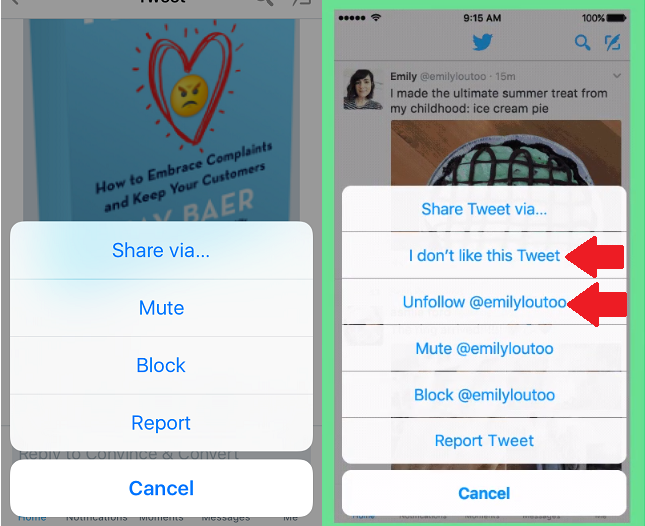 "When you mark a Tweet as "I don't like this Tweet", it helps Twitter better understand the types of Tweets that you'd like to see less of in your Home timeline. We may use this information to optimize and tailor your experience in the future."

Sounds very similar to this:

And that's interesting because Facebook uses those signals to refine and improve their News Feed algorithm, tailoring it to your individual preferences, which is an area that Twitter has, traditionally, not put a lot of focus on.

But personalization is something Twitter definitely needs to be looking at - and as such, the introduction of such an option is a good sign for future developments.

One of the reasons Twitter has lost ground against other social networks in recent years, has been that lack of personalization and experiential response to individual user behaviors. Of course, that's not necessarily Twitter's game - their priority is in delivering real-time news and updates, so they can't switch to a wholesale Facebook-style algorithm and only show you the top posts all the time, that would go against what the platform is all about. But there are areas Twitter can, and should, improve on this front - and slowly, they've been adopting machine learning systems to do just that.

The most obvious representation of this is their much debated algorithm-defined timeline. Introduced back in March, Twitter's personalized feed only applies to content posted while you're not logged in to see it, highlighting the best tweets based on who and what you've previously engaged with. And despite the noise around that change, it's actually producing good results - in their Q2 results announcement, Twitter noted that:

"[The enhanced timeline] drove increased retention and engagement (Tweets, Retweets, replies, and likes) in Q2, and we expect the experience will continue to improve meaningfully over time as our machine learning systems get better."

While some debate the merits of algorithms and whether they're able to improve the user experience, evidence shows they work - and with more people posting more content to social platforms more often, there's a need for some level of editorial intervention. The platforms that win out will be the ones that can highlight the most meaningful stories to each individual user - if you can log on and be shown the top stories you want to click on, that'll obviously keep you on platform for longer. And the longer you're online, the more on-platform content you're likely to look at, the more actions your likely to take - and the more ads the platform can show you to maximize that opportunity.

On this, Twitter CEO Jack Dorsey highlighted their recent machine learning developments in an interview with Fast Company published earlier this week

"We've been enhancing the timeline this year and making sure that when people come back to Twitter, they see what matters most and what's important, and they can quickly get back to recency in everything, and live. What will blow people away is, I'll be able to open up Twitter in the morning and see exactly what I need to see. And it's not just what I like, it's what's important. I think that's our role. It's really showing what's important in the world."

The new iOS change is clearly along these lines, and it'll be interesting to see just how refined and how attuned Twitter's timeline can become based on these expanded inputs.

One area that Twitter could (and should) use machine learning systems to improve is on their "Trends" and "Who to Follow" recommendations - as we've written about before, at present, those lists are largely unfocussed, with generic trending topics and vague suggestions of who to follow, normally just the highest profile accounts.

But tools like Nuzzel and BuzzSumo show that there are already ways to use Twitter data to highlight more relevant content - if Twitter's able to use such indicators to better personalize the user experience, and ensure each section presented to each user is being tailored to your interests, that'll go a long way towards helping generate more engagement and improve the Tweet process.

As Dorsey notes, they are working on this, and you can expect further developments to be on the way. This new addition, while it may seem minor, is a positive step in the right direction.