Who's on Snapchat: The Changing Demographic of the Yellow Ghost 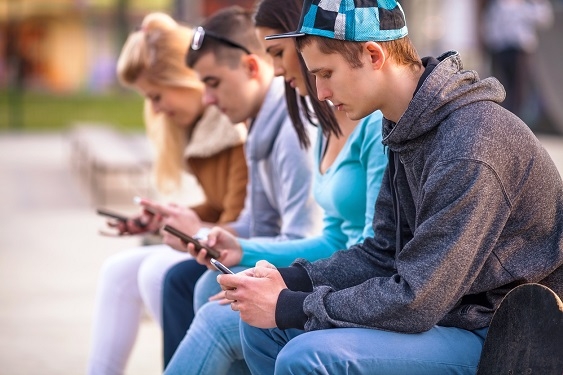 Snapchat's parent company, Snap Inc., recently launched their IPO, which has inspired a heap of discussion about the company and its future. And after a splash of a debut, concerns appeared to be rising about Snapchat's growth relative to its competitors, with negative sentiment now starting to filter in.

Demographics play a huge part in this - Snapchat's often dubbed the social network of choice for teenagers, but it's easy to forget that there are other age groups also snapping.

So just who, exactly, is on Snapchat right now?

Who's Not on Snapchat

Let's first start off with the demographics that aren't using the platform - unsurprisingly, marketers definitely shouldn't focus their efforts on Snapchat if their audience is Generation X or the Baby Boomers.

According to Hootsuite, in 2016 only 12% of Snapchat users were ages 35-54, and those older than that were a single digit percentage.

It's fair to assume at this point that Snapchat isn't going to become part of the daily social routines of older generations.

When you look at the demographics aged 34 and younger, however, things get more interesting.

To start with, more than half of new Snapchat users are actually over 25 years old. In fact, this segment is growing twice as fast as users under 25. 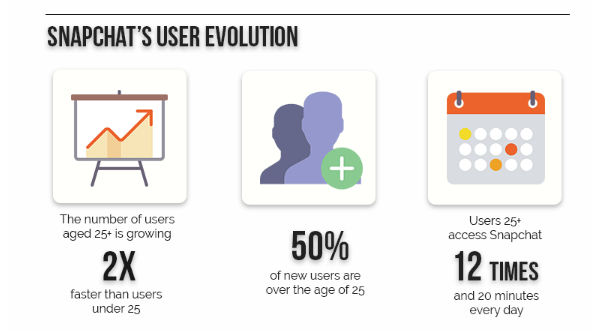 You may have assumed Generation Z was where Snapchat's growth was coming from, but more recently, it's actually been the Millennials leading the charge.

Similarly to Generation Z, Millennials primarily use the app to share stories and to send snaps to their closest friends and family.

Variety surveyed Millennials on their Snap habits, and most said they sent an average of 2-5 snaps per day, with 73% of them sending snaps and stories among their closest peers. In addition, 69% said they used the chat feature regularly.

And worth noting for brands - only 54% of these users followed celebrities, 50% followed people they'd never met (e.g. influencers), and only 47% said they followed brands.

Business Insider also interviewed 18-26 year-olds about Snapchat. Interestingly, they all said they discovered and downloaded the app via word-of-mouth from their friends and family. They unanimously didn't trust or plan to use Snapcash in preference of Venmo, and many said they were beginning to snap with their moms.

Millennial moms using Snapchat can be interesting for the future of Snapchat's user makeup. Will Generation Z start to leave in droves as Mom starts sending them snaps and watching their stories? Without a doubt, marketers seeking to reach "cool moms" should see an opportunity here. This is a big change for Snapchat - its key demographic is beginning to skew older.

While their growth may be stagnating, Generation Z (or "the teens") still account for a majority of Snapchat users - but their habits and behaviors can be different from their Millennial counterparts.

Snapchat drives life sharing from Generation Z, and FOMO (the "fear of missing out) is what fuels it. Most teens are snapping, sharing, and chatting with exclusive members of their social circles on the app. Things are more casual on Snapchat, while behavior on Instagram tends to lean more toward emotional. Experts believe that that Snapchat virtually mimics face-to-face interaction, but users are not pressured to present a "perfect" version of themselves.

So if teens are talking to their closest friends on the network, where do brands fit in?

Brands need to interact in order to be successful - they need to consume and create content similar to an actual Snapchat user. For example, running video ads among stories should feel like an integration and not an interruption.

Generation Z grew up with instant access to news and information, and exposure to world corruption, the recession, and global crises have molded their views and goals. They want to make the world a better place, and brands that can tune in to that internal desire to do good can strike a chord with this demographic.

In terms of medium, video consumption is important to teens. They're still watching TV, but they watch internet video 2.5 times more. YouTube still dominates here (e.g. the popularity of YouTuber personalities), but Snapchat is definitely another platform for brands to get on board with.

Millennials and teens both present huge opportunities for marketers on Snapchat. While Snap Inc. may be under the microscope of the media, it's important for marketers to plan and execute for this new wave of a changing Snapchat user base.

This was originally posted on Likeable Media's blog.