LinkedIn's Publisher Platform: Should You Use It? 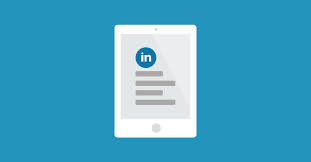 'Starting today, LinkedIn is opening up our publishing platform to our members, giving them a powerful new way to build their professional brand. When a member publishes a post on LinkedIn, their original content becomes part of their professional profile, is shared with their trusted network and has the ability to reach the largest group of professionals ever assembled.'

Like all bloggers, I was interested, especially when in the same announcement, LinkedIn Head of Content Ryan Roslansky noted that the average Influencer post gets 31,000 views, 250 likes and 80 comments. Even if you can get a fraction of that, that's great engagement and a powerful way to build your personal brand. I was keen to know more, but approached the announcement with a degree of scepticism at the same time.

The feedback I've read about the platform has been excellent. Well known social media identity Barry Feldman reported that one of his first posts received more than 10,000 views and was shared over 1,000 times. Andy Yeo, a strategic manager at Hootsuite, reported that one of his posts got more than 77,000 views, 800 likes and 200 comments. Todd Wheatland of King Content got more than 117,000 views, 2000 likes and 500 comments on one post. These are great numbers, and all three noted their amazement at the levels of engagement they'd received. Definitely it's a huge endorsement for the new platform, getting such high figures early on, but still I had my doubts. There was a pattern to these reports, a common factor that alters the outlook of the new function for many of users. A significant part of the reach of all these posts was the base audience for each writer, the amount of connections they have to start with. This element plays a major part on how well your content is distributed through the network.

The three people mentioned above all have very high connection counts. All of them are well above the 500+ limit - Barry, as noted in a piece he wrote on the new platform, has 1, 736 connections. I took a look through the top posts on LinkedIn and all of them were either from Influencers or people with 500+ connections.

In the LinkedIn documentation it notes that your posts will be shared with your immediate network, but:

'Interactions such as likes, comments, and shares will distribute your content beyond your immediate network.'

So the idea is that people in your network give it a tick, then more people see it, beyond your connections. This being the case, having an established network is going to play a major role in how much reach your content gets - but how much of a role exactly? The only way to confirm this was to conduct my own test, see what reach my content would get.

I've now posted three pieces on LinkedIn, with view counts of 466, 403 and 690. Small numbers in comparison to the thousands of views reported by others. My connection count is 197 (I know, I'm working on it), so understandably I'm starting from a much lower platform to begin with, but for the purposes of this experiment, this is perfect, as I'm trying to find out how much influence the distribution algorithm plays in how content is shared. If you can get high readership despite not having a heap of connections, it's possible that the network has a good method for detecting and rewarding good content by delivering it to a wider audience - though my experience has shown that's not the case. But of course, that's assuming I'm writing good content to begin with, the only way to fully confirm my theory would be to post one of the same articles on another platform, like Social Media Today.

My most recent piece was posted on LinkedIn and Social Media Today. The comparison is as follows.

As you can see, the piece performed much better on Social Media Today, showing that it was, at least to some degree, 'quality content', but due to my lower connection count on LinkedIn, I didn't get the distribution that other users have experienced. This makes sense, of course, you can't distribute your message without an audience to distribute it to (true of all social media platforms) but worth nothing for those considering posting on LinkedIn - it's unlikely your blog is going to get major traction if you don't have a high connection base to begin with. Your connection count, and engagement from those connections, will play a big role in how your content is spread.

Crowd-Sourcing as an Editorial Process

Effectively, the sharing algorithm is an editorial process in itself - this is no doubt why LinkedIn felt comfortable going with the 'free-for-all' option. The biggest concern of opening up the platform is users could end up inundated with poor content because it's not filtered through a formal process. But that's unlikely to happen. First off, the content that's going to get high reach is going to come from those with large, established networks. People with a lot of connections are less likely to be publishing poor quality blogs - you don't build a network without being able to demonstrate expertise and professionalism in the first place. Those users are a pretty safe bet, in terms of publishing content that will be of good quality and relevance to their audience. Second point, users who don't have large network on LinkedIn are unlikely to get alot of reach with their blogs. The ones that do spread beyond their first degree connections will need to get a lot of engagement to do so, which will only happen if the blog is extraordinary. It's quite a clever system, though it does mean users need to build their LinkedIn network first, which, for most, means making a name for yourself outside of the LinkedIn platform.

Should You Use the LinkedIn Publishing Platform?

Effectively, the LinkedIn publishing platform is a true expansion of the Influencer program. This is pretty great in itself, the insights provided by industry thought leaders, like the three mentioned here, are highly valuable, and getting more of these experts to share their ideas and experiences can only benefit the LinkedIn user base. If you're an influencer in your field, with the number of LinkedIn connections that come with such status, the publisher platform gives you an opportunity to expand your network and showcase your expertise. If you're not an influencer, and you don't have a network established, there are probably better options to build your personal brand before posting on LinkedIn. Guest blogging sites, like Social Media Today, remain a solid option for building your reputation and expanding your network. Once you've formed your personal brand and grown your LinkedIn connection base, blogging on the LinkedIn platform looks to be a good option for continued outreach and engagement. The process is easy to use and, as noted, the reach potential is great. You just need to beef up those connections first.

So, anyone want to connect?