Which should you focus your content efforts on - short-form content, or longer, more in-depth posts? There's reliable research to back up both - BuzzSumo's analysis of more than more than a million articles, conducted last year, found that long-form content (posts of over 1,000 words) consistently receives more shares and links than shorter form content. At the same time, researchers have found that the average human attention span has dropped by 33% since the year 2000, a decline largely attributed to increased mobile phone use. And given the rapid increase in mobile media consumption rates, the logic would suggest that people want shorter content.

So which one's better?

To help answer this, Pew Research worked with web analytics firm Parse.ly, to analyze how users interacted with more than 74,840 articles from 30 prominent news websites in the month of September 2015. Their research looked at the time users spent reading content (and how that related to content length), as well as how the users of different social platforms interacted with the articles, along with other usage patterns and trends.

Despite declining attention spans and smaller screen size, Pew's research team found that readers spend around twice as much time reading long-form news content via mobile device as they do with short-form posts.

This shows that readers are willing to engage more with long-form content, despite the noted differences in mobile behavior.

As noted by Pew:

"If the average engaged time for long- and short-form articles is about the same, then one might presume that there is some natural attention limit beyond which a typical newsreader on their cellphone is unwilling to go. If there is a difference, that suggests that readers may be willing to commit more time to a longer piece of work, up to some unknown threshold."

Pew's researchers looked even deeper into this, finding that engaged time increases steadily as the word count of articles goes up. 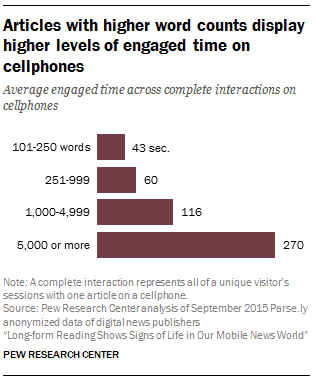 And worth noting too, those times, measured in total seconds, may not seem like much - 116 seconds, less than two minutes, spent reading a 1,000 to 5,000 word article is surely not enough time to thoughtfully consume a post of that length.

"..our analysis indicates that this metric almost certainly underestimates the real time spent reading or watching a news story. Specifically, the Parse.ly metrics capture screen movements such as scrolling or clicking, within 5.5 second intervals. While more precise counts of actual user engaged time may still be out of reach with existing methods, what is of most value is the relative difference that emerges between long- and short-form stories."

Essentially, Pew's saying that the time spent, itself, is likely underestimated, but the difference in attention is more reflective, showing that mobile users are willing to spend more time with longer content. Short posts aren't necessarily the only way, or even the best way, to reach them.

In the aforementioned BuzzSumo study, BuzzSumo's research team found that despite the stronger performance of longer form content, in regards to shares and links, the vast majority of the posts in their study group - 85% to be exact - were still short-form, which is defined as those less than 1,000 words in length.

"Either people ignore the data or it is simply too hard for them to write quality long form content."

Pew's researchers found similar, with 76% of the posts in their research pool being short-form. 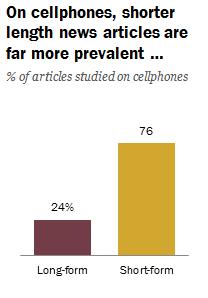 Yet at the same time, long-form content attracts almost the same amount of visits, on average, as shorter material. 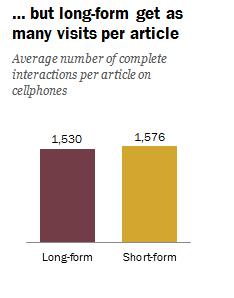 As per Pew's report:

"This doesn't necessarily mean audiences are asking for more long-form content, as there's a strong likelihood that most users aren't aware of story length when they click on a link. Still, long-form articles do, whether through shares, bookmarks or other means, find their way to as many initial visitors as short-form."

If you were thinking your short form posts might generate more attention, these figures show that post length doesn't play a significant part in driving people to your content.

In what might be an expected, yet relevant, note, Pew's team found that readers spend more time consuming long-form content on weekends - particularly in the morning - than they do on weekdays. 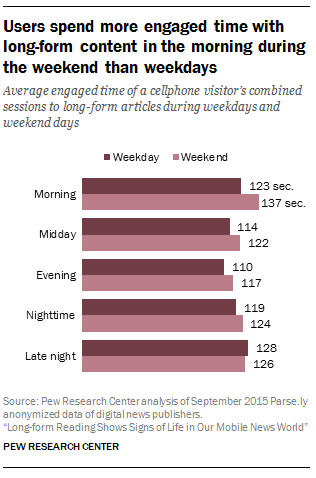 Given this, looking to schedule your longer form content for weekend mornings might be a beneficial approach - or at the least, something worth testing.

Pew also found that while Facebook sends a significantly greater volume of readers to content, Twitter users actually spent more time consuming news material once they get there. 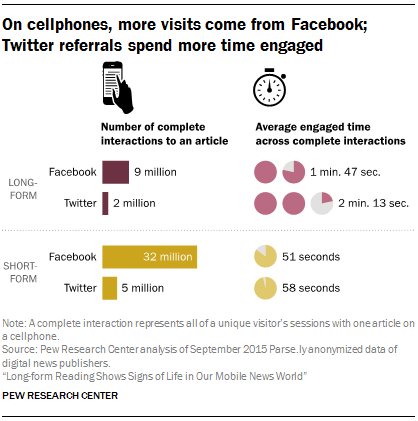 Overall, around 80% of social referrals to news articles come from Facebook, with a much smaller portion (16%) coming from Twitter. Those findings are pretty much in line with what you'd expect - Facebook's far bigger than Twitter and drives way more referral traffic, underlining how important it's become as a source of outreach for many publishers. But Twitter readers, who are maybe a bit more news savvy and tuned into the latest happenings, actually take more time to read and absorb news content. Pew's data shows that Twitter users spend 24% longer reading longer content over those who've come to a post of similar length from Facebook.

Bounce rate is one of the key metrics of focus amongst online marketers. And for good reason - if people are coming to your site, checking one page, then drifting off, that's an indicator of a poor user experience.

The interesting things about bounce rate is that it depends on what your objective is - it may be that you only want or need a visitor to check that one page. And while it would be great to have people stick around and check out more of your content - and ideally, become more interested in your offerings - Pew's data shows that the bounce rate for news publishers, in particular, is almost inevitably going to be high.

As per Pew's findings, 72% of people who read long-form articles, and 79% of those who click through to a short-form post, view just one article on a given site over the course of a month on their mobile device.

While, as noted, having the majority of your site visitors bounce is not a desirable outcome, Pew's data shows that it's a relatively common trend amongst mobile readers. Finding ways to keep mobile users on site could yield big results - but again, such metrics should be considered in the context of your wider strategic aims.

There's a range of other insights in Pew's full report, including engagement levels relative to publication date and data on return visitors, and it's well worth a read, particularly for anyone actively engaged in web publishing.