A Civil Rights Organization That Does Social Media Right

One organization that does a really good job of both reporting on civil rights and sharing their information widely is the Southern Poverty Law Center.

"...dedicated to fighting hate and bigotry and to seeking justice for the most vulnerable members of our society. Using litigation, education, and other forms of advocacy, the SPLC works toward the day when the ideals of equal justice and equal opportunity will be a reality."

SPLC communicates on a lot of channels, including Twitter, Facebook, YouTube, and via an email newsletter. It has a quarterly magazine called The Intelligence Report, and their website includes articles and files on extremists. But they also file lawsuits, and one of my friends saw fliers with their information about the so-called "alt-right" in restaurants in Charlottesville this summer.

Parts of SPLC function like a newsroom - their staff includes investigative reporters, and the center does research and reportage. It reveals injustice in the hopes that it will be addressed.

The information that SPLC shares has a few intrinsic values that other purpose-driven organizations likely have also. The significance of the issues that SPLC covers - monitoring hate groups, teaching tolerance and inclusion, and seeking justice - is indisputable and relevant to the lives of many Americans. Their issues are also often in the news, which makes them even more visible. No newsjacking for the SPLC; instead, their issues show up on front pages all the time.

Another intrinsic value of SPLC content is that it provides information that people can't find elsewhere. Their investigations often become news stories in other outlets.

The tone that SPLC takes on social media is straight forward and logical. It reads as evenhanded and unambiguous, but it's also accessible.

Immigrant detainees often have to represent themselves, but a GA detention center denies access to its law library. https://t.co/YHj5CmbZ34 pic.twitter.com/1YktVCtKTO

It makes sense for a center that includes many lawyers to use an exact and unemotional tone. The clarity that SPLC uses in its communications is necessary for dealing with rhetorically complex subjects such as hate groups, which use their own communication channels to try to rationalize their hate and convert others.

On Twitter and Facebook, SPLC links to their own content and articles from other new outlets that deal with their core issues. Their commentary on links is mostly contextualizing.

The imagery that SPLC uses often shows hate groups with their symbols, which is jarring and unpleasant, but effective in garnering attention.

The SPLC website has an illuminating digital feature: the Hate Map, which shows where hate groups are in the U.S., enabling viewers to look at their own communities. 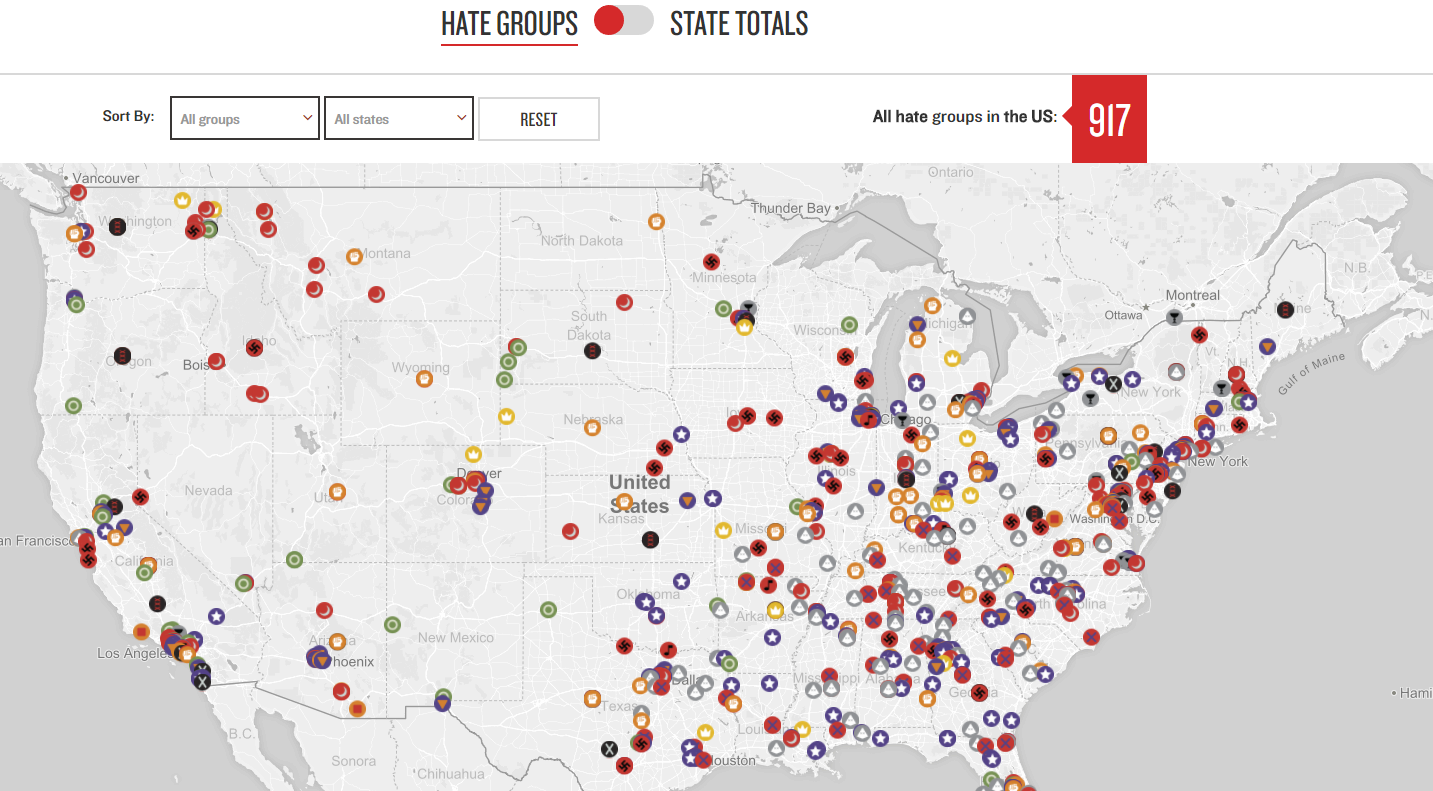 Advocacy for the Online Space

SPLC also sees social media as a space in which advocacy is necessary. SPLC has been trying for more than a year to get Facebook and PayPal to shut down accounts that belong to hate groups.

"They have policies against violence, racism, harassment," said Keegan Hankes, analyst at the Southern Poverty Law Center's intelligence project in an interview with the AP. "The problem is that there has been no enforcement."

"Before and after Charlottesville, PayPal cut off payments to groups that promote hate and violence," according to an AP article. "GoDaddy and Google yanked the domain name for Daily Stormer following the rally. Facebook, Twitter and Instagram are removing known hate groups from their services, and the music streaming service Spotify dropped what it considers hate bands."

Though most of SPLC's content takes a rational rather than emotional tone, the videos it produces can't help but strike a strong emotional chord because they show real people in distress and victims of injustice. They show the aftermath of hate and consider the people who commit acts of hate. It's not easy viewing, but it feels important.

I often talk about organizations being motivated by a "why" and making that "why" clear in communications. SPLC does an amazing job of connecting their "why" with the plight of victim's of injustice and against perveyors of hate.

This post was originally published on the Ignite Digital blog.