“If you’re sticking with your content approach from three years ago, it’s now 50% less effective.”

This first line in BuzzSumo’s latest Content Trends report certainly grabs attention, and definitely, if you’re working in digital or content marketing, it’s worth looking over their stats and getting an understanding of the current lay of the land.

BuzzSumo, which analyzes content performance based on social shares and links, looked at 100 million articles published in 2017 to get some perspective on the latest trends and shifts, and see what impact algorithm shifts and social platform changes are having. And the data's certainly eye-opening – BuzzSumo’s key finding is that social sharing of content has been cut in half since 2015, with the majority of content seeing very few shares, and generating zero backlinks. 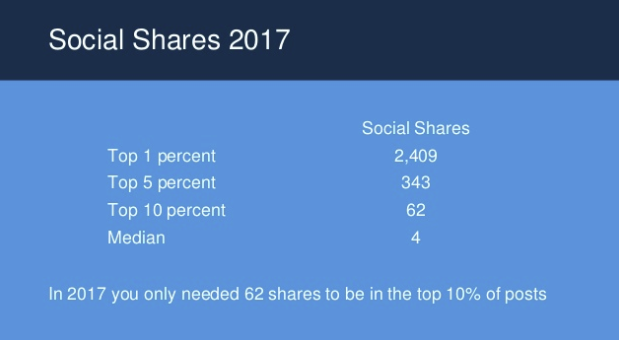 Why is this so? BuzzSumo contends that the factors which have caused the biggest impacts are:

In terms of increased competition, BuzzSumo presents this example – we can see here that as Wordpress posts, overall, have increased, pageviews of those posts are starting to decline. 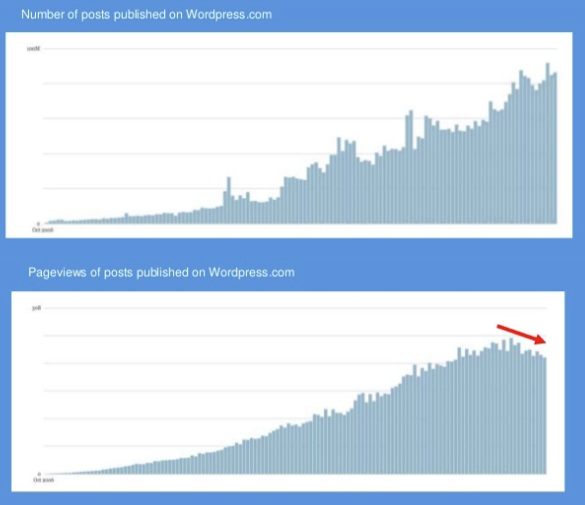 This comes back to the ‘content shock’ theory, that eventually there will be just too much content to consume, and it'll become overwhelming, making it increasingly difficult to succeed. That makes logical sense, but the takeaway from this is not that brands should necessarily be turning away from content, but that simply producing content alone will not be enough.

You need to be investing in your content program, getting great creators to do the work, conducting in-depth research to understand what your audience wants.

The content marketing trend has lead to many businesses jumping on board the bandwagon, trying to keyword stuff their way to success, but at this stage of the game, that simply won't work. If your material isn’t great, isn’t adding something new, isn’t speaking to your target market, you can expect it to be a tough slog to build and maintain an audience.

Dark social shares have also become a more significant factor – with more and more people turning to private messaging, as opposed to broadcasting their thoughts on social, more of your content is likely being shared and discussed outside of your field of digital vision. 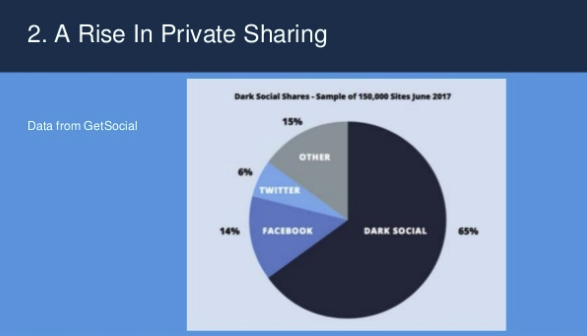 There are workarounds to get an estimate on dark social traffic, but it’s not simple, and given the rise of messaging apps, you can expect the challenge of tracking dark social to increase.

And the last main factor is also only set to become more prevalent – Facebook’s algorithm shifts have already had a significant impact on referral traffic, and that’s likely to be even more pronounced this year, as The Social Network looks to re-focus on person-to-person engagement. 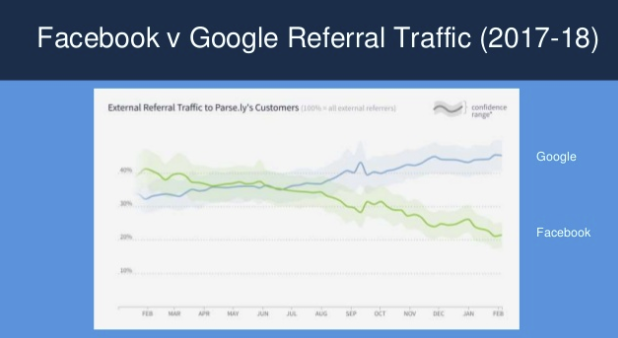 You can see the Facebook shifts at play in this graph from Parse.ly – where Facebook was driving more referral traffic than Google in early 2017, as the months have progressed, that traffic has dropped, putting Google back in the lead.

Facebook’s crackdown on ‘lower quality’ content has also had an impact, with BuzzSumo reporting that ‘clickbait style headlines and listicles are now far less effective at generating social engagement than they were’. This is probably a good thing, as it weeds out some of that competition, but it’s also important to note, as many publishers had switched to these types of tactics to boost engagement.

That’s not to say they won’t work at all – Facebook’s latest News Feed re-alignment puts the focus on content that generates engagement and conversation through comments, and it’s a pretty safe bet that clickbait-style headlines and listicles will still do this. Divisive headlines, in particular, spark debate and back and forth – Facebook says they want to move away from this type of content, but at the same time, if they optimize for engagement, it’ll still be effective. BuzzSumo’s data shows that its now less effective, but hard to see it falling out of style completely.

In terms of lessons for marketers, BuzzSumo outlines the following: 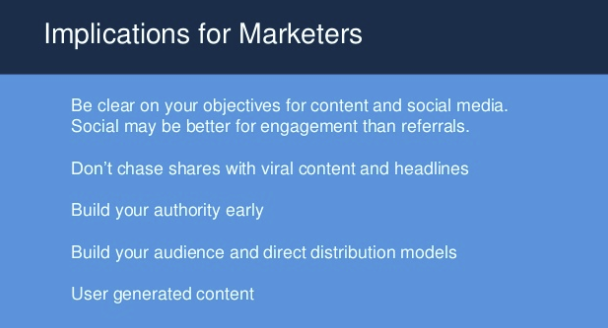 Essentially, brands should look to establish more direct connection with their audience, as opposed to building reliance on social platforms. While social is great for generating engagement and exposure, it’s becoming less of a driver for referral traffic, which means focusing on other options, like SEO and email marketing, remain more stable, reliable options.

It’s a great report, and worth looking through – you can view the full BuzzSumo ‘Content Trends 2018’ report here.