In a surprising turn of events, Elon Musk now looks set to become the sole proprietor of Twitter, after Twitter’s board met on the weekend to vote on accepting his $44b takeover offer.

Initially, it seemed that Twitter would rebuke Musk’s bid, even initiating a ‘poison pill’ mitigation process to stop Musk from acquiring the company through a share buy-up. But according to reports, Twitter’s board ultimately felt that they had little choice but to accept the billionaire’s offer – which means that Elon himself will now be the one setting the rules, and giving the green light on the way forward for the platform.

So what does that mean?

Well, no one knows for sure, likely not even Musk himself, who recently admitted that he’s still working through his plans.

But we do have some pretty clear indicators about Musk’s intentions, ranging from restoring ‘free speech’ to combating bots.

Here’s a look at Musk’s key areas of focus, based on his public statements thus far, and how he might go about tackling each.

Free speech has become the main focus of the Musk-Twitter push, with the Tesla owner publicly decrying Twitter’s past actions in silencing certain users.

What should be done? https://t.co/aPS9ycji37

Musk has also criticized Twitter’s decision to ban former US President Donald Trump, while he’s also had his own share of issues related to his tweeted remarks and statements.

Will Twitter take a different approach to such under Musk’s leadership?

You have to suspect it will - but how, exactly, that will look is anyone’s guess.

Musk’s main contention here is that by taking Twitter into private ownership, that will enable it to be more free in what it allows, as it won’t be beholden to shareholders or advertisers in this respect.

But ads, of course, are Twitter’s key money maker – in looking at Twitter’s Q4 21 results, ad sales made up the vast majority of Twitter’s revenue intake. 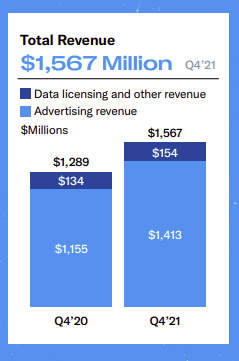 Then again, under private ownership, Twitter won’t be under the same revenue pressures, in terms of increasing revenue and improving performance in line with shareholder expectation. But Elon’s still paying $44 billion for the company. You would assume that he would like to recoup at least some of that expense.

So what would be a profitable revenue target for the platform?

Looking at Twitter’s numbers, it’s still paying some high operating costs, with the company reporting an operating loss of $493 million for FY 2021.

That means that, while Twitter brought in $5.08b in revenue for the year, it actually paid out $5.5b in costs.

Some of these expenses were once-offs (like a ‘one-time litigation-related net charge of $766 million’ due to a shareholder class action), but breaking them down into individual elements, some of Twitter’s key costs for 2021 were:

Taking into account cloud and other infrastructure costs, you’re looking at a baseline operational cost of at least $3b-$4b, so at a bare minimum, Musk will need to generate at least that to avoid it costing him money, and without ads, that’ll be a tough ask.

So how will Musk do it?

I suspect this is the answer:

Musk’s view is that by authenticating real people, and giving them a checkmark, that will lessen the impact of bots (another of his key focus points), and forcing people to pay for Twitter Blue, at $3 per month, could be the way that he does it.

But would people actually pay for Twitter? Does anyone actually need the app that much that it would justify a $3 per month charge?

Right now, very few people are signing up for Twitter Blue, with the lure of a few custom color options and ‘undo tweets’ really not moving the needle for regular users.

But if Musk cut everyone off, unless they paid the fee, maybe that would get more people to actually pay-up - and if a lot of prominent users did end up paying, that would then entice others to sign on, so they don’t miss anything.

At present, Twitter has 217 million daily active users, which, if they each paid $3 per month, would bring in $7.8b in annual revenue for the app. Of course, not all of these users are going to pay, but I suspect also that Twitter is actually a very important tool for those that do use it, even if its user numbers pale in comparison to Facebook or Instagram.

Let’s say only half of these people sign on – that’s still $3.4 billion in annual revenue, without ads, and with Musk also vowing to cut costs, by either getting rid of Twitter’s San Francisco HQ or eliminating salary for board members, there could be ways to make this a workable option.

But it’d be a big risk. If Elon decided to lock every non-paying user out, that could also see conversations move to other, free networks instead, which could leave Twitter with nothing, and reduce his $44 billion investment to zero very fast.

But I do think it could work, and if Musk can also add new features, as he says, to make that $3 monthly investment even better, Twitter could become a hub for more engaged, active and accountable conversation very fast. And as I say, I suspect a lot of media folk, at the least, would be willing to pay to engage in that group chat.

This is the kind of bet that I think Musk will take, and while it could reduce Twitter’s presence in the social media sphere, by lessening its user base, it could still ensure that it remains a relevant, valuable entity, and potentially a profitable one for Musk longer term.

And ultimately, that could also be Musk’s pathway to free speech. With every user registered and accountable, and only paying users able to get into the app, that puts more onus of responsibility onto each contributor, while trolls wouldn’t so easily be able to make new accounts just to attack and harass others.

It would be free speech with accountability - which may not be exactly what free speech advocates have been calling for. But it seems like one of the only viable ways for Musk to achieve some of his key, stated goals here.

Another element of Musk’s Twitter takeover push has been algorithmic transparency, and giving users the opportunity to understand, and even control, how the system decides what’s most relevant to them.

“Any changes to people’s tweets - if they’re emphasised or de-emphasised - that action should be made apparent, so anyone can see that that action has been taken so there’s no sort of behind-the-scenes manipulation, either algorithmically or manually.”

Twitter’s already exploring through its ‘bluesky’ initiative, and the concept that regular users could have a better understanding of such systems does make sense - though the complexities may well be lost on us non-coders and regular folk (i.e. the vast majority of Twitter users) who just want to check out the latest tweets.

A key risk on this front is that by opening up its algorithmic parameters, Twitter would enable users to identify key aspects that they may want to emphasize or not within their experience. Which makes sense for, say, eliminating mentions of ‘The Kardashians’ from your feed, but what if you wanted to eliminate ‘Liberal bias’ or other elements that could contribute to the echo chamber effect?

It could also lead to new qualifiers being built into algorithms that may not deliver pleasant, or even legal results.

TikTok, for example, has faced criticism in the past over its efforts to suppress posts from users with ‘bad teeth’, ‘big bellies’, physical disabilities, and more. The fact that this is even possible suggests that TikTok’s system is able to categorize content based on such parameters, and with those types of options in place, that could lead to some concerning use cases in the app.

It’s not an easy road, and Musk will have his work cut out on this front, but again, Twitter is already moving on this path, and Musk’s impetus will likely see the bluesky project develop a lot faster.

Musk is also keen to eliminate bots, which, as noted above, a new checkmark system for all users could assist with in many ways.

If our twitter bid succeeds, we will defeat the spam bots or die trying!

Twitter’s been working to address its bot problems for years, though the view is that it could do more, with bot accounts seemingly easy to identify for most users.

The question in the past has been whether Twitter actually wants to tackle bots, or whether it’s more beneficial for the platform to continue counting them as ‘active users’. With market pressure on Twitter to boost usage numbers, maybe, by turning a blind eye to some of these bot profiles, that helps to prop up those figures.

It seems like Musk will be pushing for that, and it’s another area that Twitter has been developing, while a shift to increased accountability for all human users will, again, be of benefit here.

These are the three key pillars of Musk’s Twitter push - or at least, the ones that we know of thus far, and it does seem like these will be the focal points of his platform leadership when he takes over at the helm of the app.

Which could be soon, and while the deal is still subject to various approvals and processes, it does seem that we’ll find out very quickly what Musk’s plans are for the app.