After being spotted in testing earlier this year, Facebook has this week officially launched its new activity dashboards in both Facebook and Instagram, which will help users maintain awareness of the time they’re spending in each app, and could reduce the amount of mindless scrolling. 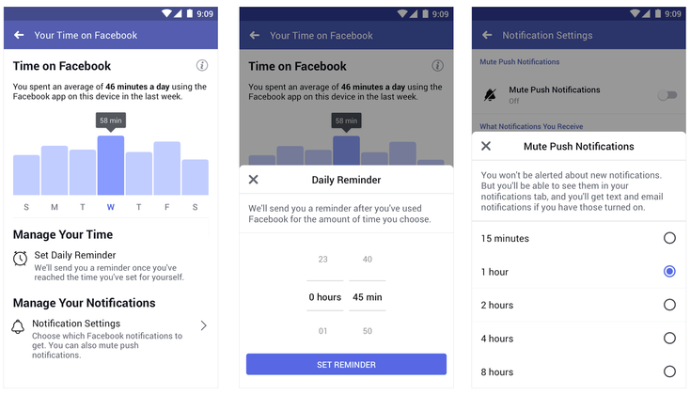 “We want the time people spend on Facebook and Instagram to be intentional, positive and inspiring. Our hope is that these tools give people more control over the time they spend on our platforms and also foster conversations between parents and teens about the online habits that are right for them.”

“On Instagram tap “Your Activity,” and on Facebook, tap “Your Time on Facebook.” At the top, you’ll see a dashboard showing your average time for that app on that device. Tap any bar to see your total time for that day. Below the dashboard, you can set a daily reminder to give yourself an alert when you’ve reached the amount of time you want to spend on that app for that day. You can change or cancel the reminder at any time. You can also tap on “Notification Settings” to quickly access the new “Mute Push Notifications” setting. This will limit your Facebook or Instagram notifications for a period of time when you need to focus.”

Both tools were first reported by TechCrunch when seen in testing. 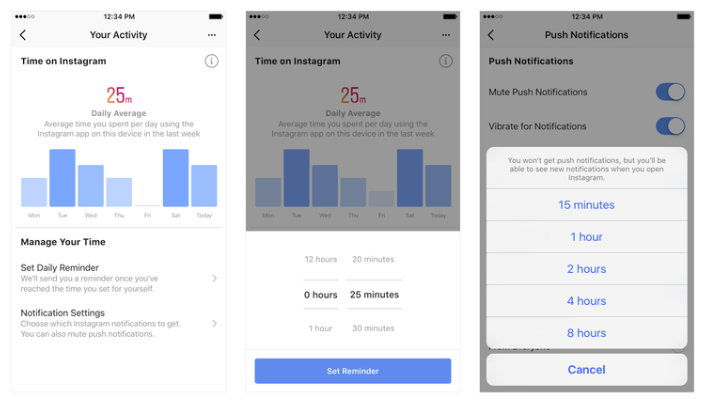 While the stats may be scary for some, it is important for users to see - as social media has become more entrenched into how we interact and spend our time, the societal benefits of the medium have often come into question. With your smartphone always at the ready, always there to fill any gaps in time, any gaps in conversation, it’s easy to fall into rabbit holes of content, and that’s not always beneficial, for your communicative capacity or for your mental health.

Indeed, the impetus for the new dashboards was a Facebook commissioned report which found that when people spend a lot of time passively consuming information on social media (reading posts but not interacting with people), they generally report feeling worse afterward. Conversely, actively engaging with people on social (sharing messages, posts and comments with close friends) has been linked to an improved sense of well-being, showing that social can provide connective benefit – so long as it’s used in a mindful way.

The findings have since become a key focus for The Social Network - during the company’s fourth quarter earnings call earlier this year, Facebook CEO Mark Zuckerberg noted that:

That newfound emphasis lead to Facebook’s News Feed re-focus, announced back in January, which aimed to amplify person-to-person interactions, prioritizing them over person-to-Page actions. The activity dashboards further add to this, focusing on community health impacts – and also worth noting, both Apple and Google are looking to add their own time spent measurements to iOS and Android respectively, reinforcing the new ‘time well spent’ movement.

Now we wait to see what the broader impact of these tools will be. As noted, Facebook has already warned that such measures could reduce their activity metrics, which may make it harder for the platform to maximize its revenue opportunities. But then again, for such tools to be effective, users have to actually look at them – and the majority, as the usage of previous tools would suggest, simply won’t.

Will you look at your metrics, or will you trust your own judgment? Do you even want to know how much time you’re spending in app?

Given this, it wouldn’t be surprising if, at some stage, Facebook introduced new automatic notifications which alert all users who exceed a certain amount of time spent in-app. Adults should have the responsibility to manage their own time, but it would make sense for Facebook to add in alerts to let them know how much time they’re spending, after a certain threshold, in order to reinforce these measures.

Facebook does note that these the dashboards are “an important first step”, so you can expect more on this front in future.

It’s a positive move from Facebook, and a good sign of things to come on this front.