Facebook is updating its group settings to stop any Facebook Group, of any size, from changing its settings from 'private' to 'public', in order to protect group users from unintended exposure. 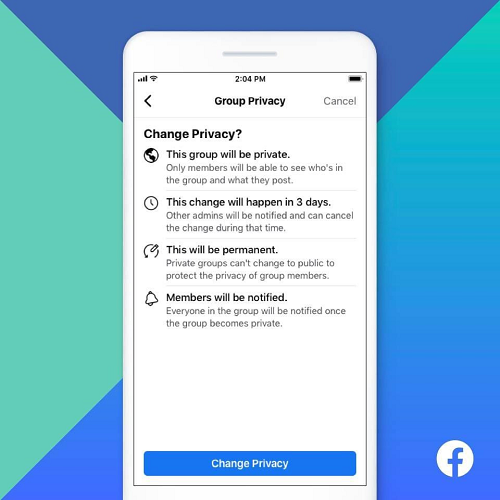 As shared by social media expert Matt Navarra, the new setting will ensure uniformity across all Facebook group types - up till now, Facebook has allowed groups with fewer than 5,000 members to switch their privacy setting once every 28 days, but the new change will mean that once a group is switched to 'private', there'll be no going back.

That, logically, makes sense. While Facebook groups do adhere to personal privacy settings, it can be disconcerting for members to join a private group, only to have it go public.

Facebook says that, in the coming weeks, if an admin does choose to change a group from 'public' to 'private', they'll have 72 hours to reverse the move, otherwise, it'll stick.

As noted in the above image, the main impetus here is to protect group member privacy, but it could also be a measure to stop meme groups from baiting new members by switching between public and private.

Back in March, Instagram chief Adam Mosseri commented on the practice of meme pages on that platform going private in order to gain more followers.

As noted by Mosseri:

"[We've seen] a subset of large accounts, meme pages and otherwise, go private essentially as a growth hack, [which has] risen to the level of concern that we're trying to figure out how to adjust it."

Switching to private means that when people share that profile's content, their friends can't actually view it unless they also follow said account. That can help pages boost their follower numbers through artificially stimulated means.

That, of course, is on Instagram, not through Facebook groups, but the same practice could be extended to Facebook groups also, with groups that are gaining momentum switching to private in order to lure more members.

That's likely not the main focus of this change, given it would only apply to groups under 5k members anyway. But maybe, Facebook is also looking to cut out potential growth hacks of this kind, and by switching to a uniform, 'no going back' approach, it can stop any potential misuse.

Overall, it seems like a fairly logical, straight-forward approach to group privacy settings. If you want a private group, you select 'Private', and once you have, you need to stick with it.

The new changes will reportedly be implemented 'in the coming weeks'.