With video still a main focus for Facebook’s future growth, and live content proving increasingly popular, Facebook’s looking to provide more ways for publishers to utilize Live, which would give Facebook more content to expand their video viewership, and give publishers more ways to connect with their audience.

And worth noting – Facebook specifically mentioned Facebook Live as a key way to maximize reach on the platform in their announcement of their News Feed re-focus earlier this year. If you’re seeing declines or organic reach, or you’re looking to offset potential traffic losses, Facebook Live may be a key option to consider.

First off, Facebook has announced the ability to use a persistent stream key with an encoder when going live on the platform.

“This means if you're a publisher or creator that goes live regularly, you now only need to send one stream key to production teams, and because a Page's stream key is permanent, it can be sent in advance of a shoot, making it easier to collaborate across teams and locations for live productions. Broadcasters can also save time by using the same stream key every time they start a new Live video.”

It’s a technical update, but it will save a lot of time for broadcasters utilizing the Live API, simplifying the set-up process - rather than having to re-enter new details each and every time you broadcast, the persistent key works like a site remembering your password, cutting down process time.

Facebook’s also giving publishers the ability to cross-post their Facebook Live broadcasts across multiple Pages at once, expanding content reach. 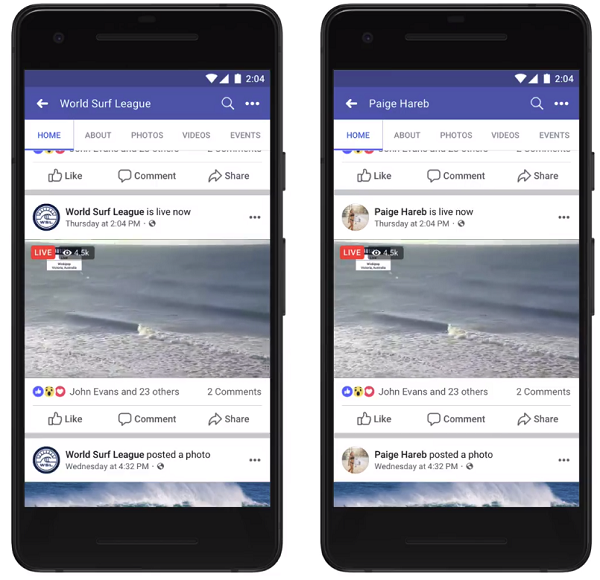 According to Felipe Marcondes, social media manager of The World Surf League, who’s had access to the option in testing, the capacity to post to multiple Pages at once has had a significant impact on reach.

“We cross-posted this recent Live video to our main page, a sponsor's page, and one of our athlete's pages, and the results were great, with more than 1.5M views, 4,500 Shares and over 538K minutes watched.”

And the final update announced by Facebook is the ability to rewind Live videos while they’re live.

“We've heard from viewers that they want be able to re-watch incredible moments or catch-up on ones they missed - like a big play in a sports game or a crucial moment during a show - without losing out on the Live experience.”

Indeed, Live rewind has been one of the most requested features, with users already able to do so on YouTube live-streams. Adding the capacity makes sense for Facebook, and will boost the utility of Live, providing new ways for viewers to interact and experience such content.

As noted, despite some of the hype dying down around live-streaming, Facebook Live has remained a popular option, with over 3.5 billion Facebook Live broadcasts facilitated over the past two years. Facebook Live content also generates 6x more interactions than regular video, while broadcasts from verified publisher Pages have also increased 1.5X in the last 12 months. That last stat’s not overly, given the engagement levels, but it does underline the growing demand, and potential, which Facebook is looking to build upon with these new additions.