Super Bowl LIV is coming up this weekend, and both Facebook and Snapchat have launched some new visual features to help users get involved in the action and show their support.

First off, on Facebook - The Social Network is adding a new set of Messenger camera filters and stickers which have been designed in partnership with the NFL, including its 'Endzone filter' for your Messenger videos and Stories.

"With the Endzone filter, you’ll be able to picture yourself as a wide receiver from the Niners or the Chiefs catching the game-winning Hail Mary to get your team the Lombardi Trophy. And with the Fan filter, you’ll feel like you’re at Hard Rock Stadium in Miami celebrating your team’s triumph."

The filters and stickers will be available for a limited time, and only to users in the US, UK, Brazil, Canada, Germany and Mexico.

Over on Snapchat, Snap's added a range of Super Bowl features, including a Marker Lens to celebrate the NFL’s 100th season:

Snapchat's also added an image-recognition based Lens, which provides related content based on the NFL images you scan: 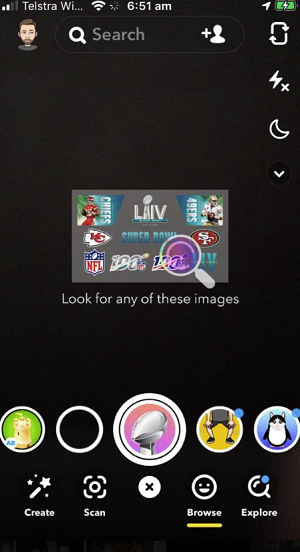 Snapchat's looking to add more image-recognition based tools, including ads, and this new NFL Lens is another way for Snap to showcase its evolving capacity in this respect.

In addition to this, Snapchat will host NFL-partnered content on its Discover page, which will feature previews, game highlights, and more, all updated in "near real-time" on Super Bowl Sunday.

On Twitter, Super Bowl-themed tweets using the hashtag #SBLIV will have a 'hashflag' automatically attached, as has become the norm for major sporting events on the platform: 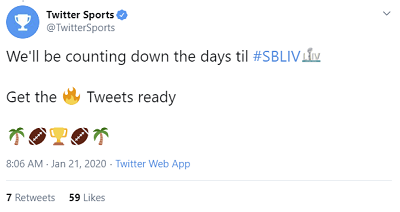 Instagram hasn't announced any official themed updates as yet.

Even so, as the excitement around Super Bowl LIV builds, there's a range of ways for fans to participate on social.