Facebook Enables More Users to Switch Off Political Ads, Expanding the Option to More Than 90 Regions

Facebook's taking another step to reduce political content in user feeds by expanding access to its controls to switch off political promotions in your Ad Preferences.

In June last year, amid its planning for the upcoming US election, Facebook announced that users in the US would be able to turn off all social issue, electoral or political ads, in order to avoid the expected onslaught of campaign messaging in the feed. 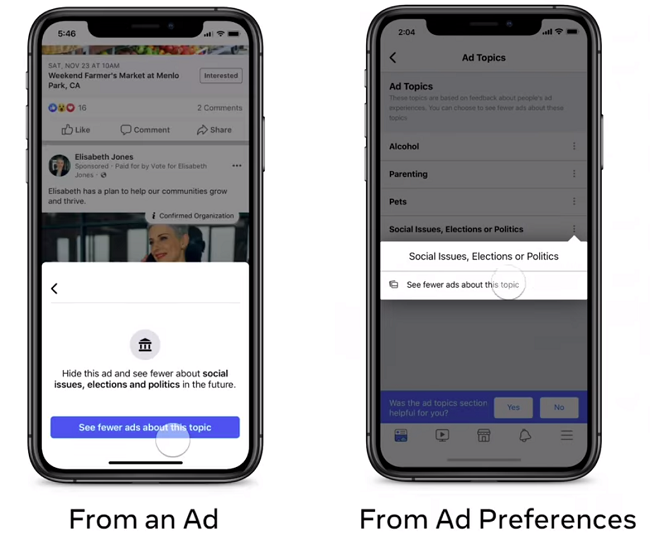 As you can see, these prompts don't say you can switch off these promotions entirely, but you can opt to 'see fewer of them', which, according to Facebook, largely eliminates political ads from your feed.

And now, almost four months out from the divisive presidential poll, Facebook has announced that these same controls will be made available to users around with world, giving more people more capacity to distance themselves from political content in their News Feeds.

"Starting today, the control that allows people to see fewer social issue, electoral and political ads is now available in more than 90 countries where advertisers are required to get authorized and add “Paid for by” disclaimers to run these ads on our platform. People have told us they want the option to see fewer political ads on Facebook and Instagram, so now more people around the world can make that choice."

This comes after Facebook also recently announced that it's looking to reduce political content overall in people's feeds, in response to rising user feedback.

"One common piece of feedback we hear is that people don’t want political content to take over their News Feed. Over the next few months, we’ll work to better understand peoples’ varied preferences for political content and test a number of approaches based on those insights."

Clearly, the backlash here is real, which could see a significant shift at The Social Network. And that could be good for societal engagement more broadly.

Of course, it's difficult to gauge the full impacts of political content on Facebook, and its positive or negative impacts. That's actually why Facebook's recent news ban in Australia was so interesting - while Facebook only held its news ban in place for a week, the move could have provided an interesting case study into what happens to Facebook if news content is no longer available.

Do people use the platform less? Do they engage with friends and family more? Does the removal of news make Facebook a better place to interact?

On balance, it's not that simple. While, as an experiment, the Facebook news ban looked interesting, many publishers also lost huge amounts of referral traffic as a result of Facebook's decision to cut them off, so it's obviously better for them to have the platform back. But still, I'd love to see Facebook's internal usage stats for those few days that news wasn't available in AUS, and to get an idea of what it actually meant for the platform.

Or maybe it won't. People have to opt-in to this, which likely means that most won't bother, while there's no guarantee that removing political content from feeds will actually improve the experience. But Facebook clearly sees merit in the concept - and hopefully we can get some data from The Social Network as to how these tests and tools are working, and what will mean for Facebook moving forward.

And from a marketing perspective, less political content means less competition for both ads and organic posts. That could be a positive for your promotional efforts.