Facebook has announced new age restrictions on ads related to weapons on its platform, in order ensure that such content is not shown to people under eighteen.

Well they do, but these new regulations take their measures a step further.

“We already prohibit ads for weapon sales and modifications like magazines. However, advertisers have been able to promote other weapons accessories, including products that are mounted on guns for the purposes of illuminating, magnifying or focusing in on (e.g. optics, flashlights) a target as well as holsters and belt accessories. Starting June 21, advertisers promoting weapon accessories must restrict their audience to at least 18 years of age and over.”

The new regulations will ensure that such content can only be marketed to adults - part of Facebook’s effort to limit its contribution to the promotion of such goods. 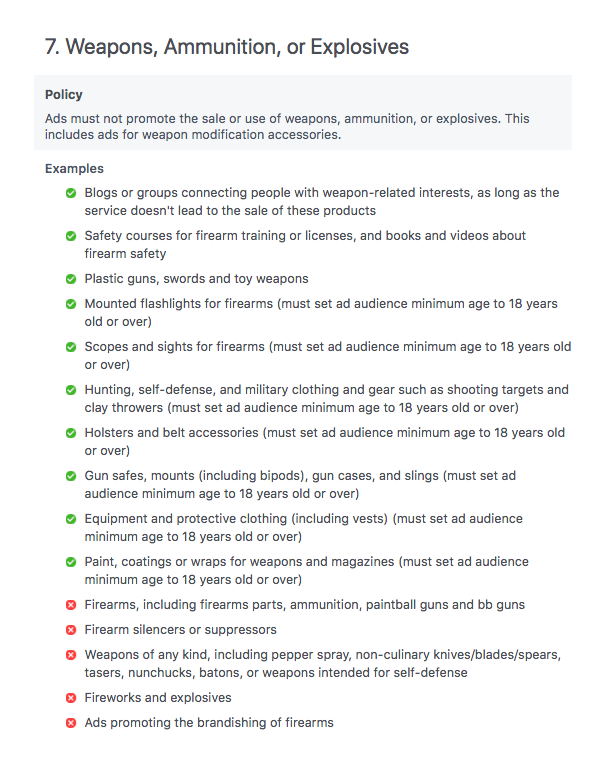 As noted, it’s a fairly logical move from Facebook, and one that should have limited impact, but if you’re advertising in this area, you’ll need to take note of the new restrictions.

On one hand, you could argue that if people under eighteen are allowed to purchase such goods then you should be able to target them with ads, but Facebook’s move is in line with the company’s broader stance against the sales of such items to younger audiences. In that sense, Facebook can choose to regulate how they like, and as noted, most would agree that this policy is both logical and ethical, in most respects.

Facebook’s new regulations on weapon accessory ads are in effect now – Facebook says it will be working with businesses and organizations who may be affected by the policy over the coming weeks to ensure that they know about them and can make the appropriate changes.