According to xmasclock.com, it is now 95 days till Christmas 2019. Yes, we're down to double digits - which means if you don't have your holiday campaigns mapped out, it's probably time to start giving them some thought to ensure that you meet your target customers at the exact right point of their shopping journey.

And these new options may help. Ahead of the coming holiday rush, Facebook has this week announced the expansion of its interactive ad options, including playable games, and AR tools which let you 'try on' make-up.

As you can see here, video poll ads already grab attention through movement, but users can then also interact with them, and when they do, they're shown additional information about the brand and/or product.

Polls also prompt further sharing, with users tagging others to check out the results, or participate themselves.

"Following the adoption of poll sticker for Instagram Stories ads that rolled out earlier this year, we are now bringing video poll ads to Facebook mobile Feed, globally available this month. In our early findings, we’re seeing poll ads in Feed drive increased brand awareness and conversions. For example, in 5 out of 9 brand lift studies, we observed poll ads increased brand awareness compared to video ads."

It's definitely an interesting option, adding another element to your video promotions.

Facebook's also expanding its AR ad tools, which its been testing with selected make-up brands in the US.

Facebook says that the above test, conducted in conjunction with WeMakeUp, drove a 27.6 point lift in purchases, with the average person spending 38 seconds interacting with the ad unit. Given this early success, Facebook's now planning to open these ad tools up to more advertisers via its beta program this fall.

"For businesses, the augmented reality opportunity is clear: in the US, 63% of internet users surveyed say they’ve tried an AR experience created by a brand."

Definitely, tools like this are proving valuable. YouTube recently expanded its own variation of the same, with its 'Beauty Try-On' AR ads, while AR tools are becoming increasingly popular through the various Stories options.

What will be particularly interesting to see is whether these tools expand beyond make-up, and are incorporated into other ad campaigns to help showcase what different variations or products would look like in real life.

And finally, Facebook's also expanding its playable ad format, which enables Facebook users to play a game in order to drive downloads, conversations and other brand objectives. 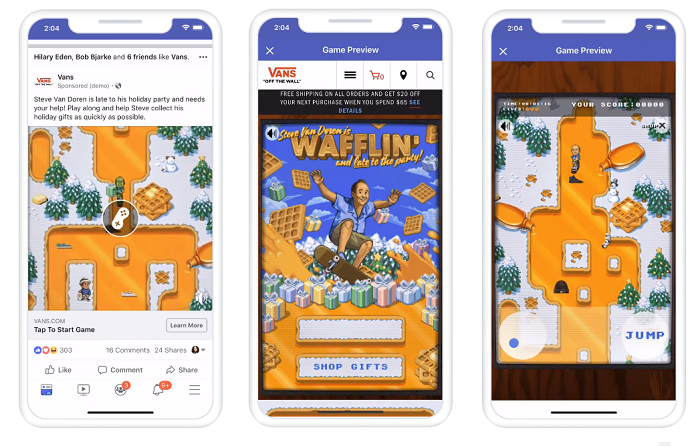 In the above example from streetwear company Vans, users are able to guide Vans legend Steve Van Doren down a mountain, collecting gifts along the way. As you can see, the option also includes direct links to the types of products features within the game, helping to promote Vans' offerings - and you can imagine that this could be great for seasonal game tie-ins.

Interactive tools like these can be a great way to maximize campaign performance, and are definitely worth considering, either for current or future campaigns.

For many, the full development of the latter two options (AR try on and games) is likely out of reach, but it is still worth considering where interactive tools like this might fit when mapping out future strategies.