Facebook Is Testing Longer-Lasting Stories, With an Option to Keep Stories Active for 3 Days

With the Stories format slowly gaining traction on Facebook, The Social Network looks to be experimenting with a new option that could increase Stories views - and potentially make them a more interesting proposition for the older Facebook audience.

According to a new discovery by reverse engineering expert Jane Manchun Wong, Facebook is testing a new option that would enable users to keep their Facebook Stories active for up to three days, as opposed to the current 24-hour expiry. 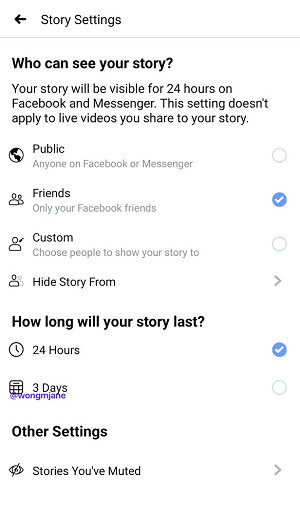 That's a significant jump, which also somewhat changes the core concept of the format - but as noted, maybe it will appeal to Facebook's audience, which is older, on average, than other platforms, and therefore less familiar with the Stories process.

That's really the key to Facebook seeing increased Stories use. It's been trying for years to push Facebook Stories, in the hopes that it will gain traction the way that it has on Instagram, but thus far those efforts have largely fallen short of expectation. Sure, 500 million Facebook users now engage with Stories every day, but with 1.66 billion total daily actives in the app, that's, comparatively, not that much (for measure, half of Instagram's billion users engage with Instagram Stories daily).

The Stories format in general, however, is growing, and Facebook sees it as the future of social sharing. The Social Network has repeatedly noted that Stories are on track to overtake posts in the news feed as the most common way that people share across all social apps (if they haven't already), and given this, Facebook is keen to migrate more users across to Stories to better position itself for the next shift.

That, in Facebook's case, means getting older users accustomed to, and interested in, posting Stories, which they haven't shown any significant leaning for at this stage. But maybe, if Stories lasted longer, that would be more appealing - maybe if their Stories were available at the top of the feed for longer, and therefore more of their friends engaged with them, that would inspire more older users to adopt the process.

As noted, it does seem to go against the ethos that Stories was founded upon, and gained traction around. But if it works, and if Facebook can pull a few more users in, and boost those engagement stats. It makes sense that they'd at least try it.

From a marketing perspective, it seems like a risky proposition, potentially pushing too hard by leaving your promotional messages littered atop your followers' feeds for three days at a time. But maybe it could provide more opportunity for limited time offers - maybe you could post a special deal for your followers that has to be redeemed within three days, by showing a specific Stories frame in store.

Facebook hasn't provided any info on the test, but going on Wong's past discoveries, I'd give it a month before we hear official word on this.