As the COVID-19 vaccine roll-out continues to gain momentum, Facebook is looking to use its reach to promote vaccine information to the most impacted communities, with a specific focus on those that may have limited exposure to vaccine info.

First off, Facebook is donating $5 million to Go Give One, a COVID-19 fundraising campaign created by the World Health Organization Foundation.

"The campaign calls on everyone to play their part in helping to vaccinate the world, with the money raised going to an international fund called COVAX (COVID-19 Vaccines Global Access). We’ll do this by donating the first $20 into Facebook Fundraisers created for the United Nations Foundation beginning April 28 in the United States, United Kingdom, Germany and Norway." 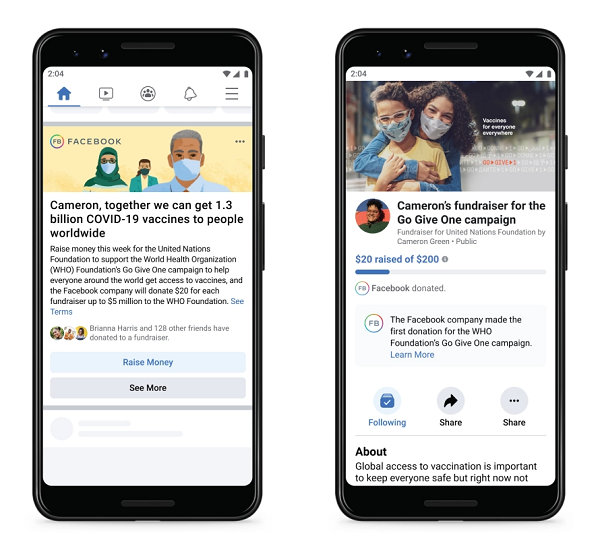 Facebook is also looking to expand its vaccine messaging by using the CDC’s Social Vulnerability Index to identify the communities most likely to need additional support in their vaccine awareness and take-up efforts. Based on this, Facebook will highlight more vaccine and health information in the News Feeds of users within these communities.

Facebook's also looking to help boost awareness content from partners that are working to help reach people most affected by COVID-19.

"In the US, we’re working with partners like KFF (Kaiser Family Foundation), BlackDoctor.org and the National Academy of Medicine to amplify content that features black doctors, nurses and researchers answering common questions about COVID-19 vaccines. And we’re supporting AARP and Johns Hopkins University’s Bloomberg School of Public Health to run Spanish-language campaigns about COVID-19 vaccines. We’re also partnering with Black-owned social enterprise Broccoli City to host a series of conversations on Facebook between Black influencers, doctors and scientists on vaccine equity and the overall impact of COVID-19."

These are the latest measures in Facebook's ongoing vaccine awareness and promotion efforts, which also includes in-app prompts to increase awareness of local vaccine roll-outs, vaccine profile frames and stickers, on both Facebook and Instagram, to share participation with your connections, and updated rules around sharing vaccine misinformation and myths.

In combination, and aligned with Facebook's massive audience, these efforts could have a big impact in increasing take-up, with the local awareness efforts alone likely seeing broader reach than any other media outlet.

Facebook has been widely criticized for the role that it's played in amplifying the spread of dangerous movements, like anti-vaxxers, in the past, but it should also get some credit for its work to boost the broader push here - which could also signify a re-think within the platform in respect to its approach to similar concerns moving forward.

Or maybe that's wishful thinking - but you would have to assume that now, with the COVID-19 vaccine push in full swing, and in the wake of the Capitol Riots. After all this, Facebook must be assessing the impacts its platform can have on such moving forward.