It seems that Facebook’s still looking for ways to address its ‘context collapse’, the decline in personal sharing on the platform which has been in effect over the last few years.

Back in 2016, The Information published a report which suggested that overall sharing on Facebook had fallen 5.5% between mid-2014 and mid-2015, with sharing of personal posts - people's own thoughts and photos - falling 21% during that period. That was, reportedly, enough to have inspired Facebook to put together a team to tackle what they’d called ‘context collapse’, with Chief Executive Mark Zuckerberg calling on staff to come up with new ways to inspire more personal sharing.

Since then, you may have noticed an increase in prompts to get you talking about your life and experiences – there are more 'On This Day' reminders and notes about seasonal events, little nudges to get you thinking about staying in touch with your connections.

The push to get users sharing more about themselves makes sense, as that’s the data Facebook uses to fuel its all-powerful ad platform, while personal sharing also boosts engagement and keeps people on platform for longer. No doubt this is also why Facebook’s been experimenting with a new version of the News Feed which splits Page content and updates from connections into two separate listings.

Clearly, Facebook wants to promote more personal interaction, which is the impetus behind their latest test. 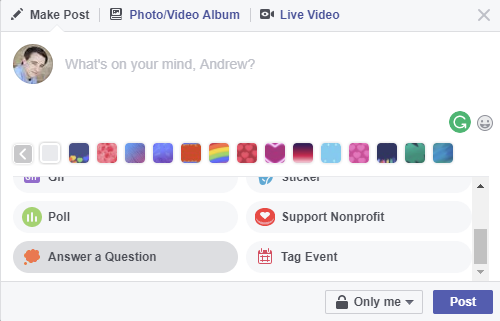 Now, you can also choose the ‘Answer a question’.

What question can you answer? There’s a whole range of them – click on the button and a random question will be generated for you. 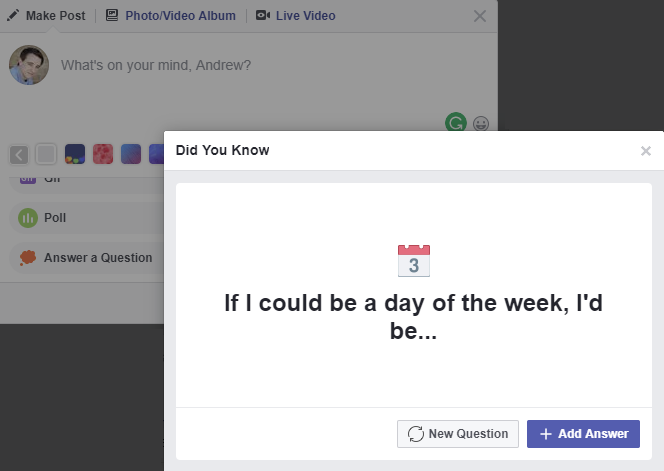 There’s a range of queries you can respond to – click or tap on the ‘New Question’ button and you can scroll through to find one you like. 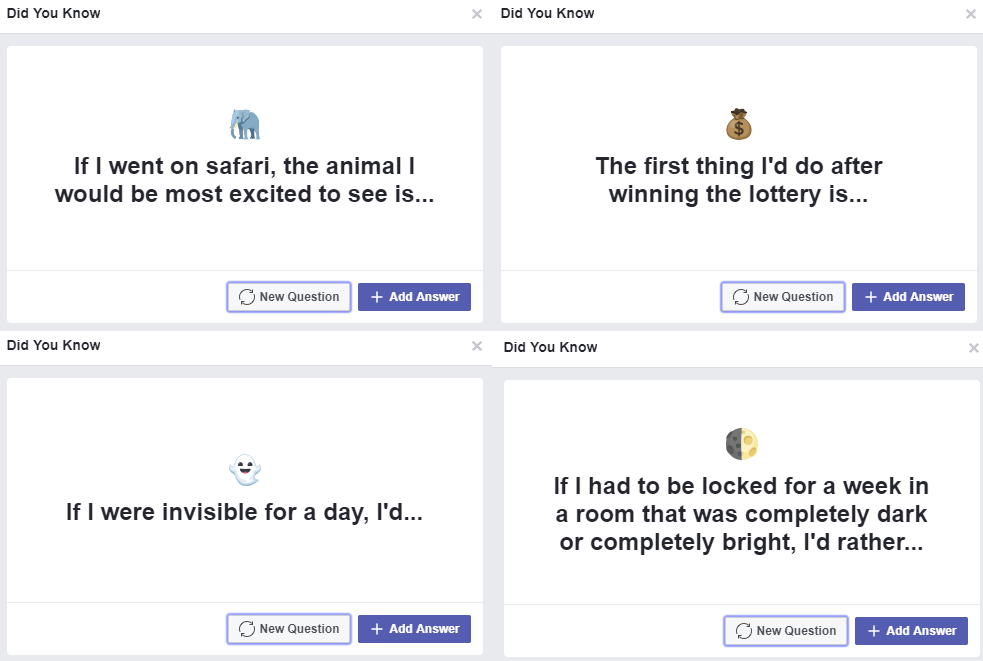 Once you’ve chosen a question you want to answer, tap on the ‘Add answer’ button and you’ll be presented with a new post layout, with the question up top, and one of Facebook’s colorful backgrounds (which you can choose). 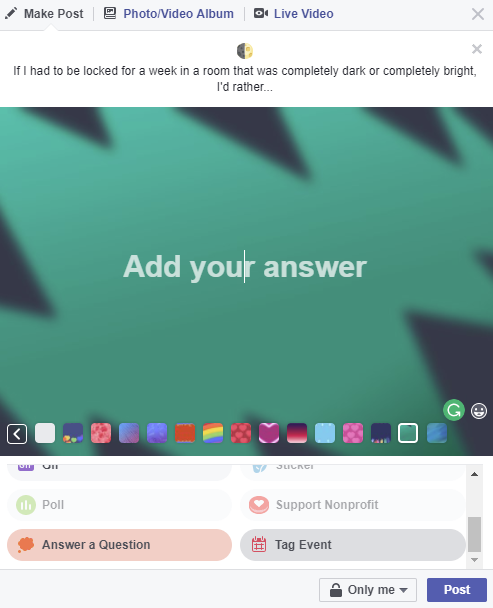 Post your update, your connections see your response, and, in theory, they respond to it, sparking more personal interaction.

It seems a bit forced, doesn’t it? Like Facebook’s trying anything they can to keep you engaged. But at the same time, it is likely to help inspire more conversation, especially as we move into the holiday period (where people might be looking for distraction). Facebook hasn’t made a big announcement of the new option, but it is rolling out across all devices this week.

Clearly, Facebook’s data has shown that getting people to share more of their personal insights, via questions, can drive engagement. You can also follow a similar process on personal profiles, with an option enabling you to post an answer to a question about yourself to help visitors get to know you better. 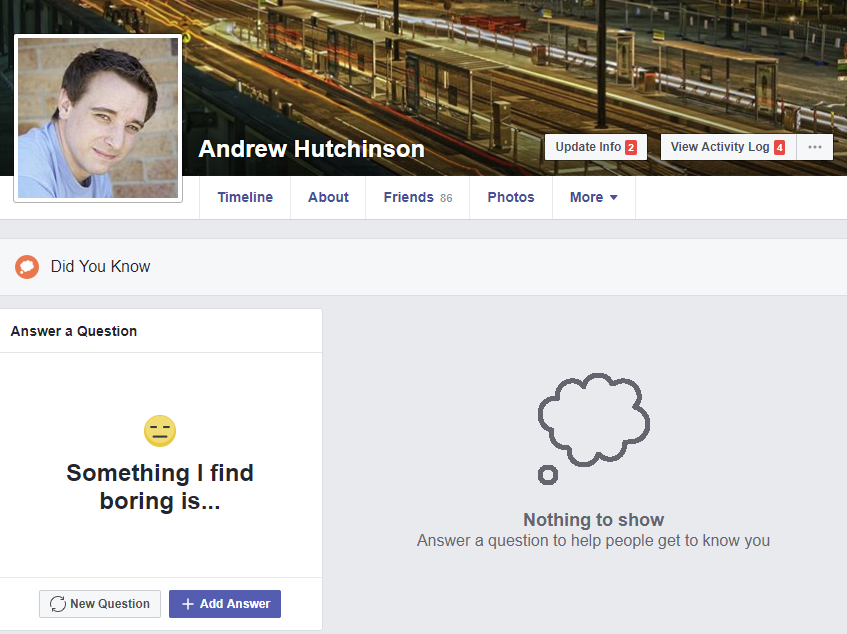 And on another front, they're also testing out new emoticon-style interaction options, another way to boost responses

Facebook has got a bunch of new Reaction buttons for ‘Greetings’ pic.twitter.com/FMiH7e0m5B

As noted, it may seem a little forced, but you can also imagine that people would find such responses at least moderately interesting. And if it were a close friend or relative, you might be inclined to respond.

But while Facebook’s looking to boost personal sharing, it’s also worth considering where that type of sharing is going to. More people are spending more time online than ever, there’s no decline in activity. So why are people sharing less to Facebook?

This graph likely tells the story:

Over time, as Facebook has grown, so too have concerns about recording all of our day-to-day experiences for everyone to see. The interactive element is great, as is staying connected with friends and family, but we’ve gradually learned that we still need to maintain a level of privacy, to speak without risk of causing offense or saying things that might come back to haunt us.

In this sense, social media, in a broader sense, is moving away from public broadcasting and into private spaces.

And as noted by Mark Shaefer, that could have significant implications for marketers – particularly those who can master messaging platforms:

“The typical open rate for email is about 20%. Without the boost of ad support on Facebook, your organic reach for your content probably averages less than 1% (this can vary widely by business). The open rate for a private message? 98%. Smartphone users are more likely to have push notifications turned on for a messaging app than for email, a branded app, or even Facebook.”

It’s challenging for brands to insert themselves into these more private conversations, but it’s where, increasingly, the focus should probably shift.

The immediate possibility that springs to mind is Chatbots and tools that can better facilitate connection, while also reducing labor time. While Chatbots haven’t taken off as some had expected just yet, there's still a lot of potential in the option, and it’s likely to become even more significant in the coming year.

But even if Bots don’t gain significant traction, it's interesting to consider the wider trends behind the latest social shifts, and Facebook’s larger push to get people interacting.

But really, Facebook will probably win out either way. Facebook itself has more than 2 billion users, but the company also owns Messenger (1.3b) and WhatsApp (1.3b), the two largest messaging platforms, which also means they have that additional data to lean on.

It’s in Facebook’s interests to keep you engaged and locked into their main app, but they have alternatives to cover various use cases, and will no doubt continue to acquire new platforms as trends evolve.

Thanks to Matt Navarra and Akram Alodini for tips on this update. 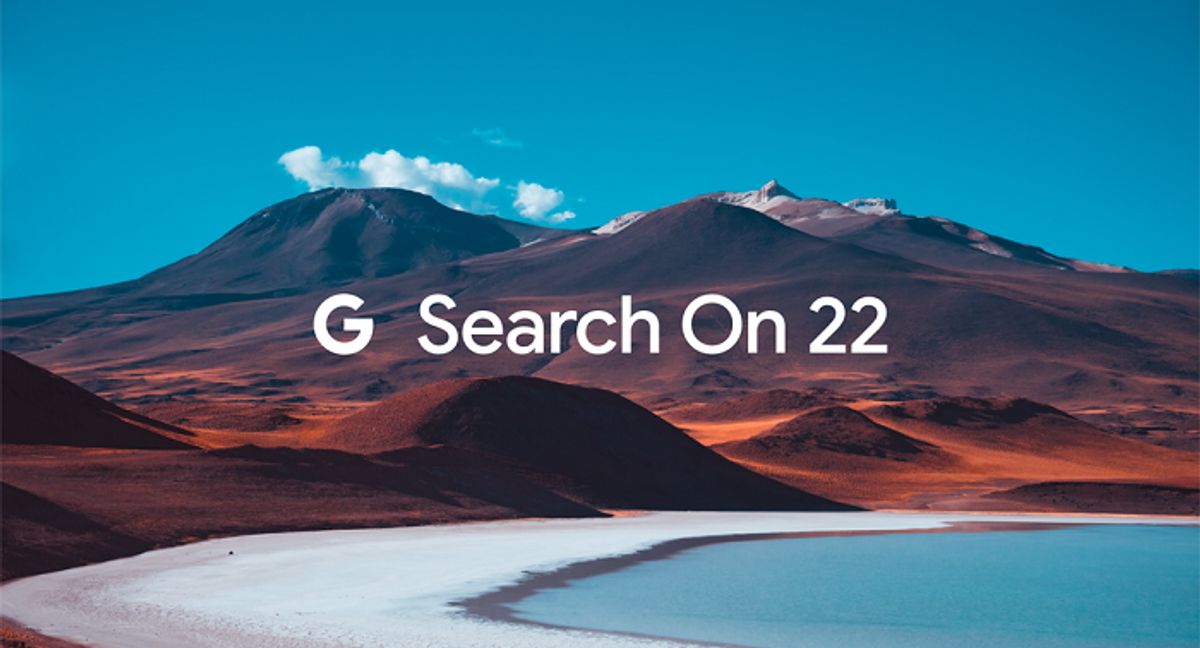 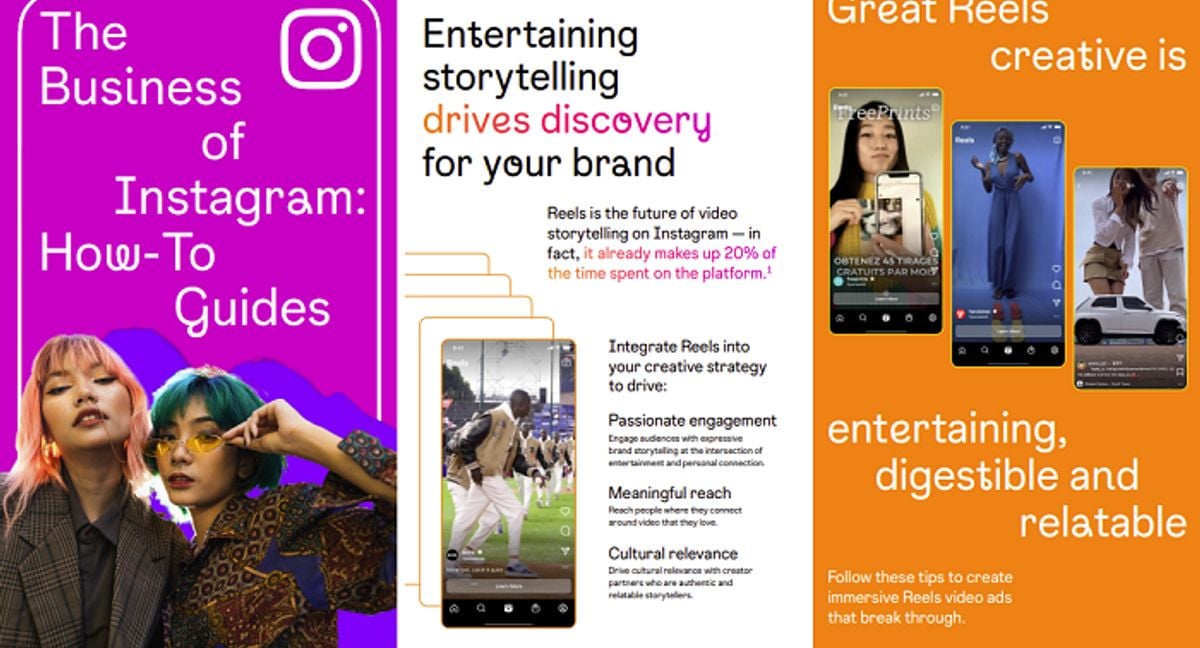 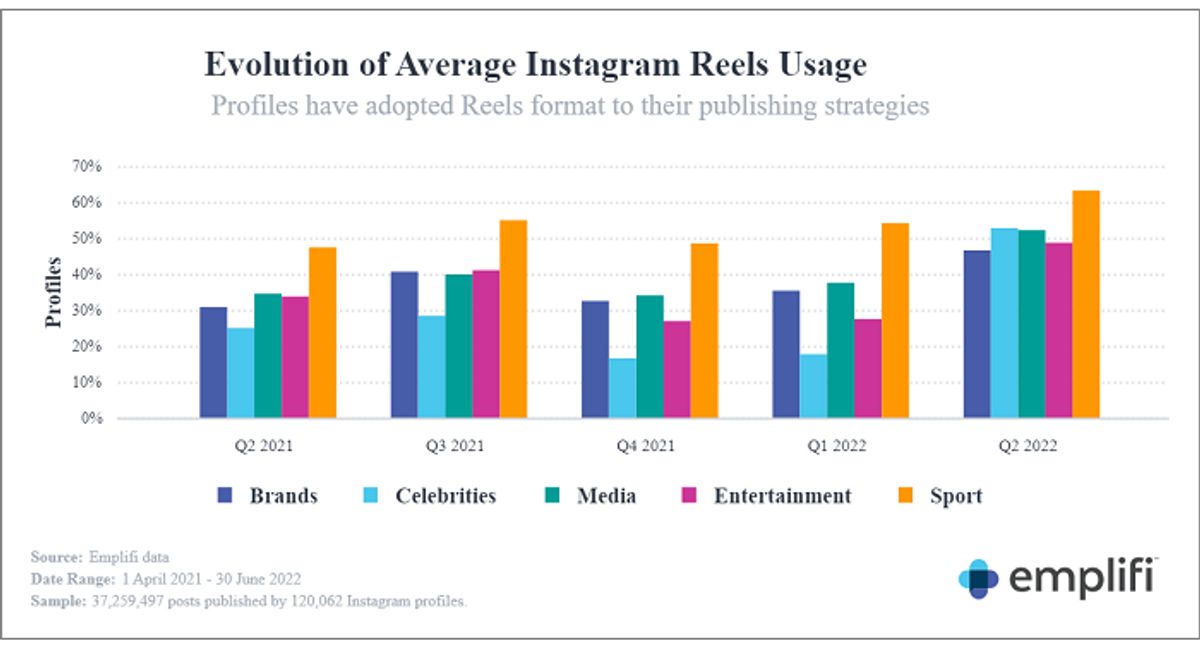 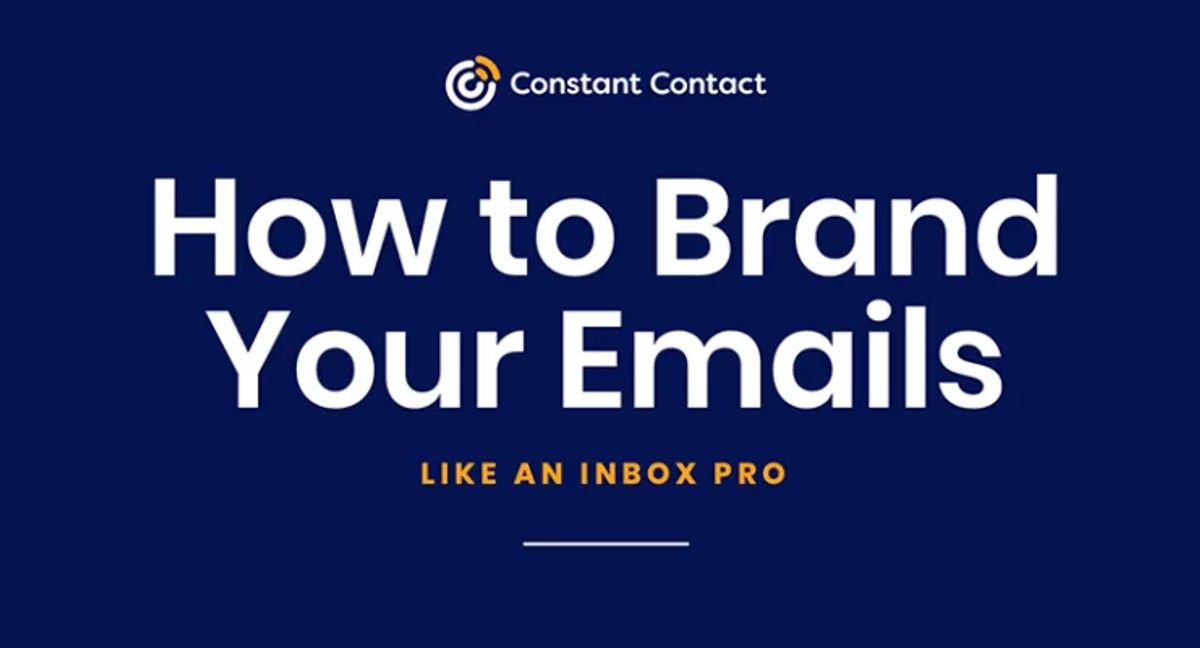