The data, which Facebook has been tracking since July, incorporates responses from more than 30,000 small business owners across 50 countries, and highlights the key concerns and challenges they face as each seeks to maintain operations. The insight here is valuable for virtually every organization, as the flow-on effects from SMBs will relate to spending in almost all aspects of the economy, and will influence market spend and focus moving forward.

"Impacts on SMBs can have wider ramifications for the macroeconomy: on average, SMBs account for 75% of employment in sectors directly affected by lockdown measures across OECD member countries."

That makes this an essential, influential consideration.

You can download the full, Global State of Small Business Wave VI update here, but in this post, we'll look at some of the key data points and charts.

First off, Facebook's report shows that SMB closure rates have continued to fall, which means that fewer business have been forced to shut due to the pandemic within the most recent period. 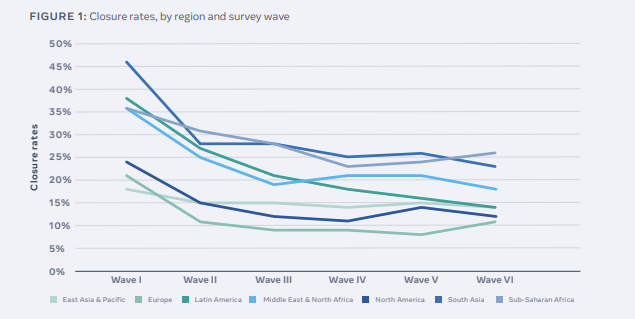 But as you can see, that's not true for every region. Closures in Sub-Suharan Africa have increased again, as have some regions in Europe. Facebook notes that there have been significant impacts in Israel and the Czech Republic, specifically, as both regions have been forced back into strict lockdowns. Many European nations are also now in the midst of re-instituted lockdown measures as a result of overloaded healthcare systems, which will likely see ongoing impacts in the next update.

That, hopefully, won't see a significant increase in closures, as end of year sales could help offset some losses. But in this reporting period, around half of all businesses have reported that they're still seeing a significant decrease in sales activity. 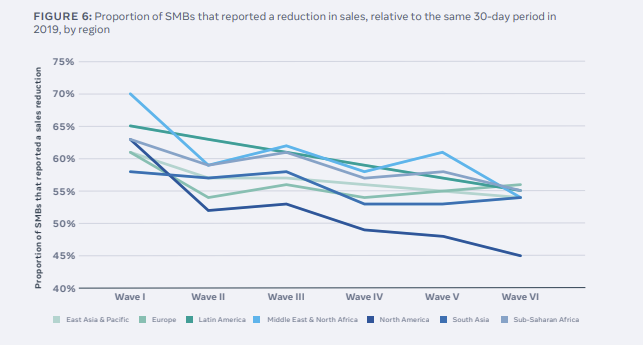 As you can see here, the situation is improving, but millions of businesses, even if they can open, are not seeing the same sales volume as they were last year.

Facebook does, however, note that the amount of loss is reducing 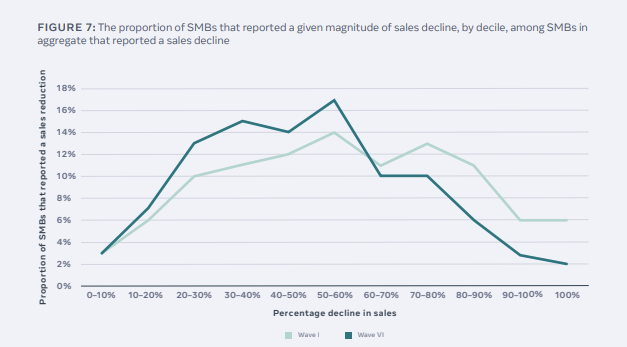 "In Wave I, among businesses that reported a drop in sales, 57% of firms reported a decline of more than 50% relative to the same 30-day period in 2019. At the time of the Wave VI survey, the relevant proportion had decreased by 10 percentage points, to 47% of SMBs."

That's still a major decline in sales volume, but the situation is improving, in terms of overall loss. Again, you would expect that the Christmas sales period will also provide some assistance in easing these impacts.

In terms of employment rates, Facebook's data shows that the number of SMBs reporting a reduction in staff has remained fairly steady. 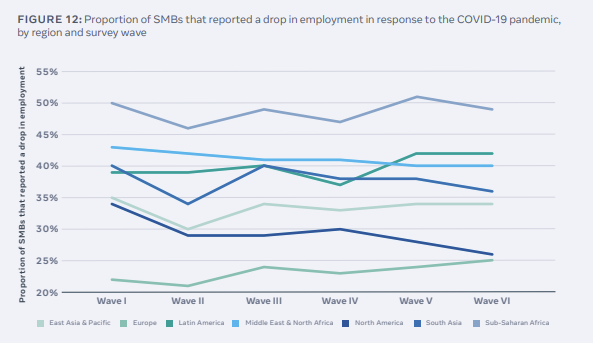 "In aggregate, the proportion of businesses that reported a reduction in employment in response to the pandemic remained at just over one-third (34%) in Wave VI. This proportion has stayed largely stable in each wave, increasing by 1 percentage point since Wave I in May."

That still means that more businesses over time are reducing their staff hours, but the impacts are not worsening, which is a somewhat positive sign for the broader economy. Once again, the Christmas period will have an impact here, but it will also be interesting to track how many businesses now lean more into eCommerce and online sales, and how that subsequently impacts future staffing levels.

The shift towards automated systems - like electronic check-outs and ordering systems - was already having a gradual impact on employment trends. Will COVID-19 see a major reduction in low-skilled positions as a result of changes to B2C process?

Facebook's full State of Small Business update includes a heap more information, with specific breakdowns on various regions and the ongoing impacts. And while we're now seeing movement on vaccines, we still have a long way to go, and this update provides a sobering look at how the economy will be impacted for many, many months yet.

You can download the full State of Small Business: Wave VI update here.