Is Facebook getting better at detecting politically-motivated misinformation networks, or are more groups looking to use the social media platform's reach to influence people, as a result of various, highly publicized campaigns?

There's no way to know for sure, but what we do know is that Facebook removed a record number of manipulative networks in the month of December, according to data in the latest edition of its Coordinated Inauthentic Behavior report.

"In December, we removed 17 networks of accounts, Pages and Groups, the most we’ve removed in any one month. We took down deceptive campaigns from nearly every continent and shared information about our findings with law enforcement, policymakers and industry partners."

Facebook says that the majority (12 of the 17 networks) targeted domestic audiences in their own countries, which is different to the most highly publicized example of Russian groups seeking to influence US voters back in 2016. Facebook says that most of the networks were also detected in their initial stages, limiting their impact, while many were also found as a result of coordinated information-sharing efforts between companies, researchers, law enforcement and investigative journalists.

That bodes well for Facebook's evolving enforcement processes, as more eyes seeking out these groups will mean more of them are being detected, especially those that are able to build any sort of relevant following.

It's interesting, too, to note the tactics being utilized. Facebook says that at least seven of the detected operations 'ran Pages posing as news entities sharing local updates about current events in the countries they targeted'. Which points to them learning from how Facebook has been used to influence opinion around news content in other nations. It's good to see Facebook stamping these groups out now, before they're able to take off - because as the recent Capitol riots show, 'alternative facts' can be highly damaging if allowed to proliferate at significant enough scale.

Looking at the month-on-month trends, there has been an uptick in these groups using Instagram accounts for such efforts, but nothing consistent enough to suggest a new trend or change in approach to what we've seen in the past. 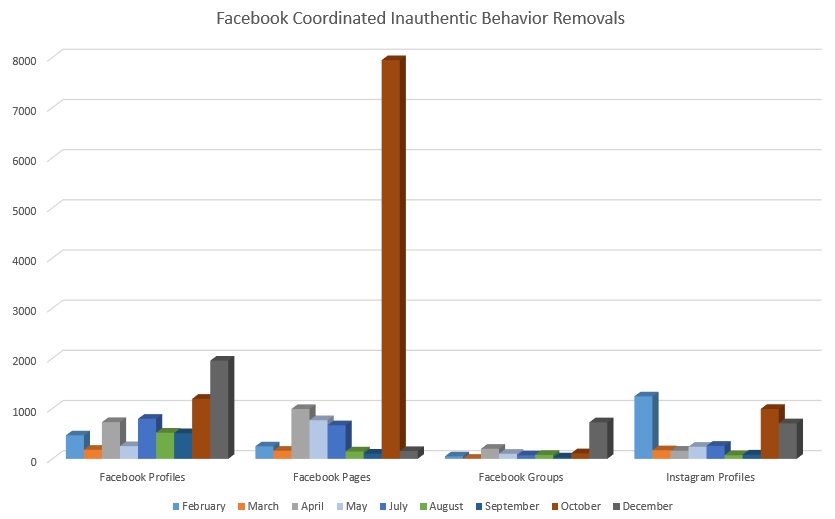 (That October spike in Facebook Page removals was due to the discovery of a network in Azerbaijan, linked to the Youth Union of New Azerbaijani Party)

In some ways, it feels like these stats could easily be overlooked now that the US Election has passed, but Facebook has a presence in virtually every nation, and it plays a significant role in information dissemination in all regions that it's available. As such, it's important to note the global trends, and how different groups are looking to manipulate the platform to win favor in their own regions.

Facebook is getting much wiser to the tactics, and it does seem that The Social Network is evolving its detection efforts over time.

You can read the full Facebook CIB report for December here.