Facebook is following Twitter's lead by adding new alert prompts when users go to share an article on Facebook if they haven't already opened the link themselves first. 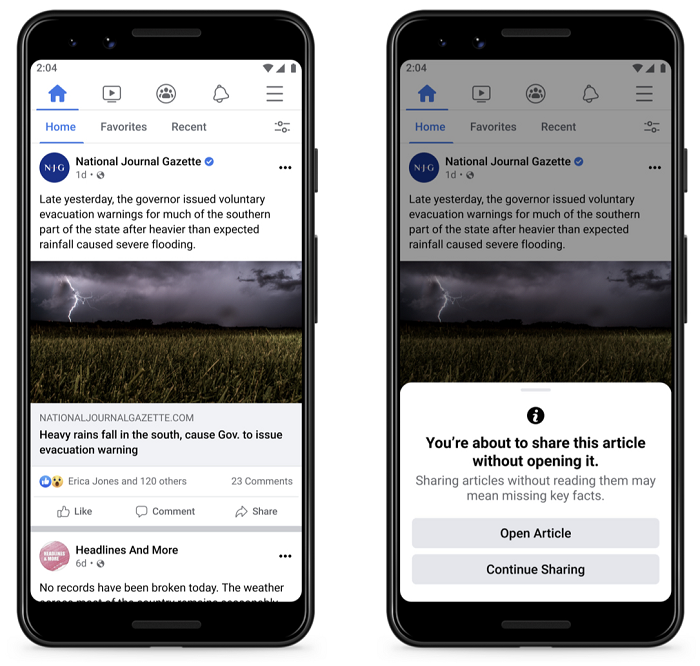 "Starting today, we’re testing a way to promote more informed sharing of news articles. If you go to share a news article link you haven’t opened, we’ll show a prompt encouraging you to open it and read it, before sharing it with others."

As you can see, the prompts will alert people that they're about to share a link they haven't opened, with a brief explainer on the potential issues with this approach.

That, ideally, will get more people to reconsider sharing links without understanding the full context, which could help to reduce misinformation, and angst, among Facebook users.

As noted, Twitter added warnings on sharing unopened links last June, which it says have lead to users opening articles 40% more often, and have slowed the rate of ill-informed amplification.

Twitter's results show the effectiveness of small measures of friction in the sharing process, which can lead to more informed, measured debate and discussion, by simply prompting users to take a moment to consider their action.

Facebook will be hoping for the same, and with a growing number of people now getting at least some of their news content from The Social Network, maximizing informed engagement, and subsequent debate, is an important consideration for the platform as it looks to play a more positive role in topical discussion and sharing.

Facebook also has warnings in place for when users go to share an article that's more than 90 days old, which aims to slow misdirected discussion around older content,  while Facebook's algorithm also takes into account the amount of time you spend reading an article after opening a link when measuring your relative interest in the content.

So Facebook does already have some measures in place to counter less-informed sharing and distribution, but these new prompts are a more direct approach in urging users to take a more active interest in what they're sharing, rather than being incensed by the headline, or taking such at face value.

Which is something we all do. How many times have you noted a headline as you scroll through your feed and taken that as enough of an indicator of the full story, without actually opening the link? I'll often note such when talking to people, like 'oh, isn't that because there was a new report about taxes going up?' But I don't know the full story, because I didn't actually read the article - but the problem is that many people are then starting full debates based on this shallow understanding of the issue, and/or their emotional response to a headline, which many news outlets now prey upon in order to maximize engagement.

If this small measure gets more people to actually take an extra moment to read the full context, that could have a big impact - and as Twitter's results show, it can be an effective measure in this respect.