Google searches for nearby businesses have seen a significant increase in recent times.

Indeed, according to Google:

"Every month, [we] connect people to businesses nearby more than 9 billion times, including over 1 billion phone calls and 3 billion direction requests to stores."

That's a lot of opportunity, particularly for SMBs. With this in mind, this week, Google has announced a new update of its Google My Business app, which is designed to make it easier to connect with local businesses, while also adding to Google's 'social-like' tools which are designed to fend off rising competition from social apps.

As you can see in the video, the new tools are focused on making it easier for businesses to add to their Google profiles, helping them manage what searchers see, while also providing new opportunities to showcase their business across Google's suite of apps.

The most significant addition is the simplified Google posts tool - as explained by Google:

"With a press of the new Post button in the app, you can upload a photo, create an offer or event and add it right to your Business Profile on Google. You can also manage your business information on Google from the Profile tab and watch your edits appear seamlessly across Search and Maps."

Google launched Google Business Posts last year, enabling organizations to create brief updates which can be listed in Google searches where their business appears. The tool is essentially a social post option from the search giant - with more search activity switching to Facebook in particular, Google Posts enable businesses to provide similar updates within search, where a lot more people are likely to go looking.

The option to post direct from the app will likely make it a bigger consideration for more brands - if you haven't considered Google Posts yet, it may be worth adding into your 2019 approach.

In addition to this, Google has also added a new 'Customers' tab in the app, which lists all the people who've sought to connect with your business via Google tools. 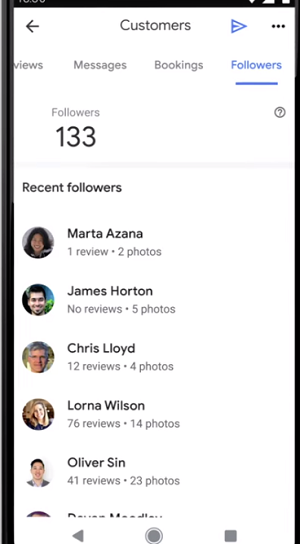 "From here, you can easily respond to customer reviews and post offers to your followers to keep them coming back in the door, and soon you’ll be able to respond to messages right from the app. And because Google My Business is always on the clock, we’ll be sure to notify you when you get a new customer connection."

As you can see from the screenshot, the 'Customers' listing is separated into various tabs, including 'Reviews', 'Messages', 'Bookings' and 'Followers', providing a clear overview of the type of feedback provided. This will help business better understand their audience responses, and strategize accordingly. Interestingly, Google also lists how many reviews each user has provided on Google overall, which could also be an indicator of who you should be reaching out to to maximize your own reviews.

Linked to this, you might also recall that Google recently added an option for users to follow businesses direct from Google Maps, which is another social-like way to build customer connection via Google search tools.

And the last major addition is improved presentation as to how people are finding and connecting with your Google Business profile.

"We’ve put your profile results front-and-center on the home screen so you’re always in the know."

Presented in a similar style to Google Analytics, the immediate insight on the front page shows you exactly how you're performing, making it easier to understand what your Google presence is doing for your business.

These are some interesting updates, and they'll definitely have value, especially for small businesses who, as noted, are already benefiting from local searches. In addition, Google has also announced a new option which will enable users to see the messages they've shared with businesses they've already connected with via Business Profiles within Google Maps. 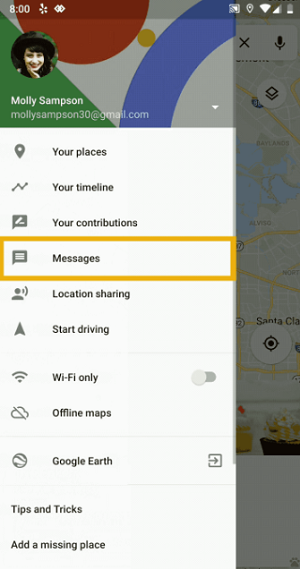 This is yet another social-like feature - rather than being just the home for discovery, Google is looking to add ways for businesses to better own their presence, and for searchers to connect, without having to do so in another - likely social - app.

Google, of course, has known about the rising threat from social networks for some time - with more people spending more time in social apps, they're also, inevitably, conducting discovery within those same tools. That's been slowly eating into Google's core search business - Google sought to counter this with its own social network, but that, as we know, never really worked out.

With Google+ gone, it looks like Google will revert to adding similar tools into what it does best - rather than just letting social apps take away traffic, Google's looking to capitalize on its strengths, and make it more valuable for businesses to expand their Google presence, as opposed to focusing elsewhere.

And given Google still drives the most search traffic, by a big margin, and particularly with the addition of Google Maps, it could end up being a significant move for the search giant. Expect to see more along these lines in 2019.