Google is Working on Chatbots Which Can Engage in a More Genuine, Human Conversation

While there are now more than 300,000 active chatbots live on Facebook Messenger, chatbots, as a functional option, have never really gained traction the way that Facebook might have hoped.

Initially, after the launch of its Bot Platform, Facebook envisioned an all-encompassing future for Messenger bots, modeled on the success of similar tools in the Chinese market, though with expanded functionality. Indeed, former Messenger Boss David Marcus (who's now in charge of its Libra cryptocurrency), remarked that Messenger bots would "transcend their Clippy origins and appeal to the masses".

But they haven't, at least not yet. Part of the problem is that people don't seem to have warmed to engaging with bots, or brands in general, via Messenger, where they more commonly speak with close friends. But another key issue could be that the existing bots themselves simply aren't very engaging.

Talk to your home speaker device and you'll see what I mean - unless you say the exact right thing, and it hears you exactly right, the device won't understand what you're asking.

This is a key limitation that every bot and AI developer is trying to address. And this week, Google has shown a glimpse of the potential way forward, via a new bot system that it's developing, which can recognize significantly more patterns of conversation, and hold a discussion with you to an almost human degree.

"Current [...] chatbots have a critical flaw - they often don’t make sense. They sometimes say things that are inconsistent with what has been said so far, or lack common sense and basic knowledge about the world. Moreover, chatbots often give responses that are not specific to the current context."

To address this, Google has built a new chatbot model called Meena, which is trained on a "2.6 billion parameter end-to-end trained neural conversational model", and can conduct conversations that are more sensible and specific than existing bots.

Google says the Meena's performance is actually closing in on human conversation - using an evaluation metric that it calls the "Sensibleness and Specificity Average (SSA)", which captures "basic, but important attributes for human conversation", Google says that its Meena model outpaces all other chatbot options on the market, and is rising to common human level. 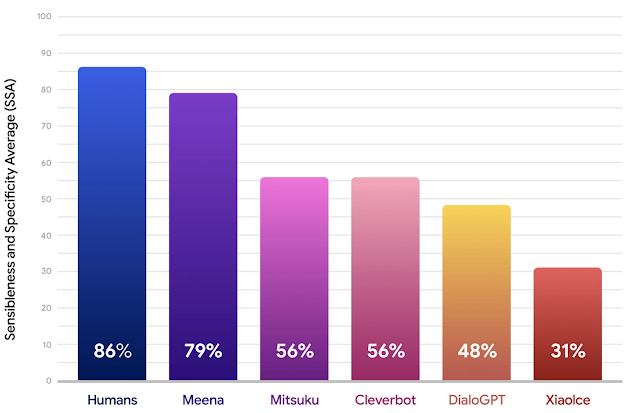 That could be a significant evolution for bot usage. If bots can hold more genuine conversations, that could make them more engaging, and improve adoption, either through novelty or practicality. The latter would be the driving force in sustained bot use, but the advances here show that bots could still become a far more significant offering, and that we may soon see a future where bots converse with us, similar to Tony Stark's Iron Man suit, in engaging, reactive and realistic ways.

Will that lead to the mass adoption of tools like Messenger bots? It's impossible to say, of course, but it is worth noting that the next level of bot development is on the horizon, which could be something to keep tabs on in your digital marketing development.

Google isn't making the Meena model available as yet, and much work still needs to be done. But bot systems are evolving, and that could, eventually, make bots a more significant consideration, both for consumers and businesses.

You can read more about Google's Meena bot model here.