Here’s a look at some of the key announcements for digital marketers stemming from the event.

One of the big highlights of I/O day one was the announcement of Google’s more immersive Maps feature, which merges Street View and aerial images to create a more comprehensive, interactive digital model of the world.

The new Maps updates will also enable users to experience what a neighborhood, landmark, restaurant or popular venue looks like, via your device.

Which looks impressive, and could become an important consideration for marketers looking to showcase their business online, with increasingly engaging Maps perspectives being built by Google’s team. The new format also includes additional information markers overlaid on-screen, which could also point to new advertising and promotional opportunities, especially for tourism-related businesses.

“Looking for a spot for lunch? Glide down to street level to explore nearby restaurants and see helpful information, like live busyness and nearby traffic. You can even look inside them to quickly get a feel for the vibe of the place before you book your reservation.”

That could end up being a major element, in various ways, while it also leans into the next stage of Google’s advanced AR development and integration into its Search features.

Speaking of AR, Google also showed off its own AR glasses prototype, with an example of how they could enable the wearer to see language translations in real time.

Google didn’t provide any further insight into when they might be made available to consumers, but it’s interesting to note another player in the coming AR arms race.

On the ads front, Google’s testing a new carousel ad format in Search results, which will provide another way for shoppers to browse directly from the SERP.

As you can see, the option would bring the now familiar carousel ad display format to Search, which could help Google lean into the increasing interest in eCommerce, and expand its own shopping ambitions.

In another ads-related announcement, Google also unveiled a new ads control dashboard, which will enable users to control how their ad experiences are personalized across Google’s apps and sites. 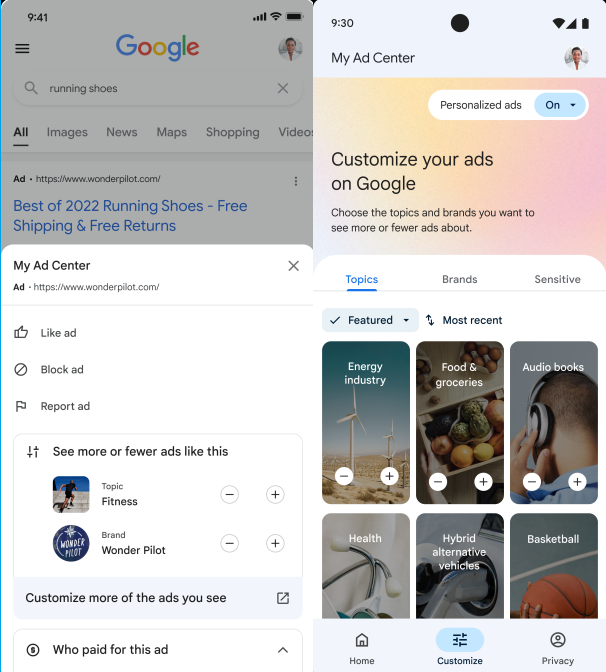 The new ad center, which will be accessible on all Google ads, will enable users to like, share or block any ad, and/or glean additional insight into who paid for the ad, and why they, specifically were targeted within that campaign.

Tapping on ‘Customize more of the ads you see’ will take you through to the second screen above, which provides even more controls over your Google ad experiences.

It’s an interesting development to watch for advertisers, as it could impact targeting accuracy if enough people do switch off – but then again, similar controls have been available in other apps for some time, and few users actually go to the effort of actioning such.

Google’s also looking to make online payments more secure with a new ‘virtual card’ option that would enable you to pay for products online without having to enter your actual credit card number. It’s similar to how password generators work, creating random codes that are attached to your Google identity, with your actual, physical card details then kept hidden from vendors.

As you can see in this example, soon, when you’re viewing a web page in the Google app, you'll be able to bring up a new tab with additional information about the source URL, “including a brief description, what they say about themselves and what others on the web say about them”.

That could provide more context as to what you’re seeing on each site, and how trustworthy the page is.

Google’s also making it easier for people to remove search results about them that include personal information.

As shown here, Google’s rolling out a new, simplified application flow that will enable you to request removal of identifying features in Search.

“When you’re searching on Google and find results about you that contain your phone number, home address, or email address, you’ll be able to quickly request their removal from Google Search - right as you find them. With this new tool, you can request removal of your contact details from Search with a few clicks, and you’ll also be able to easily monitor the status of these removal requests.”

Google also recently expanded its appeals process for the removal of search listings that include personal information.

There’s also been a range of updates about Google’s hardware devices, including its Pixel phones. You can catch all of Google’s I/O announcements as they come through here.

Google’s I/O conference will run for a second day tomorrow, where the sessions will switch from product announcements to developer elements.