How to Play by the Rules with Instagram Contests (Including Examples)

Contests can be a highly effective way to boost your brand presence on Instagram, and can generate tons of engagement - probably more so than they do on any other social network. But while running an Instagram-based competition can be beneficial, there are also specific rules you need to abide by, in order to ensure you don't fall foul of the platform's rules (and get penalized as a result).

In this post, I'll highlight some examples of brands - both large and small - who have run Instagram contests, and take a look at whether they've followed Instagram's rules. This will help contextualize the specifics of Instagram's regulations, in order you don't fall foul of them in your own efforts.

What to include in Rules for an Instagram Giveaway

First off, here's a rundown of the Instagram contest rules that you need to adhere to in your promotion:

Now that we know what the rules are, let's take a look at some real-world examples of Instagram contests in action, and see what they could be doing to better work within Instagram’s rules - as well as what they could do to make their contests or giveaways even more powerful.

Instagram Contest Rule #1: "Acknowledge that the contest is not sponsored, endorsed, or administered by, or associated with Instagram" 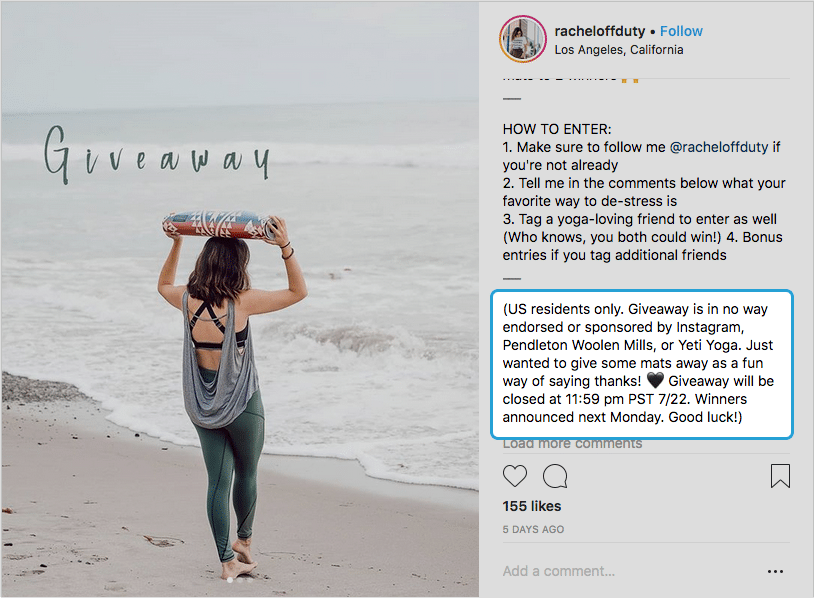 What they did right: Rachel Off Duty has noted right up front that their contest isn't associated with Instagram. The brand has also included clear instructions on how people can enter, and has asked people to share a genuine comment, which could eventually be used to learn more about the kinds of activities its followers enjoy.

What could be better: To build an email list, rather than just collect new followers, Rachel Off Duty could have offered people extra chances to win by creating a simple landing page, linked to from the profile bio. The brand could also have used third-party software with marketing automation features to confirm entries and send other emails to let followers know about upcoming events.

What they did right: Westy Co.'s giveaway announcement is easy to spot in the Instagram feed. The photo is appropriate for Instagram - and on target for this camp/surf/snow brand - while they've also added a bold text overlay to catch people's attention. Like Rachel Off Duty, they state clearly that the contest isn't affiliated with Instagram.

What they could have done better: I'm not a huge fan of contests which ask participants to tag a bunch of friends. For one, your friends might not be the right audience for the brand, while they might also find it annoying, and that could create a negative response to your brand. Instead, Westy Co. could have asked people to share their own photos using Westy Co.'s #westcoastwanderer hashtag, avoiding the potential concern.

Instagram Contest Rule #3: "The dates the campaign will run, including the time zone"

What they did right: The University of North Carolina has used a contest to collect user-generated content from a very specific community, and they've included every necessary detail about the entry period.

What could be better: If UNCW wanted to use the UGC they collected on the school's website, or in other collateral, they could have used third-party software to pull all the entries into a gallery. The image also contains a lot of copy which would probably have been better if published on a landing page.

Instagram Contest Rule #4: "Include restrictions, for example, location and age"

What they did right: Suezhomefaker has informed participants about entry restrictions, including age and location, and has also told them exactly when the winner will be announced, down to the specific time zone note.

What could be better: In order to receive extra chances to win, Suezhomefaker has asked people to repost their image and tag them and the brand whose products are being given away. There's no easy way for the business to check to see if people have actually done what's been asked, meaning it could turn out to be a very time consuming process, dependent on the number of entries. To make things easier and more useful, the company could have awarded extra points to people who linked to a landing page from their bio and filled out a short form.

Instagram Contest Rule #5: "Include detailed guidelines on how to enter" 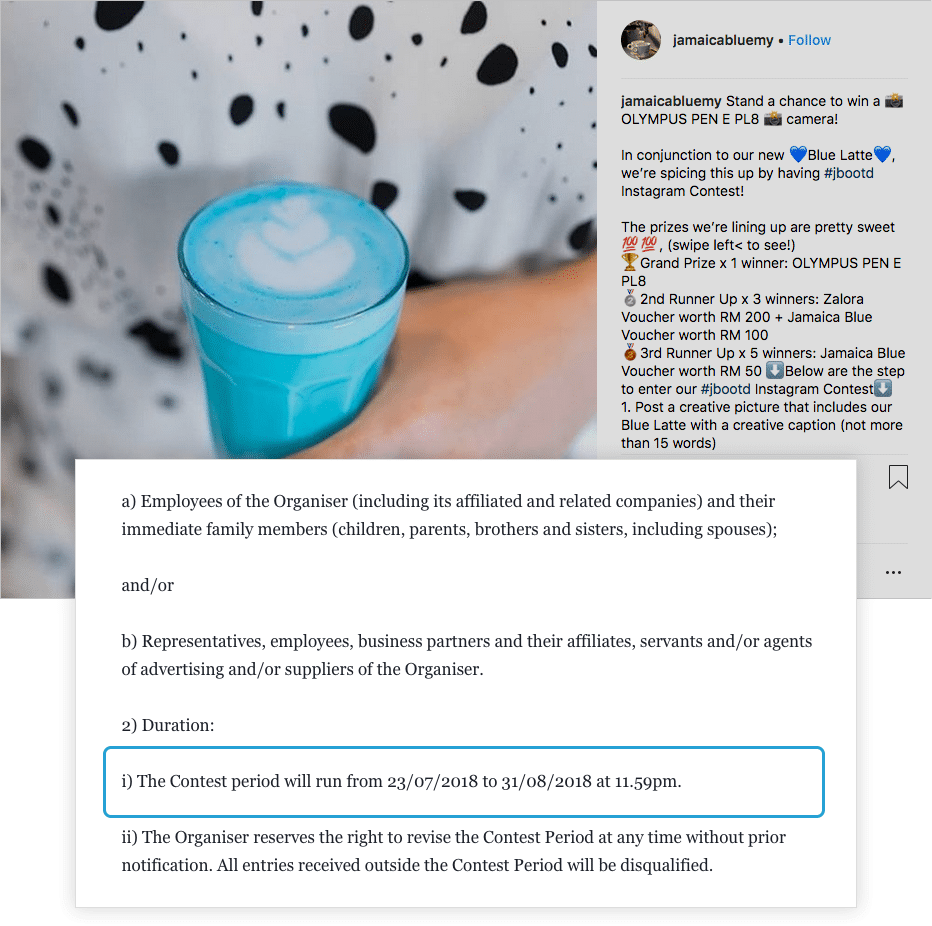 What they did right: Honestly, this Australian coffee brand is doing so many things right. They've added a link in their bio which directs people to a landing page where they can find additional details about their new product. The landing page also has a popup which requests an email address for people who want to receive their newsletter, and news about special events.

What could be better: The only rule "violation" I see is that they should have included their time zone for the contest end date.

Instagram Contest Rule #6: "Description of how and when the winner(s) will be chosen" 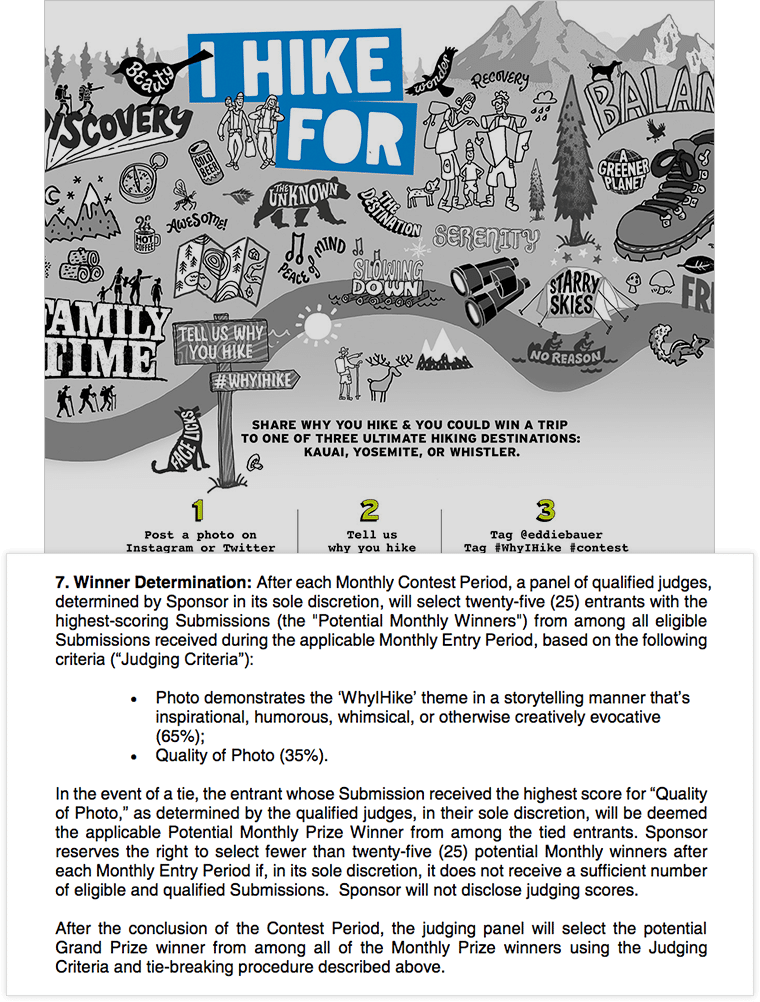 What they did right: Eddie Bauer has done just about everything right, including adding the details about how they'll determine the winner each month. They've got a very vibrant Instagram page and they've done a great job in promoting their hashtag - #WhyIHike has more than 60,000 posts (not all of them are also tagged with #eddiebauer, but a large percentage seem to be).

What could be better: Eddie Bauer has nailed it from start to finish, including covering all the rules on their landing page.

Instagram Contest Rule #7: "Details about how and when the winner(s) will be announced and when to claim the prize."

What they did right: Shoegallery Online has offered a somewhat unique take on tagging by asking people to comment with emojis (which I love). They've also made it clear that the contest is only for people who live in the U.S.

What could be better: They haven't included details about how the winner will claim Shoe Gallery's prize - presumably they'll do so when they contact the winner?

Instagram Contest Rule #8: "Details about how the prize will be delivered, including whether the recipient is responsible for delivery or pick-up"

What they did right: In the caption, The French Folk has let participants know how they'll choose a winner, and when the winner will be notified. They've also made sure people are aware they may be responsible for the cost of shipping. By clearly spelling out the terms, The French Folk will be able to avoid any complaints about the cost associated with shipping the prize.

What could be better: As with so many Instagram contests, the "tag as many friends as you want" instruction could ultimately be a hassle for The French Folk. People could complain about being spammed, and this setup likely won't give them leads they could use at some other point down the road.

Hopefully these examples help you better understand the various Instagram contest rules, and how to utilize them to best effect within your own promotion. There's a heap of creative ways you can use Instagram contests, and they tend to generate a heap of engagement, boosting brand awareness (particularly with Instagram's algorithm favoring post activity).