Still in a social media coma after some brutal campaigns in 2017?

Fear not, because the year has changed, and you have the opportunity to right all wrongs, and jump aboard the social media trends of 2018 that can make or break your business.

As you plan your social media marketing this year, make sure you implement some or all of these five strategies to maximize your return on investment.

Nowhere is the concept of stories more evident than on Instagram, where brands are harnessing images and videos to tell audiences why they exist, and how they can fulfill a need or solve a problem for that audience.

Instagram Stories enables users post a series of images or videos, add text, stickers and a link, and have it remain on their profile forever within the new Stories Highlights section. More than 300 million people use the feature every day, providing a range of new opportunities for businesses to reach their target audiences.

Recently, J. Crew used three images to intrigue readers to engage deeper with its brand, including the final image below, which not only made great use of a funny picture, but also included a powerful CTA: 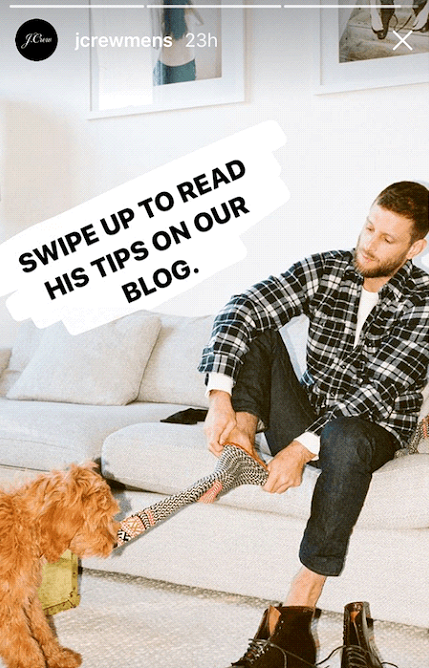 And of course, the man in the photo is wearing J Crew gear, which is a sneaky way to model a product without it feeling like a sales promo.

Virtual reality (VR) is all about using computer-generated images to immerse users in another environment - and for brands it can be a powerful tool to boost engagement which can also reap other benefits.

For example, the shoe and accessories company Toms has built its brand on encouraging people to give to others. Tom’s puts its core value into play by helping a person in need every time a customer buys one of its products.

Toms went a step further to communicate these values by posting a YouTube 360 video where users could become immersed in a ‘Virtual Giving Trip’ that brand members took to a village in Peru to give underprivileged residents free shoes.

VR enables companies to provide an experience, instead of just selling products. By allowing the audience to see Toms work in action, customers and prospects are able to get a better understanding of how Tom’s values apply to real-life situations.

3. Brands Will Use Augmented Reality in Creative Ways

Unlike VR - where users are plunged into an imaginary environment - augmented reality (AR) superimposes computer-generated images onto real-world environments.

The Pokémon Go craze a couple of summers ago showed how brands could engage their audiences by creating games or campaigns which married computer-generated images and the real-word in interesting ways.

And leave it to a brand whose logo is of an old, grey-haired man to reinvigorate its marketing by creating a fresh and fun AR campaign on its Facebook tab.

Orville Redenbacher’s Pop Cam Game allowed users to use a computer and a webcam to catch ‘virtual’ pieces of popcorn in their mouth.

The game superimposed popcorn pieces onto a viewer’s screen, and players had a specific time period to ‘catch’ as many pieces a possible.

The game also took automatic photos of users with their mouths wide open trying to eat the popcorn, and allowed them to share these images on Facebook. 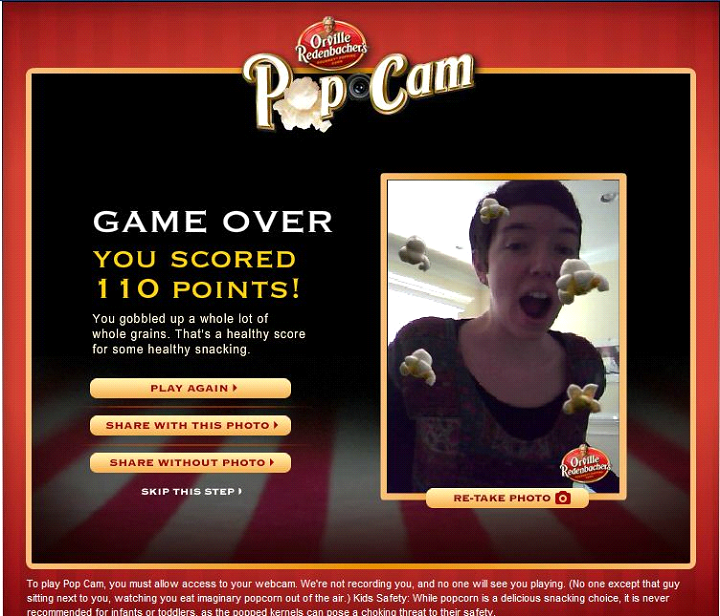 The trick with AR marketing is for brands to make sure that the campaign isn’t forced - in other words, digital popcorn pieces are a brilliant idea for a popcorn company, because that is a core product.

Businesses with less obvious core products and services will have to find creative ways to use AR as a marketing opportunity, but make no mistake, those opportunities do exist to those with a creative vision.

4. Messaging Platforms Will Grow in Importance

We don’t often think of messaging platforms as part of social media, but they are, even if brands haven’t taken advantage of these opportunities.

WhatsApp and Kik are two of the biggest messaging platforms, with a combined active user base of some 2.5 billion people around the world. Are you seeing the possibilities yet?

Heineken did, and launched a social media campaign on WhatsApp built around the European soccer Champions League final, a global event.

Fans who were watching a Champions League soccer match could text the word ‘Champions’ to the Heineken WhatsApp number after confirming that they were 18 or older.

They then received five soccer trivia questions, and five correct answers qualified them for a drawing to win a trip to the Champions League Final.

The campaign took advantage of the ease of texting on WhatsApp, and engaged fans with the opportunity to win travel and tickets to the Holy Grail of club soccer competition in the world.

5. Digital Hangouts Will Become a Thing

Brands are increasingly going after Generation Z - people born in 2000 and after -  as this group now has huge influence on social platforms, particularly Instagram and YouTube.

And increasingly, Generation Z is gathering on digital hangouts like Houseparty, a group chat app that launched in 2016 and already has more than a million daily active users.

The opportunity exists for brands to tap into the digital hangout trend and create campaigns in which multiple users can connect on video and take virtual trips that let them browse products, services and games and talk about the experience as it’s happening.

The digital landscape is increasingly littered with businesses which refused to adapt, which have since been replaced by forward-thinking brands agile enough to embrace new ideas and new concepts. Social media marketing is expanding and changing as technology offers new opportunities and new challenges. The question is, will you be ready?