It can’t be an easy job to be on Facebook’s PR team right now.

In amongst the controversy around how the platform’s data was reportedly mis-used by political activist groups, The Social Network still needs to release updates and new features, and do so in a way that remains separate from the broader, negative discussion.

That’s somewhat evident in Facebook’s latest update for Messenger, in which the company is once again pushing the value of groups, which is part of Facebook’s over-arching effort to ensure they prompt participation online, as opposed to facilitating passive consumption (according to Facebook’s research, passive consumption is bad for your mental health, but active interaction is good).

On Messenger, Facebook says that more 2.5 million new groups were created on the platform ‘every day last year’. Now, that may seem like a lot, but Facebook considers any connections you repeatedly interact with on Messenger as a ‘group’, so the definition is a little more stretched than what you might traditionally assume.

Catering to this – and, as noted, aligning with Facebook’s efforts to ‘Make The Social Network Great Again’ – Facebook’s now rolling out Messenger group admin privileges, which will enable users to activate an approval process for new people looking to join your chat.

“Admin privileges allow you to approve new members before they join your group chat. This is especially helpful in large group chats with people you may not yet be connected to, like when you’re planning a friend’s surprise birthday party with different groups of friends. Admins also have the ability to remove members if needed, and promote or demote any other person in the group chat as an admin.” 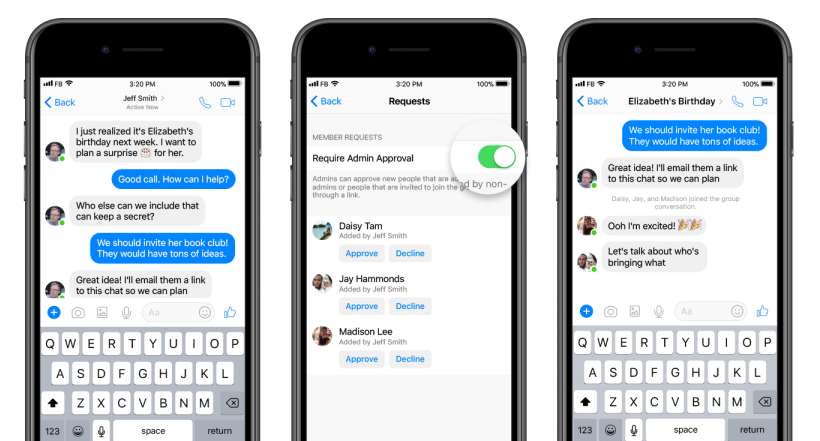 Essentially, this makes Messenger’s chat sessions more like Facebook groups. Facebook says that Messenger’s admin tools will be off by default, giving users the option to turn them on if need be.

Group chats can include up to 250 people, so the tools will definitely have some value, while it’ll also give Facebook another way to encourage larger chat forums, ideally boosting engagement.

And if you are looking to expand your Messenger chat groups, you now have another way to do that too – Facebook’s also adding joinable links, which you can send on to people to connect them through to your group.

“Anyone in a group chat can create a custom invite link and share it with someone they’d like to join the conversation. People who tap the link will either be added to the group automatically if approvals are off, or will be added once the admin has approved the request.”

The option will help streamline the connection process, but both tools could also have brand and marketing implications.

With chat approvals, for example, you can set up exclusive discussion groups for your top advocates, giving them an insider perspective on upcoming releases, while the ability to send links to relevant chats can also help you connect the right people to the relevant brand discussions, enabling brands to share advice or invite customers into chat sections.

As noted, Facebook’s been very keen to push groups in their main app, and group chats on Messenger have also been growing. In addition to the new tools announced today, Facebook also notes that they’ve added various other group chat features over the past year.

And that’s not to mention the growth of Messenger video chats, which doubled to 17 billion video calls in the app in 2017.

But as noted, it is interesting to see Facebook’s PR team dance around the issues of the day, and attempt to put an overly positive spin on their additions.

See? Facebook’s not all bad, there are positive things that Facebook’s platforms facilitate. Don’t delete your Facebook account. Please.