While Snapchat is known as the key place to reach younger users, as the home of tech-savvy Millennials, Snap Inc. itself rarely provides any detailed figures on exactly how many people are using each of its elements, on who, exactly, you’ll be able to reach by marketing through the app.

Of course, there are overall figures – 178 million daily active users, 30+ minutes per day spent in-app, reach to some 88 million people in the US with a given ad campaign. But those don’t specify how people are actually using the app, what type of performance you’re likely to see, specifically, within each element.

We did get some insights on this in Snap Inc’s official IPO documentation, but Evan Spiegel and Co. are very guarded, they don’t outline much in terms of performance. That’s why this new report from The Daily Beast is so interesting – the publisher has been able to get access to five months worth of confidential DAU metrics for nearly every feature in the app.

The data covers the period between April and September 2017 - here’s some of what they were able to found out.

The biggest revelation of the report is the way in which Snapchat users are actually using the app. While publishers have been keen to build their presences within the Discover section, and new elements like Snap Maps have seemingly shown promise, the data suggests that most users focus on using Snapchat exclusively as a messaging app, with other elements, including Stories, getting far less focus.

“The data shows that users sent personal snaps to friends more frequently than they posted to Stories. In August, users were 64% more likely to send a snap to a friend than post to Stories and sent an average of 34 chat messages per day.”

That makes sense – personal messaging is where Snapchat started – but the problem, from an advertising and marketing perspective, is that those other elements are where Snapchat can make the most money. Personal messaging doesn’t offer the same capacity to insert ads or sponsored content, so while more users interacting more often is a good thing (and as you can see from the above chart, those interactions are growing over time), it’s not necessarily great news for the company's monetization prospects.

That said, according to The Daily Beast, the volume of photos being shared on Snapchat is impressive, with many more users sharing visual messages than they are on other platforms. That may provide additional opportunities for brands to connect – though the focus of your Snapchat campaigns may be better aligned with direct messaging, as opposed to Stories and the like. And that’s a much tougher road, especially when looking to deliver content at scale.

Another element of interest is the usage of Snap Maps. Snapchat introduced Snap Maps last June as a way to better showcase more of the content being shared in the app and provide additional functionality. Snap Maps also provides more capacity for businesses to gain exposure through the app, particularly in alignment with Context Cards, providing business-specific info in-stream.

And while Snap Maps generated attention when first launched, the data shows that interest has since waned.

“In the month of September, an average of only 19 million users checked Snap Maps daily, just 11% of the app’s total daily user base.”

As part of Snap’s coming re-design, discovery features like Snap Maps are set to get more focus, which Snap’s no doubt hoping will help boost this element and keep users engaged with such content for extended period. 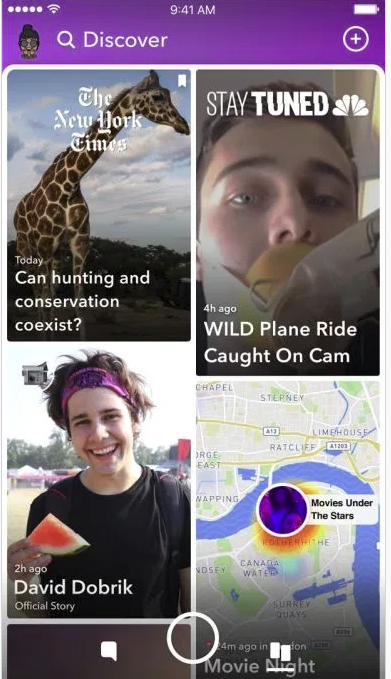 But still, as noted, direct messaging is the main usage of the app – and in another element, we can also see that consumption of Discover content is also lower than many would have suspected.

“…only an average of “20% of Snapchat users consumed content from a Discover Edition daily.”

That’s not great news for Snap Inc. Again, the coming redesign aims to separate these aspects and put more focus on their publisher and content discovery elements, but given most people are using the app to stay in touch with friends, it’s hard to see how dividing this element into a separate section is going to broaden usage.

There’s a heap of other data points in the full report, including notes on Lens and Geofilter usage (both sponsored and organic), and how users have adapted to the addition of Memories, enabling them to keep and re-post Snaps. Most of the insights on these elements show reasonably flat usage trends, which is in line with Snap’s wider performance reporting. That’s not necessarily a bad thing, incremental improvement over time is still improvement. But they’re not hugely inspiring numbers either, and they underline why Snap Inc. is looking to revamp the app and boost performance.

There's also this - a listing of Snaps posted to Stories by day of the week:

It’s an interesting view into where Snapchat is at, performance wise, while the data also further underlines the significant threat Instagram poses to the app’s long-term viability.

Will the coming re-design get Snap back on track? Looking at these numbers, it’s hard to see how it will, but it’s impossible to say till we know exactly how the new processes will work, and be adopted by Snap’s user base.