Should your business take a stand on political issues?

It’s become a more pressing query in these days of political division – with all the debates happening around such a wide range of issues, taking a stand is important, but it can also mean you run the risk of losing segments of your audience. So should you do it?

This is the focus of Sprout Social’s most recent survey, in which they asked more than 1,000 U.S. consumers for their thoughts to get a better understanding of how people want brands to ‘communicate their position and engage in conversations on political and social issues’.

Here’s what they found.

According to Sprout’s research, 66% of respondents indicated that it’s important for brands to take a public stance on leading social and political issues, including immigration, human rights and race relations. 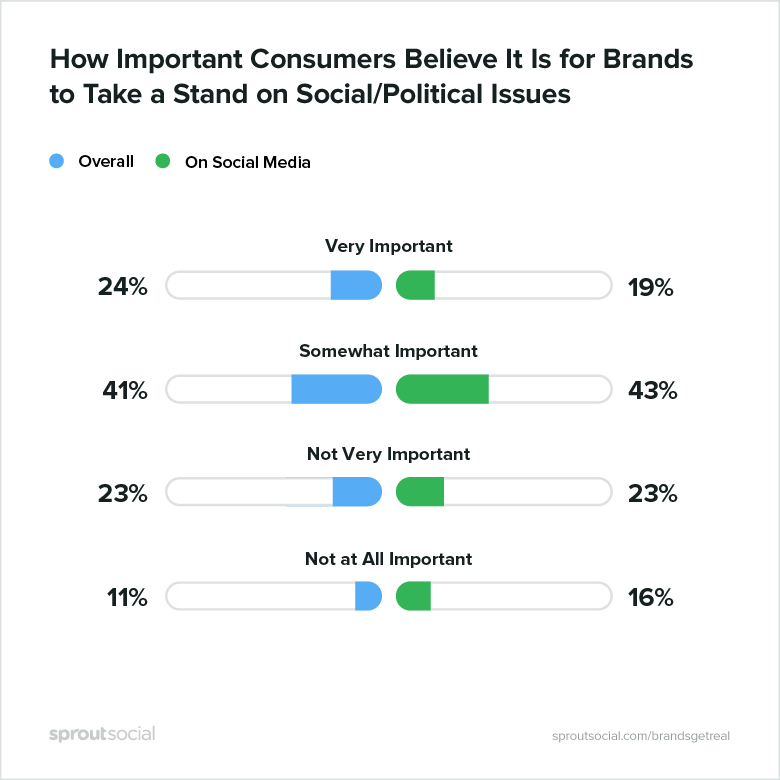 As you can see, fewer indicated that it was ‘very important’, but the majority believe it’s ‘somewhat important’ for brands to state their position.

What’s more, the majority of respondents also felt that social media is the best platform for such representation. 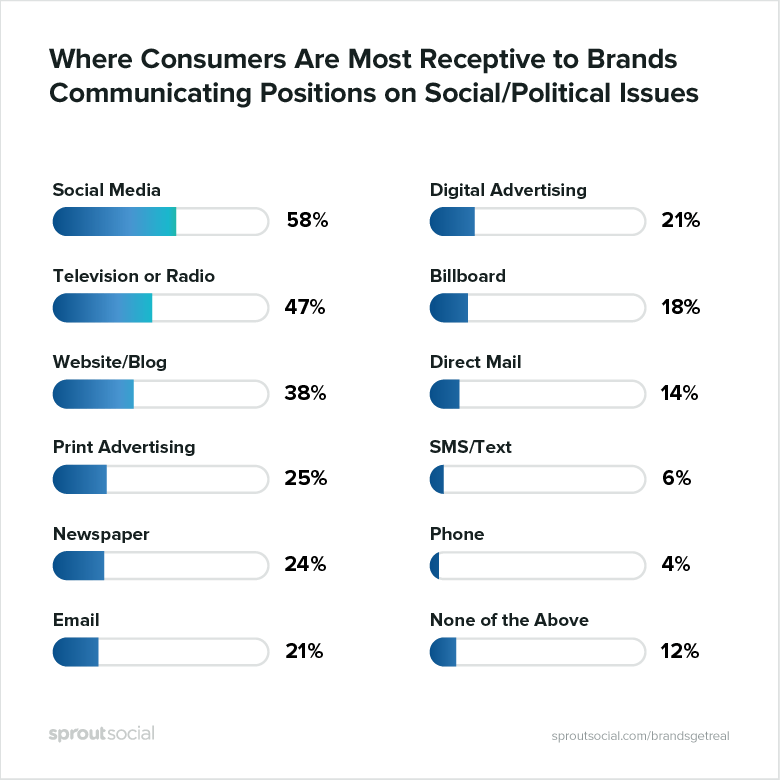 That makes sense – social media is where brands can have a voice, can share their thoughts on everything, as opposed to it being a broadcast channel normally restricted to ad messages. But even with the majority of people looking for brands to state their position, it still seems like a professional risk. Most social media managers would work to avoid political stances and conversations – it’s likely not relevant for a brand that sells, say, paper to air its thoughts on immigration policy.

This is the focus of the next element of Sprout’s research – while people want brands to have an opinion, relevance to their actual business is also important.

“While it’s impossible to know how people will feel about and react to every social or political stance taken, brands can insert themselves into only the right situations to prevent unnecessary backlash.”

According the Sprout, the essential question brands need to ask themselves when commenting on a political issue is ‘Why should people care?’

Why is your brand commenting on this issue? Is it because its relevant to your business, or is it just newsjacking, tapping into a trending conversation, which can ultimately have negative consequences if you’re seen as trying to cash in?

This stands for any issue or trend – if there’s no relevant angle for your business to comment, maybe you should just leave it. There are exceptions – brands have been able to take absurdist or humorous approaches to certain issues at times – but in general, you need to pick and choose which topics you comment on, and how, and why, your brand voice is relevant on the topic.

According to Sprout’s data, the main reason a brand should consider commenting on such an issue is because the debate directly affects a businesses’ customers. 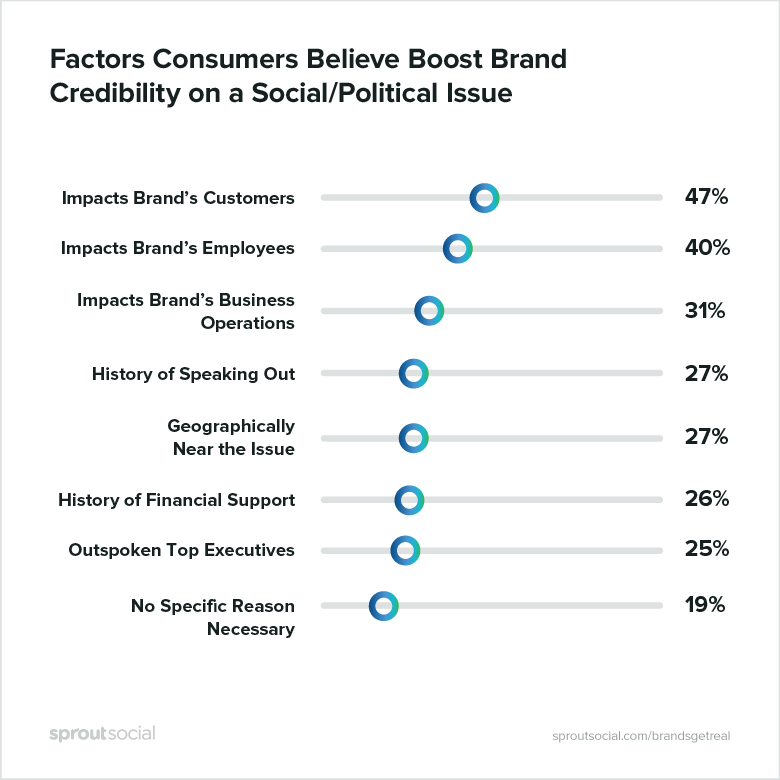 Impacting a brands employees and/or business operations are also key reasons people expect a brand to say something – and really, when you break down the reasons for possible response like this (above), the motivations seem fairly obvious.

Rather than looking to tap into every political issue, when there’s one of direct relevance to your business, consumers are keen to know what a business thinks. Which, really, is a fairly logical expectation – though it still carries some divisive risk.

Splitting the fan base

Still, despite this research, the risk of dividing your audience, in any way, is likely too great for most businesses to consider. But Sprout’s data actually shows the opposite – according to respondents, brands can benefit, more than lose out, when taking a stand on the right issues.

“Instinctively, people’s reactions are stronger when their own values align with what brands are saying than when they don’t. A greater percentage of consumers will show brand loyalty in times of agreement than will boycott a company in times of disagreement. The same pattern holds true for publicly praising versus criticizing companies.” 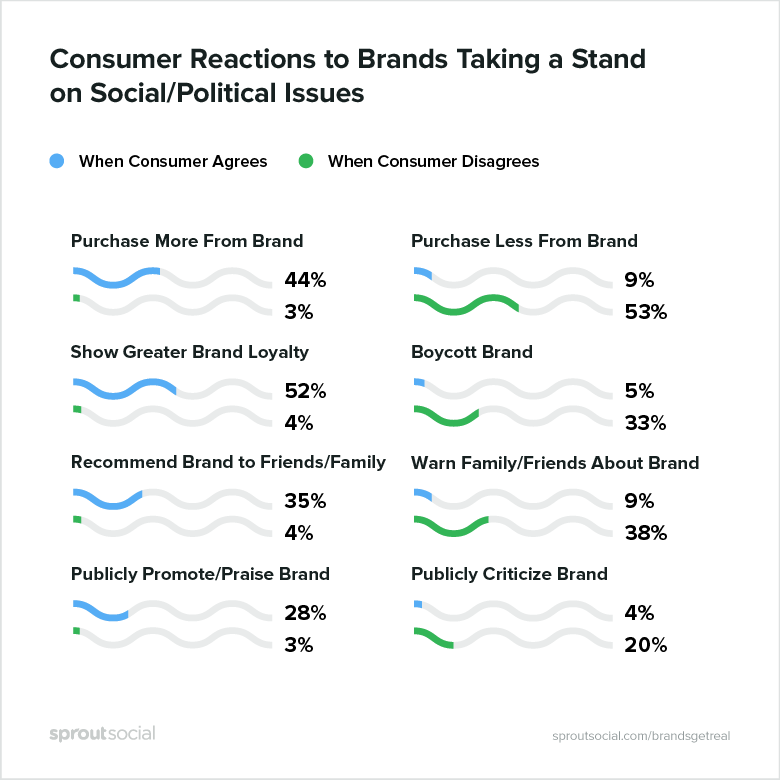 “…three of the top five emotional reactions people say they are likely to have in response to a brand taking a stance are positive, and emotion is a top driver of building long-term loyalty.”

Certainly, there remains a level of risk in turning off those who disagree with your stance, but the potential loyalty benefits are significant, and outweigh the risks of turning people away.

And another interesting note – particularly with Facebook’s coming News Feed shift, which will put more focus on interaction:

There’s a heap more insight in the full Sprout Social “Championing Change in the Age of Social Media” report, including more specific insight into how brands can take a stand, whether it’s more relevant for the CEO or the business to comment, and specific notes on the differences between Liberal and Conservative voters in the US.

While it can be a risky area, the data suggests that there are clear brand benefits to taking a stand on relevant issues - which, given the rise of political discourse in the current climate, could be a key consideration for businesses.

You can read the full Sprout Social report here.