In case you needed another reminder, and in case you were wondering why Facebook’s so focused on winning back young users, a new survey from Forrester, incorporating responses from over 4,600 teenagers in the US, has found that TikTok has seen a 13-point year-over-year rise in weekly usage, while Instagram has declined 4 points in the same period. 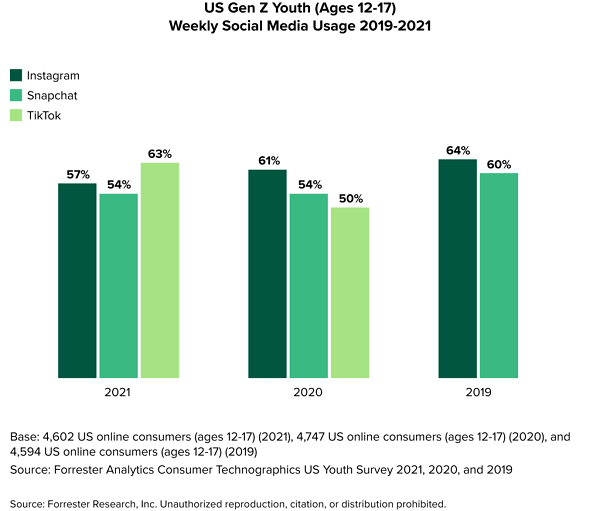 As you can see in this graphic, according to Forrester’s ‘Consumer Technographics US Youth Survey’, 63% of teens in the US indicated that they’re now using TikTok weekly, up from 50% last year, compared to 57% for Instagram (down from 61%).

The numbers underline TikTok’s rapid growth, and its popularity among younger audiences, which is an element that’s been freaking Facebook – now Meta – out for since late 2019, when TikTok suddenly became a real trend, and a real potential threat to its dominance in the market.

Meta’s usual approach to such challengers has been to first try to buy them out before they get too big, but that process was, at least in part, based on its controversial Onavo VPN monitoring program which helped it track key app trends as they rose. Meta was forced to shut down the Onavo tracking program in January 2019 due to its intrusive nature, which saw it essentially gathering data on app usage from many teens, and paying them a small fee for providing such access. Upon discovery of the program, Apple banned Onavo from the App Store for violating its policies, before Meta closed the program for good in response to a TechCrunch investigation.

That reduced Meta’s insight into rising trends, which seems to have left the company more vulnerable to competition from TikTok. Without its Onavo program monitoring trends among young users, TikTok’s saw major growth throughout 2019, with 44% of the app’s all-time downloads (at that time) coming within the period.

As a result, Meta then moved to phase two of its competitor mitigation playbook - replication – with the launch of Instagram Reels in Brazil in late 2019, before expanding the function selected European markets, then India in July 2020, just days after TikTok was banned in the region due to geopolitical tensions with China. 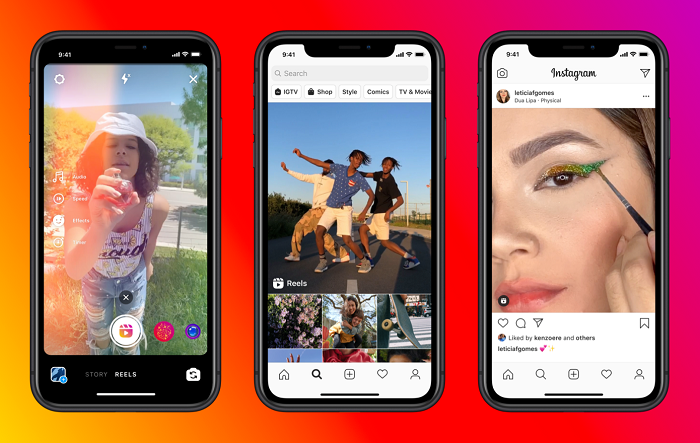 But as this new report from Forrester shows, along with various other studies, the arrival of Reels hasn’t slowed TikTok’s expansion, and while Facebook has also prodded US Government officials about security concerns related to the Chinese-owned app, and has since rolled out Reels on Facebook as well, none of its past measures to fend off competition have worked in the same way, as TikTok continues to steal away younger audiences, and relegate Instagram to the back seat.

In further examining these trends, Forrester found that users see TikTok as more ‘fun’ and ‘funny’, and a more positive experience overall than Instagram.

Worth noting too, while it’s not listed on the above chart, YouTube remains the most used app among US teen users, with 72% of teens using YouTube weekly, as per Forrester’s stats.

That, in general, seems to be indicative of the broader trends among young audiences, with YouTube and TikTok now leading the way, in their own respective usage paths (though YouTube is also trying to eat into TikTok’s market share with ‘Shorts’), while Instagram and Facebook slip further back, with negative press around Facebook, and it’s appeal to older users, seemingly lessening its overall ‘cool factor’.

Which is a major concern for Meta, especially as it eyes its big metaverse shift. A key element of all tech trends is youth adoption, and getting younger, more tech-savvy, more trend-setting users on board, and if Meta continues to lose ground to competitors, that could make it harder to maximize adoption of its VR and AR tools. Because while Meta’s coming AR glasses might be functionally powerful, if people don’t see them as cool, they won’t use them.

How do we know this? Because Google Glass failed for the exact same reason. And while that was some time ago now, and Meta’s coming wearables are far more advanced, and functional, the same habitual behaviors remain.

Meta needs to maintain a hold on the youth to maximize its opportunities in the next stage. It could still win out, especially if it can establish itself as the essential support layer for the broader metaverse, and a host, of sorts, for other developers and platforms to build in the virtual space. But there are some big risks here if Instagram, in particular, continues to lose ground.

The question then is can Meta actually win back younger users, or is it already too late, with TikTok, YouTube and Snapchat all superseding its popularity, in various ways, among teen users?

This will be a key element to watch in 2022, as Meta looks to really ramp up its youth offensive.