Pinterest is taking a different approach to content discovery, and the challenges of algorithms, by introducing a new 'Following' tab which will highlight new Pins from the people and boards you follow. 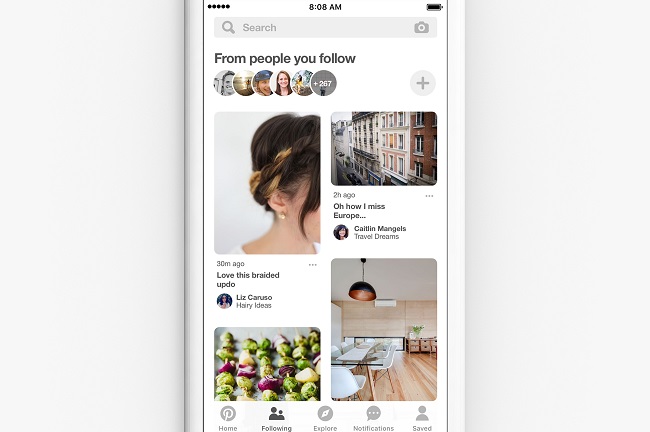 "One of the best ways to discover new ideas is to see what people and brands who share your taste are saving. By introducing the following tab, it’s now easy to see the latest Pins from all the people you follow, in the order they save them."

Note the specific mention of 'in the order they save them'. While other platforms have switched to entirely algorithm-defined feeds, Pinterest is giving users the option. If you want to use the main listing of recommended Pins, you can, but you can also switch to a chronological feed of content from the Pinners you like.

That could be something to consider for other platforms - if users don't like the algorithm-defined listings on Instagram or Twitter, why not give them the option? Instagram has already acknowledged that users want more recent content in their feeds - a chronological option would alleviate that. But then again, the data shows algorithm-defined feeds increase engagement, whether users appear to like them or not. With that being the case, it's hard to see the platforms forgoing that opportunity by giving people a way out.

For Pinterest, the update is in response to user demand:

"In talking with Pinners, we found that some people only wanted recommendations, while others liked to curate their feed - and most people wanted both options. Now you have the choice to get inspired through personalized recommendations in your home feed, or switch over to a tab dedicated to the latest Pins from people you follow."

That could help platform influencers build stronger connections with their audiences, while Pinterest also notes that they'll limit the capacity for people to post lots of Pins at once, flooding user feeds (though, of course, users could just stop following them either way).

Pinners will be able to see who they follow by tapping the + icon at the top of the following tab, where they'll also be able to quickly remove users from the list. Pinterest will also highlight related Pinners and subjects to follow in this section.

It's a small, but interesting update from Pinterest - which, as noted, is somewhat in variance to the current algorithm craze. It'll be interesting to see the audience response to the option, and whether it helps improve Pin engagement.

Pinterest's following tab will be available to all users within 'the next few weeks', and begins rolling out today on pinterest.com, and in v.6.46 of their iOS app, and v.6.56 of their Android app.