With the 2020 US Census getting underway this month, the Census Bureau has been working with social platforms to stop the spread of misleading information which could hinder its capacity to capture accurate information.

As a result of these efforts, last month, Facebook announced a ban on misleading information about when and how to participate in the census, as well as "any false reports pertaining to the consequences of participating in the national survey".

And now, Pinterest is following suit, announcing a new amendment to its Community Guidelines in relation to civic participation, which will see it work to detect and remove census misinformation from its platform.

"The 2020 Census will determine federal funding for schools, transportation, housing and other essential community assets people need to thrive–the building blocks for an inspired life. We want to do our part to make sure people on Pinterest are fully counted."

As part of this push, Pinterest says that it will:

Pinterest will also share any content removal information with the Census Bureau, in order to help it co-ordinate with other platforms to take further action on similar.

In addition, Pinterest will also add a new banner at the top of search results when people enter terms like “2020 Census,” “#becounted” and other popular queries, which will link through to the U.S. 2020 Census website for definitive information. 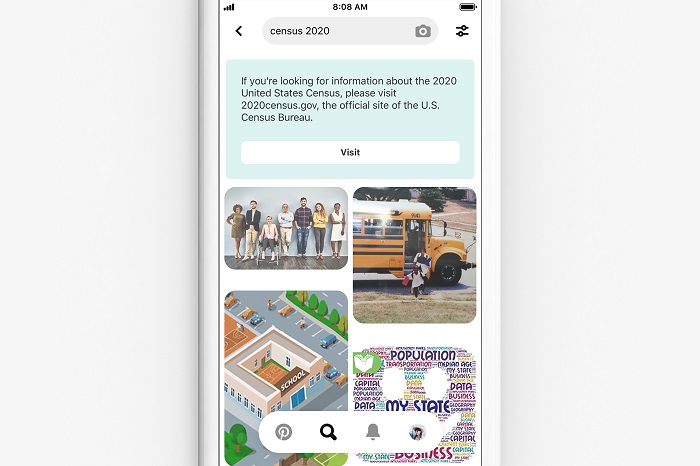 Given the concerns around misinformation on social networks, it makes sense for groups like the Census Bureau to take a more proactive approach to such, while it also underlines the level of concern around social networks being used as tools to influence political action.

Dedicated initiatives like this could help improve the focus on political influence campaigns - rather than leaving it to the platforms themselves to police these claims, if official groups work to raise relevant concerns pertaining to their specific area of interest, and suggest potential solutions, that could see improved action, and reduction of such threats.

The Census Bureau is also working with Twitter to detect and remove misinformation, which has also updated its reporting tools in order to help detect and action the same, while Google, and by extension YouTube, has implemented similar bans.