To mark World Mental Health Day, Pinterest has this week provided an update on its ongoing efforts to protect and assist users who are suffering from mental health concerns, including changes to its new self-help tools, and improvements to its detection and alert systems.

First off, Pinterest is rolling out an update for its recently launched self-help exercises, including "new illustrations and animations to make the experience even more inviting".

The option, launched back in July, provides simple processes in-app, which users can follow along with to help them relax and take a moment to consider their individual situation.

Initially, the exercises were only being shown to users who searched for terms related to potential mental health issues, but now, Pinterest is revising its discovery process.

"Before, the activities only appeared when someone searched for something that indicated they might be feeling down, like “stress relief” or “sad quotes.” But we didn't want people to have to search for something sad just to get to these resources. Now all you have to do is search for #pinterestwellbeing to jump into exercises for feeling gratitude and self-compassion, along with other interactive practices that could help you improve your mood."

The update will make Pinterest's self-help tools more accessible, which should help even more users over time.

Pinterest has also worked with the World Health Organization and the American Academy of Pediatrics to help them create new collections of resources designed to address key mental health concerns. The new collections can now be discovered on their respective profiles and via search. 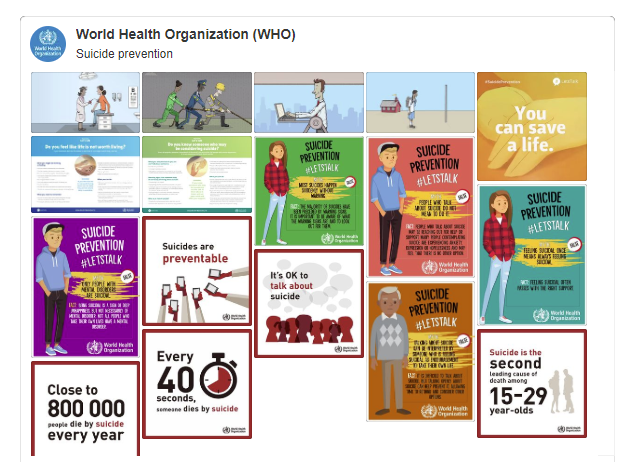 In addition to these functional developments, Pinterest has also been working to improve its detection and removal systems for content which "displays, rationalizes or encourages self-injury".

"We’ve been developing new machine learning technologies to identify and hide self-injury content, so now it's much harder to find on Pinterest. As a result, reports of this content from Pinners have decreased by 88% over the last year. If someone does report a Pin for self-harm, we’re now three times faster at removing it, which means fewer people see it."

This has become a key push for social networks. Back in February, Instagram announced its own new set of rules relating to content displaying self-harm, while Facebook recently provided an update on its efforts to detect and remove the same.

"If someone searches for one of these terms, we’ll show expert resources they can use to get free and confidential support."

While it's not as big as some other social platforms, Pinterest is at the forefront of mental health awareness and assistance, and as demonstrated by this data, it's been working hard to develop improved systems to provide relevant tools and links to users in need.

In some respects, you could argue that the more visual social platforms, like Pinterest and Instagram, have even more obligation to police such content due, the comparative nature of their feeds. Scroll through beautiful, curated streams of images, and it can be easy to get down about your own situation - which is another reason why it's good to see Pinterest taking a lead and pushing for more advanced tools to assist.

It's not an element that can ever be 'solved', as such, but the more social platforms can do to better protect users, the better off we'll all be.