Reddit is looking to improve content discovery, by adding a Facebook-like feed algorithm to its 'Best' sorting option, which will take into account more personal engagement signals to decide what to show in your list. 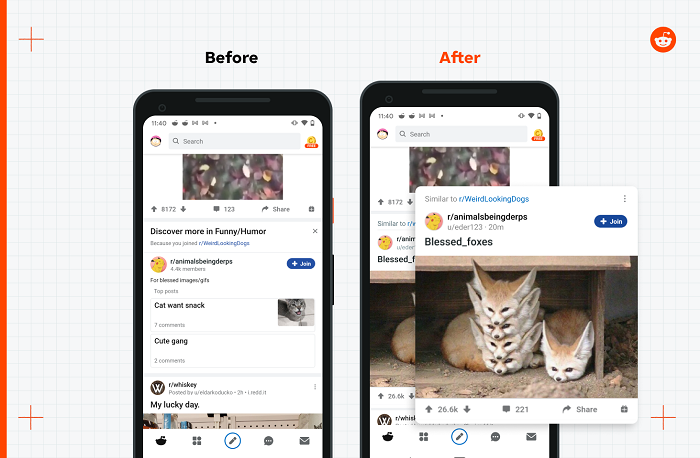 "There are lots of different sort options on Reddit - Hot, New Top, Controversial, Rising, and the very best of them all, the Best sort. The old Best sort used upvotes, downvotes, the age of posts, and how much time someone spent on a community to determine what posts to show first in your home feed. But even Best can be better, and now all redditors on mobile have an improved, more personalized Best sort in their home feed that uses machine learning algorithms to constantly evolve and improve what posts you see."

Reddit further explains that the new 'Best' display will use machine learning to predict what you may or may not like.

"This will result in a ranking of posts that we think you’ll enjoy the most based on your Reddit activity such as upvotes, downvotes, subscriptions, posts, comments, and more."

As you can see in the above example, each listing will now also include an explanation for more context, like 'Because you joined...' and 'Similar to...' at the top of the post. Users will also be able to signal that they like, or don't like, certain posts that appear in their feed, to help customize it to their preferences.

All of Reddit's other feed sorting options will not be impacted by the change.

As noted, the process could help to expand content discovery in the app, by highlighting similar topics of interest, which, ideally, will keep redditors spending more of their time scrolling. But really, that does depend on how good Reddit's recommendation algorithms are, and how aligned these recommended posts and subreddits fit with your interests.

But it could be a good option, and actually, a potential first step towards more algorithm sorting on the platform. Like them or not, algorithms do work in maximizing content engagement, and if Reddit finds that users end up spending more time scrolling through their 'Best' listing as a result of this update, you can bet it'll be looking at how to implement more personalized sorting in all aspects.

Which could end up being a boost for the app, as it eyes the next stage of business expansion.

The new sorting option is now available in the latest version of Reddit on iOS and Android.