With the global COVID-19 shutdowns set to significantly impact Q2 2020 reports, Q1 may be the best true indicator we have for some time as to where the major social platforms are placed, and how their growth plans are actually panning out in a normal operating environment.

On that front, Snapchat, and parent company Snap Inc., would appear to be on the right track, maybe not for transcendent growth, but for stable, steady increases that look set to solidify its position within the social media space.

First off, on active users - Snapchat posted an increase of 11 million DAU on its last report to 229 million - which represents a 20% jump in active users year-over-year. 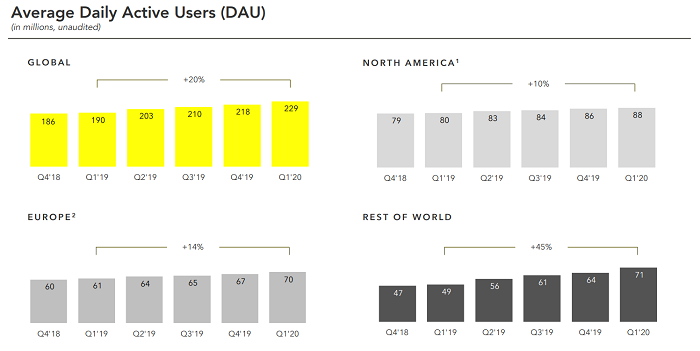 There would be some concern, however as to the make-up of Snapchat's user growth. As you can see here, Snapchat added 2 million more users in North America - its most lucrative market by far - while the majority of its growth came from the 'Rest of World' category.

Snapchat has seen significant growth in India since it revamped its Android app, which would be a key contributor to that 'Rest of World' chart. But as you can see in the ARPU charts (below), Snap would no doubt prefer to boost growth in the US, where is getting 3.5x more revenue per user. 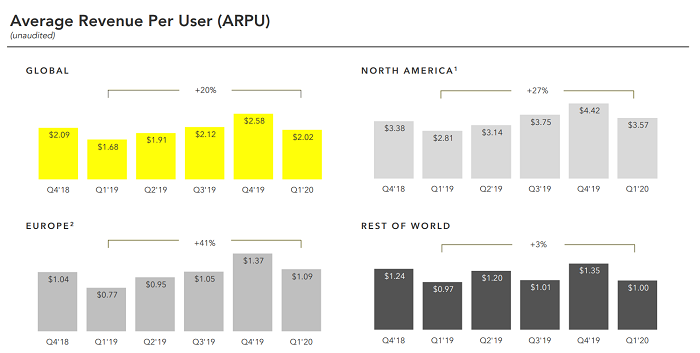 This is a key area of opportunity for Snap, and one that's it's yet to capitalize on. And while overall growth is solid, it does need to improve its ARPU balance in order to maximize its potential, which will likely require more significant regional pushes to showcase the app's promotional value for brands.

Still, revenue per user stats are relative to growth - and while Snapchat hasn't added more 'valuable' users in this respect, it has still posted a steady YoY increase in revenue for Q1. 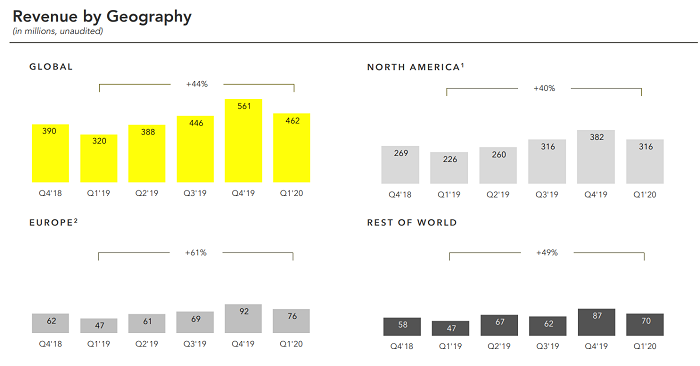 Snapchat's overall revenue increased by 44% YoY to $462 million in the quarter, which is a solid leap. That pleased the market, with Snap shares increasing 20% in late trading on the back of the release.

But even with that increased sentiment, the specter of COVID-19 looms large over the app's future forecasts.

In his prepared statements, Snap CEO Evan Spiegel noted that Snap had seen solid growth in advertiser interest in the first two months of 2020:

"While many advertising budgets declined due to COVID-19, we experienced high revenue growth rates in the first two months of the quarter which offset our lower growth in March. These high growth rates in the beginning of the quarter reflect our investments in our audience, ad products, and optimization, and give us confidence in our ability to grow revenue over the long term."

Snapchat says that its year-over-year ad growth in January and February was at 58%, before declining to 25% in March, as businesses shut down due to COVID-19. As noted, this is likely what we can expect to see from all Q1 updates, but the focus, Snap notes, should be on those first months as an indicator of its usual rate of performance, outside of the current extraordinary circumstances.

Spiegel also noted that Snap is seeing some positive signs amid the pandemic:

"In the short-term, we're shifting sales resources and pulling forward some investments in direct response to better serve the advertisers who are trying to reach our audience during this time. For example, we can help movie studios pivot to digital releases by supporting them with a suite of products designed to track titles over a dynamic and flexible release window. We’ve also seen many large brands doing a lot of important things to help their community and the broader world, and we're helping these brands communicate their efforts to our audience in a thoughtful and approachable way that inspires others to make a positive impact."

Snapchat recently worked with Universal on its promotion of animated film 'Trolls World Tour', which was released digitally in replacement of traditional cinema distribution. The promotion included the incorporation of Trolls AR masks into the Snap Camera add-on, which has also gained significant momentum as people switch to working from home. 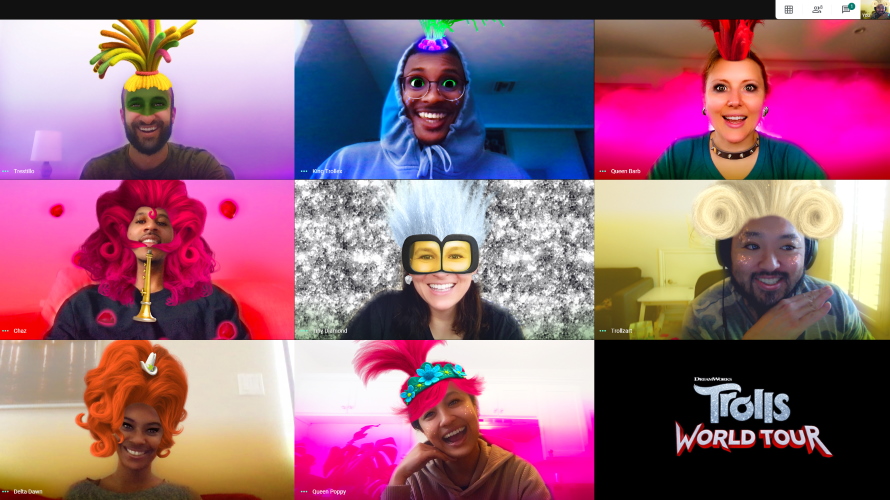 Early data suggests that Trolls World Tour could recoup its costs, but will be far less financially successful than it would have been in cinemas, tempering predictions for the next evolution of cinema. But even with that consideration, Snapchat's promotion could help it showcase how the platform can play a role in such moving forward, and help film producers build hype with Snap's younger audience.

In terms of specific usage and behavioral shifts, Snap says that, on average, more than 4 billion Snaps were created each day in Q1 2020. Snap usage has also increased significantly during the COVID-19 shutdowns, so if anything, that number looks set to rise even further, but the reduction in advertisers will somewhat offset the benefits of that engagement, at least in the immediate term.

But that's not where we're looking - COVID-19 will essentially nullify any results within this period, from an analysts standpoint, or at least temper them significantly, which means that the main aim for Snap will be building on that engagement, in order to strengthen its position moving forward.

And there are some clear positive indicators here:

It's clear that the market sees a lot of potential in Snap, and its capacity to reach young audiences in varying capacity.

Things looks set to be a lot more murky over the remainder of 2020, but the signs are good, and Snap does appear to be establishing a more stable, attractive platform, both for users and for advertisers and business partners.

If it's able to expand its market appeal in other regions, it'll be well-positioned beyond COVID-19.