Back in 2018, reports suggested that Snapchat could end up running out of money, as its growth rates slowed, and its infrastructure costs continued to rise. That's because under Snap's deals with Google and Amazon Web Services, Snap needs to pre-contract its cloud-computing costs based on growth estimates. And because fewer new users were signing up, Snap would eventually end up paying for storage it didn't need.

Luckily, Snap was able to re-negotiate its cloud-computing costs last year - but even so, with slowing growth rates, costs continue to mount. Add to that a $100 million legal settlement with shareholders, and Snap's outgoings have again become a concern, which is reflected in the company's latest performance update.

But it's not all bad news for Snap - first off, on users - Snap added 8 million more daily actives in Q4, taking it to 218 million DAU to end the year. 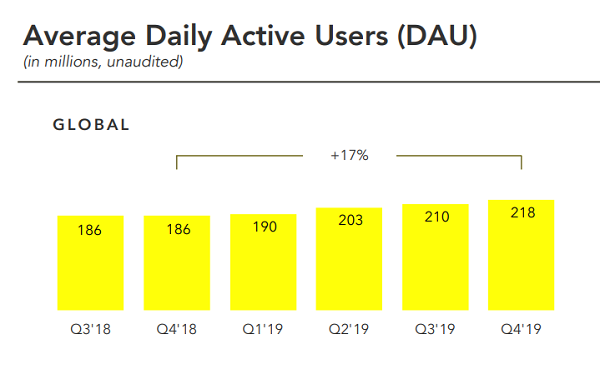 That equates to a 17% increase in users, year-over-year, which is a good result - though Snap's user base still remains a fair way behind its main rival in Instagram. For comparison, Instagram Stories alone sees 500 million daily active users.

Regionally, Snap added 2 million more DAU in both North America and Europe, and 3 million more in its 'Rest of the World' category. 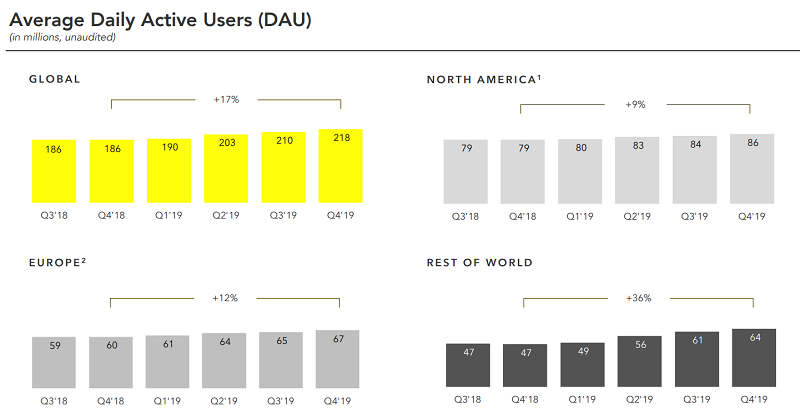 The good news is that its growth rate is better in the first two regions - which are also Snap's highest drivers of revenue - but Snap actually added seven million more users in the 'Rest of the World' category in Q3, which was driven, in large part, by the app's rising popularity in the Indian market.

That growth in Q3 was seen as a sign that Snap's Android redesign, rolled out in April last year, was catching on, and helping it grow in the Indian region. Android is the most popular operating system in India, and with Snap gaining momentum in the nation, the expectation was that it would see ongoing growth, and catch on with a new audience. That growth has halved in Q4 - which is not a great sign, but then again, Snap's expansion into emerging markets hasn't yielded any significant returns in ad spend for the company as yet either, so the bottom line impact is, seemingly, not significant. Yet.

You can see the same reflected in Snap's Average Revenue Per User charts - North America remains the most significant region, by a long way, in terms of revenue growth. 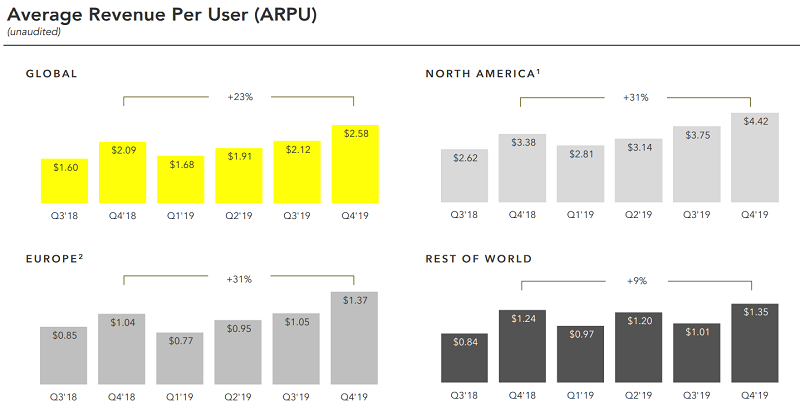 This, really, is the key slide for Snap, and the noted increase in Q4 is important. Realistically, Snap won't be able to compete with Facebook and Instagram on scale, so it needs to show that its audience is engaged, active - and will spend money with that brands that choose to reach out to them through the app.

Snap has repeatedly touted its engagement stats, its hold on younger audiences. In order to make that a significant consideration for the market, it needs its ARPU stats to underpin that performance. Overall, Snap's average revenue per user increased 23% YoY to $2.58, a good result, yet more work needs to be done to capitalize on expanded regions.

But then there's the other concern - overall, Snapchat's revenue increased 44% YoY to $561 million, which is a good result which just missed analyst expectations.

And then there's this chart: 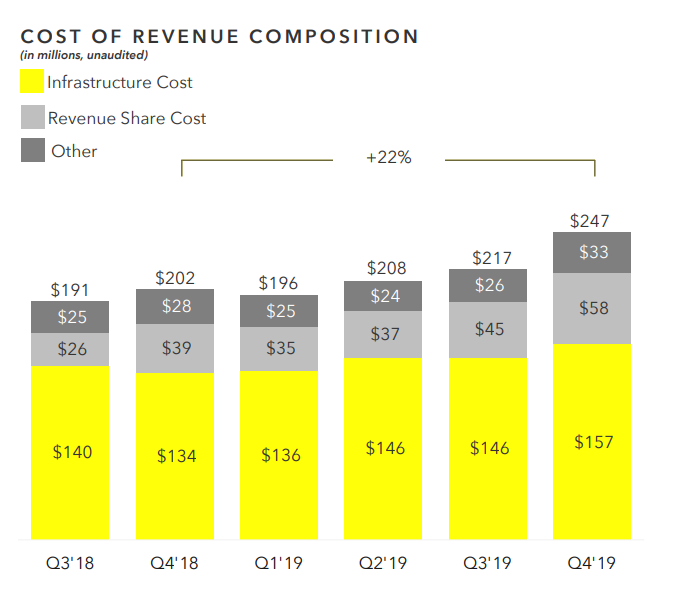 Snap's costs continue to mount. Previously, Snap has stood behind its decision to rely on its infrastructure partners, as opposed to building its own servers. Will that be a good move in the long run? It's hard to say, and it's also difficult to predict whether increasing its focus on newer ventures, like AR-enabled glasses and the like, will end up paying off in a significant enough way to offset such rises.

Basically, Snap's results are okay, but not great. It's adding users, but it needs to add more, and faster; it's improving its revenue position, but it needs to be making more outside of North America.

How can Snap achieve these things? One thing's for sure, slow and steady will not end up winning the race in this respect. Expect to see Snap ramping up its monetization efforts over the course of 2020.