Snapchat Will Showcase User-Created Lenses as Part of New Program

Augmented reality is believed to be the next big thing in social media, and the winner of that race will be the platform with the most innovative, popular tools and options – the overlays and interactive tools that get people talking and engaging within their apps.

Thus far, Snapchat has lead the way on this front, with their interactive Lenses proving hugely popular (more than a third of Snapchat's daily active audience uses Lenses every day). But Facebook is moving to catch up – a good comparison came last year when both Facebook and Snapchat released Game of Thrones graphics, with Facebook’s maybe coming about a little in front.

Facebook clearly has the scale and capacity to create more innovative tools, but then again, Snapchat has been able to better tap into the zeitgeist of the time and provide more resonant, ‘must-try’ options.

Facebook’s plan to counter this is to open their AR tools up to everyone, so more creators can build their own AR experiences, but Snapchat has also done the same with their ‘Lens Studio’. And now, Snap has one-upped Facebook on this front, announcing that selected creator-made Lenses will be featured in the app’s Lens carousel, along with their other Lens options, providing more exposure for creator content, and giving Snap another avenue to stay up with the latest trends.

As reported by Mashable, the new program will be called ‘Creator Boost’ and will provide exposure for Lens creators by sharing their user name whenever their Lens is selected for use. 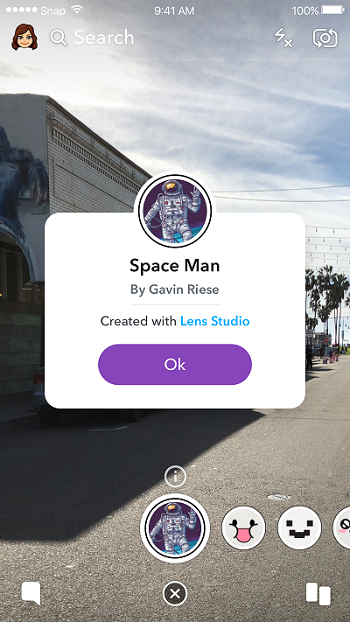 The chosen creators won’t be paid for the usage of their Lens, but they will gain exposure to the app’s 187 million users - which, for most, will likely be adequate compensation for their efforts. The selected Lenses also can’t be branded, and Snap will limit the addition of Creator Boost additions to only ‘a few artists’, at least in the initial stage.

The new initiative is another example of Snap’s growing push to better ingratiate itself with its influencer and creative community. Part of the impetus behind their latest re-design is to put more focus on the app’s best content, which includes highlighting work from some of its top creators within the re-vamped Discover section.

Up until recently, Snap had refused to provide specific benefits for influencers, preferring to focus on their ‘Snapchat is for friends’ ethos and keep the more intimate feel of the community as the focus. But Snap, now publicly listed, knows that it needs to keep building its audience, and boosting engagement where it can - and a key way to do that is to keep influencers (and their audiences) on board, while also finding ways to showcase the best the app has to offer in order to boost time spent.

Twitter has faced the same challenge – while focusing on community is an idealistic goal, the reality is that in order to expand, social apps need to provide more content, and showcasing the best of what’s already posted on their network is the best way to do this.

Giving creators the opportunity to have their work highlighted within the regular Lens listing will likely prove to be a winner in this regard. No doubt it won’t take long for Facebook to do similar, but still, it’s another opportunity for Snap to continue to build stronger connections with its community - which, as the latest stats show, is looking stronger than ever, despite Facebook’s many challenges.