After last week announcing a new slate of exclusive Snap shows from celebrities - including programs from Serena Williams, Arnold Schwarzenegger and comedian Kevin Hart - Snapchat is also testing out a new way to boost exposure for its exclusive content, with a new section, separate from Discover, focused solely on Snap's owned content. 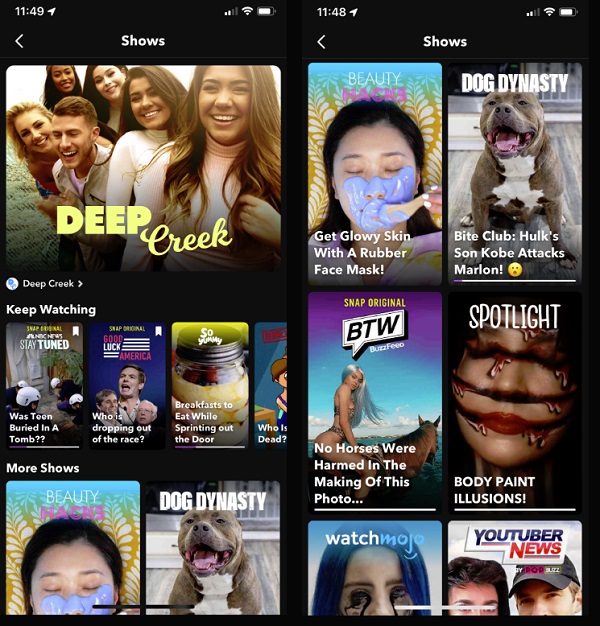 As first reported by Mashable:

"Right now, Snapchat's shows are integrated in the app's Discover section. With this test, which was recently spotted by Mashable in the app, an additional swipe over from the Discover page brings up a hidden "Shows" section."

The new 'Shows' section would make it easier to binge on Snap's original content, while also staying on top of new episodes and programs as they launch.

And the option is definitely worthy of note - while Snapchat's overall user count may not be increasing at comparative rates to Facebook's platforms, Snapchat remains hugely popular with younger users, and the addition of a dedicated Shows tab, along with these new programs, could prove a big lure for advertisers looking to reach those younger markets.

Indeed, back in May, Snap reported that some of its top performing shows are seeing tens of millions of views, with one of the platform's most popular shows, 'Endless Summer', reaching 28 million unique viewers in its first season.

The aim of these programs, according to Variety, is to help creators envision to next generation of shows, directed towards an increasingly mobile audience.

"The company received hundreds of submissions and selected a group of creators to experiment with the mobile format and storytelling to produce a new type of comedy show. The comedy shows include sitcoms, mockumentaries and animation, with each episode 3-5 minutes in length and a season averaging 8-10 episodes."

The various elements underline rising opportunities within Snapchat, which is arguably more in-tune with the next generation of consumers than any other platform at present. Traditional TV is already dead for the next generation - younger consumers are far more likely to be aware of DanTDM than they are of any more commonly recognized TV personality, who you might assume they'd be aligned with. And as those younger users shift into more lucrative demographic brackets, brands will increasingly be looking for ways to best reach them, through the platforms they're engaging with.

Right now, I would say that Snapchat is where you want to be looking on this front. IGTV hasn't taken off, Facebook Watch is still treading water. YouTube remains a key platform - but Snapchat, through its shows, is also on the rise.

Worth paying attention to the company's moves on this front.