Streaming Now Accounts for 19% of TV View Time, According to New Report

Facebook, YouTube and Twitter are all trying to get into the video streaming market in varying forms - and for good reason. According to a new update from Nielsen, streaming video content now accounts for 19% of the average American's view time, up from 10% in the first quarter of 2018. 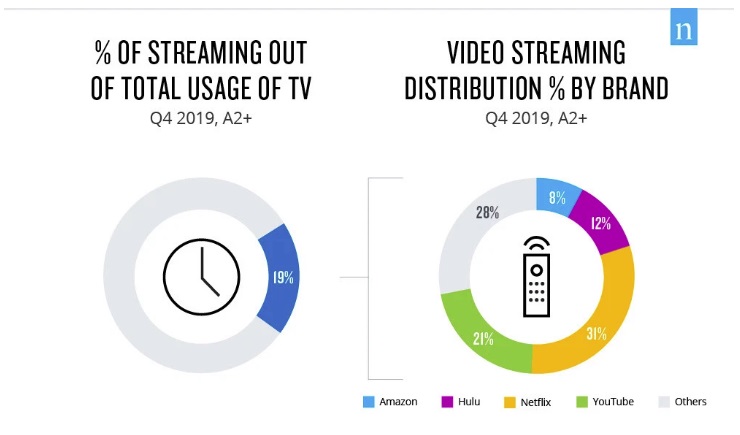 As you can see here, Netflix leads the pack, followed by YouTube, with the remainder falling a way behind. Facebook - which has reported seeing improvements in engagement with Facebook Watch content - doesn't make the top four, but there is still opportunity for the platform to gain more traction, while it's also looking to make a separate push for younger viewers via Instagram's IGTV.

Nielsen's report also signals rising opportunity, with 60% of Americans now subscribed to more than one paid video streaming service, and 93% of them noting that they plan to either increase or keep their existing streaming services in future.

'Cost', 'ease of use' and 'variety of content' are key factors in the rise of streaming content - and while it still only equates to a fifth of total TV viewing, the fact that it's almost doubled in usage over the course of a couple of years is a significant development.

As noted, most of the major social platforms are seeking out their own pathways into the streaming arena, with the advertising potential, combined with their advanced audience targeting tools, offering major benefits for each, if they can get it right.

Just this week, The Information reported that YouTube is looking to expand its YouTube TV offering to also include "a wide range of subscription-streaming services run by entertainment companies". Facebook has also explored its own premium subscription offering, but hasn't made any significant moves on this front as yet.

Twitter, meanwhile, has gone back and forth on its own streaming ambitions, but it will make a bigger push later this year as part of its 2020 Olympics coverage.

Given the increasing ease of access to streaming services, both Facebook and YouTube are in prime position to take the next step. YouTube has previously reported that connected TVs are its fastest-growing viewer segment, expanding its capacity on this front, while Facebook launched a new, TV-connected version of its Portal smart home device in September last year.

That, again, could lead to major opportunities for advertisers.

There's still a way to go, and Facebook, in particular, has a lot to do to better establish its TV-like offerings. But given the growth in streaming, it makes sense to see increased emphasis from the major online video providers.