The 2016 State of Social Business: Shift from Innovator to Integrator [Podcast]

Ed Terpening, Industry Analyst at Altimeter Group, is back for his second appearance on the Social Business Engine podcast. In this episode, Ed will review findings from their newest report: 2016 State of Social Business: Social's Shift from Innovator to Integrator.

Altimeter Group, a Prophet Company, was started six years ago by Charlene Li, who you may remember from episode 94. Altimeter researches key technology disruptions and reports on their findings - they look at digital transformation, the Internet of Things, social business, and big data. Their global footprint allows them to collect research from around the world and provide advisory services to brands.

The State of Social Business report is published annually and is based on what's going on in the industry that year. There are four key findings in 2016 we're going to discuss, the first being how the focus is shifting to an integrated customer experience.

In the past, social was siloed. Altimeter's new research shows that social media is being integrated into other parts of the company as it's fast becoming part of the customer's overall digital experience. Ed also points out that social selling in the B2B sector is a high area of investment. 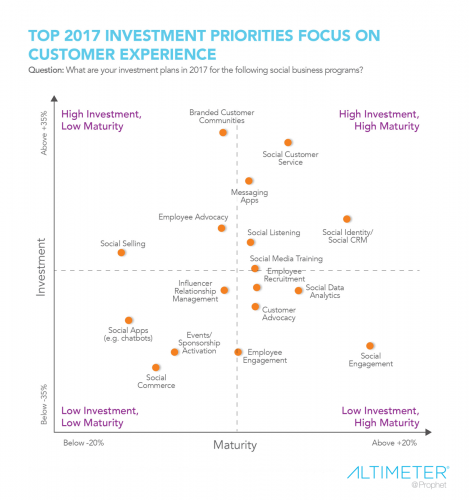 The second key finding from The Altimeter Group 2016's State of Social Business is the social team's shift from innovator to integrator.

The report shows that 79% of strategists are becoming more operational. Specialized teams, like customer service, are tested on social media then passed to a more functional area, i.e. the customer service team then takes over that portion of social. This enables the social team to have more time to explore other facets of social media.

Altimeter Group's research also shows that social commerce hasn't yet achieved impressive results. The buy button hasn't been received well in the context of social media activity, other than on Pinterest. Ed says this is because the other networks were created for different reasons. Twitter introduced a buy button and took it down. Likewise Facebook has tried social commerce too. Conversational commerce and artificial intelligence are attracting a lot of investment. Facebook has recently forayed into this realm by introducing their Chatbots, IBM has Watson, Amazon has Echo, Apple has Siri, Google has... well, Google, and the list goes on. 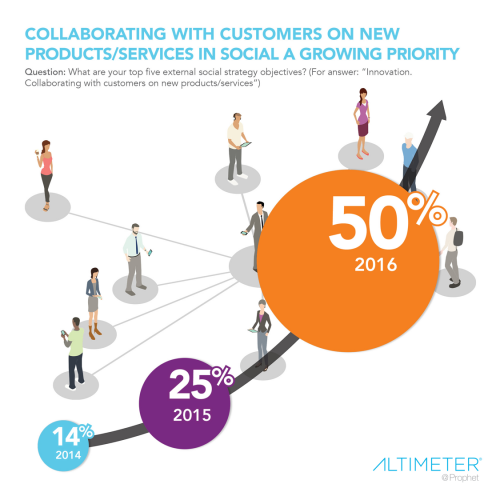 Ed says there's a change in the handling of social media advertising. These groups have little experience collaborating, causing the governance of who owns which ad platform to be varied. At large companies where this change is happening, there's an opportunity for social strategists to focus more by allowing the advertising experts handle more social media advertising. Many social teams today can't afford to experiment as much as they have in the past and are looking for partners.

On this podcast episode, Ed and I only touched on a few findings from their new report, The 2016 State of Social Business: Social's Shift from Innovator to Integrator. Tune in to learn more and then be sure to download your copy of the free report on their website.