Yes, I know that TikTok is under a cloud right now, and that maybe it's not the best time to be providing updates on potential tools that marketers can use to maximize their TikTok presence. But the fact remains that it's still a hugely influential platform, and that many brands are indeed looking at how they might be able to use it within their marketing strategies - data-sharing concerns or not.

And if TikTok is eventually sold to a US company, as expected, it will likely remain an important consideration.

Which is why, despite the ongoing negotiations, this latest update is of relevance.

New Feature Alert! ???? You can now put text on the cover of your videos to give followers a preview of what your video is about. Find it on the cover editing page when you're done filming! pic.twitter.com/K1JRr36Kte

As you can see in this video, now, when you tap on the 'Select Cover' option as you upload your TikTok clip, which is the frame that users will see on your profile and in discovery feeds, you'll also be able to add custom text, in various styles, specifically for your cover image. 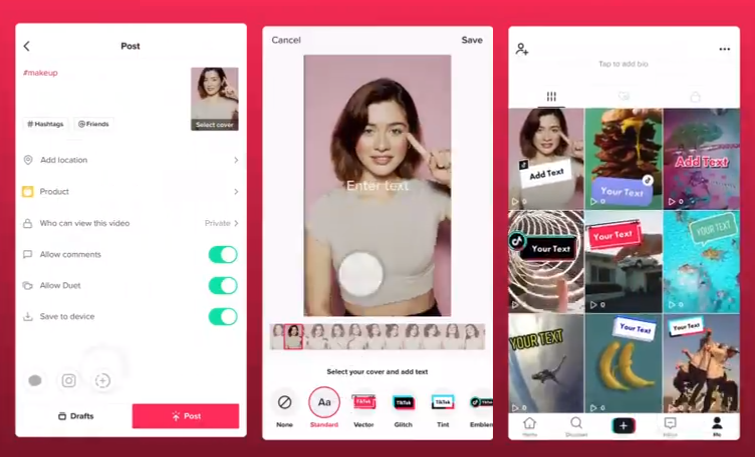 That could be another way to draw viewers to your posts, with simple explainers as to what your video is about.

Thumbnails can play a key role in attracting video viewers - as explained by YouTube:

That's also important on TikTok, because as TikTok recently noted in an explainer about how it's distribution algorithm works:

"A strong indicator of interest, such as whether a user finishes watching a longer video from beginning to end, would receive greater weight than a weak indicator, such as whether the video's viewer and creator are both in the same country."

As such, giving users more insight into what to expect from your clip could see more people watching it through to completion, thereby improving content reach.

And it looks more professional too. The new option is available now in the latest version of TikTok.