Despite user safety concerns, and ongoing global tensions which could lead to growth impacts for the Chinese-owned app, TikTok remains hugely popular, once again leading the global download charts on both iOS and Android in May, according to the latest data from Sensor Tower. 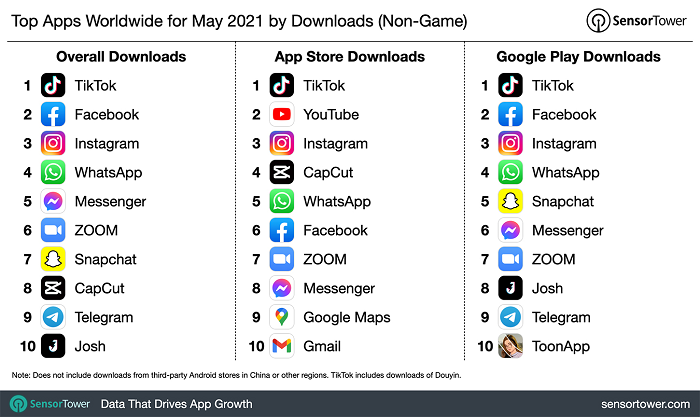 The app has held the top spot on the download charts for months, and continues to grow, despite varying regulatory concerns and the rise of alternative tools and options.

"TikTok was the most downloaded non-gaming app worldwide for May 2021 with more than 80 million installs. The countries with the largest number of TikTok installs were from Brazil at 16%, followed by Douyin in China at 12%."

So it's not TikTok in isolation included in these stats, with the Chinese version 'Douyin' also factored in. But still, the app's sustained growth is impressive, and underlines the rising relevance of the platform for younger users in particular.

Even if you don't like it, or you just don't get why it's so popular, you need to be paying attention, and considering its potential value in your marketing plan.

Yet even so, TikTok still faces various potential growth challenges, with the European Commission recently giving TikTok a month to answer claims that it's a danger to minors, and Italian authorities forcing the company to remove more than 500,000 accounts due to concerns about minors using the app.

And this is before you consider the ongoing concerns around data surveillance, and TikTok's possible linkage to the Chinese Government, with the app recently adding new biometric data collection into its Terms of Service, which could be set to spark new alarm bells among some regulatory groups. The US has also implemented new restrictions on Chinese-owned companies over the possible use of surveillance technology outside of China, and it remains possible that TikTok could eventually be caught up in this push.

In other words, despite TikTok's popularity, it could still face bans or restrictions in some regions, with various investigations still examining the potential security risks of the app.

But right now, it remains an important platform, and one that all brands should at the least make themselves aware of, and monitor as it continues to add more business tools.

In looking at the other apps listed, Facebook still dominates the overall chart, with 4 of the top 10 apps in all categories, and there's been little movement, overall, since Sensor Tower's last update. As such, it's TikTok that remains the story to watch, and with the app projected to reach a billion users sometime this year, it's definitely worth paying more attention to the app.

You can check out Sensor Tower's latest download charts here.