On the surface of it, TikTok does indeed appear to be on a path to becoming the next big social platform to consider, where, at some stage, brands will be scrambling to build a presence in order to connect with the app's expanding user base.

But there are some cracks beginning to form in the facade of TikTok's rise in western nations, with queries around how many users the app actually has, concerns over content censorship, and now, questionable advertising methods, which could have a significant impact on a key area - the app's relationship with influencers.

As reported by AdAge, TikTok has been using popular videos submitted to its platform as part of its ongoing, external promotional campaign. The problem is, the creators of these videos have not been told their content is being used in these ads - and they most definitely have not been compensated for such.

"[Elijah] Jay's video, in which he performs a balloon-swallowing stunt, has been seen by hundreds of thousands of viewers on TikTok, the Chinese social video platform. He just never signed up to do it as part of TikTok’s advertising. In August, Jay says he started receiving messages from friends who had seen the TikTok ad, starring him. His first reaction was, “oh cool,” he says. But then it sunk in: He never knowingly agreed to let his likeness be used."

The video, as seen here, utilizes TikTok's never-ending loop functionality, repeating the trick over and over.

The video has garnered more than 200k Likes on the platform, but the expansion of it into TikTok's advertising was not something Jay had agreed to. At least, not explicitly.

As AdAge notes, TikTok's usage guidelines do allow it to take user-submitted content and, essentially, use it however they want, using the same stipulations which are in place on most social platforms.

That license is even more specific in the terms of the TikTok 'Creator Program' (which, incidentally, lists TikTok's home office as "WeWork Aviation House, 125 Kingsway, London WC2B 6NH". 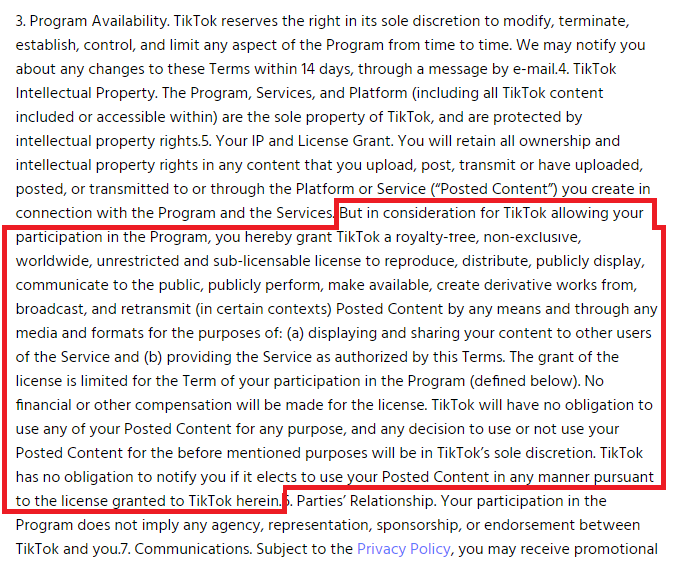 But while it's not breaking any laws, it could be damaging its relationship with creators, which TikTok will eventually find that it cannot do if it wants to maintain and grow its platform.

That's the same issue Vine faced before it's untimely demise - while Vine, much like TikTok, had a huge cultural impact, and became a key training and discovery space for many video creators who have since gone on to become major stars (including Jake Paul, Hannah Stocking and Thomas Sanders), all of those creators ended up becoming big on other channels, because Vine didn't offer them the capacity to effectively grow and monetize their work.

TikTok will find the same - at some stage, its most popular creators will seek to maximize their revenue opportunities, and they'll likely have to switch to, say, YouTube or Facebook, in order to do so. Because of this, TikTok desperately needs to maintain connection with its top stars. Taking their work and using it in promotional campaigns, without compensation, is not the way to do that.

TikTok is working to establish programs to better ingratiate itself with its platform influencers, but right now, those options, like its Creator Program, don't offer anywhere near the same revenue potential as other options.

Vine's stars eventually revolted against the app after offering parent company Twitter a deal which would see them get paid directly by Twitter for their content. Twitter declined, and Vine was shut down shortly after, essentially making it the nail in the coffin for the app.

And while TikTok still has time to course-correct, the message of Vine's demise is clear - don't underestimate the importance of your creators. Clearly, TikTok hasn't got that memo yet.

As noted, this is just the latest in a number of questions rising around the Chinese-owned, short video app. For one, while TikTok is clearly seeing more usage, what those actual usage numbers are is not clear, because TikTok won't report its official usage stats.

Overall, TikTok has more than 500 million users, a stat which parent company Bytedance reported in July last year, but that figure also includes users of Douyin, the first iteration of the app which was only made available in China. Douyin hit 400 million users in China alone last November, so that would suggest that TikTok has around 100 million or so outside of China. Maybe.

“It’s not a billion, but it’s not half that either.”

But that's not very clear, and questions have been raised over the app's capacity to actually retain users, even if it is able to lure them in initially.

TikTok has spent up big on its advertising assault, including the aforementioned ads which showcase popular content.

As reported by AdAge:

"In September, TikTok was the No. 1 advertiser on Snapchat and the No. 2 advertiser on YouTube, according to SensorTower, an app marketing analytics firm."

That, reportedly, has lead to a lot of people downloading the app, but few of them are sticking around. TikTok could counter this by reporting the full user stats, but they haven't, which may suggest that there's some truth to the suggestion.

Then there are the questions about content censorship, with the app suppressing certain topics in certain regions, as per its moderation guidelines. And given the company is based in China, where the nation's authoritarian government maintains strong control over businesses operating within it, how that will affect TikTok moving forward is difficult to predict.

Overall, there are some question marks around TikTok and its potential future, some gray areas in its rise that need to be clarified before we have a better idea of what it actually is. Starting off on the wrong foot with creators only adds to these concerns, which could eventually see the app stumble and fail to become the next big social contender.