It’s been experimenting with the option for the past few months, and now, Twitter is moving to the next stage of testing for tweet reactions, adding more ways to quickly respond to tweets in-stream.

As indicated by this tweet, Twitter has launched a live test of tweet reactions in Turkey, with the prompt above calling for Turkish users to ‘long press Like to let us know what you really think’.

As with reactions on other platforms – including Facebook and LinkedIn – the option will make it easier for people to give more nuanced, quick feedback as they view a tweet, with the ‘heart’ emoji often not enough to capture your response or represent your meaning.

Twitter’s four additional emoji responses will enhance context in this respect, which will provide more response data for Twitter, as well as for those looking to understand their audience, which could help to optimize platform strategies, while also aligning with habitual response behaviors learned in other apps. 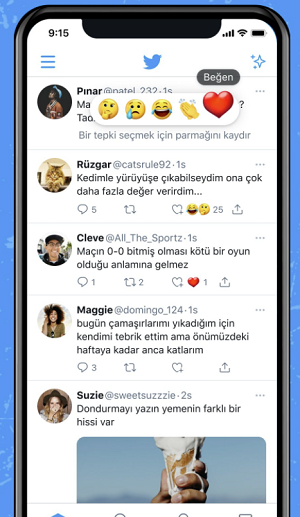 As you can see here, reactions will also be listed on each tweet, so you can see how others have responded, which Twitter could use as a ranking signal, or it may simply serve as an additional indicator of common response, helping to improve the tweet process. If, of course, that’s how you see it. Some people will view the option as cluttering the tweet display, and Twitter users are generally not open to change, so I wouldn’t expect there to be universal acceptance straight off the bat.

But as noted, the key consideration here is additional context and ease of response – and with people now so used to responding via emoji reactions in other apps, it makes sense for Twitter to at least experiment with the same, and see whether it improves the user experience. Twitter itself also added reactions for DMs last year.

As noted, Twitter’s been testing its new tweet reactions over the last few months, stemming from an initial survey sent out to some Twitter users in March, which asked for feedback on a range of possible reactions sets.

From there Twitter moved to live testing, with reverse engineering expert Jane Manchun Wong posting this example of the process in development back in May.

The icons for the Cheer and Sad reactions are WIP and shown as the generic heart one at the moment https://t.co/ZCBhH8z7JR pic.twitter.com/dGqq1CzIis

So this has been coming for some time - and while early response has been varied, based on these initial tests, it does, again, align with broader habitual behaviors, and add something more into the tweet experience, especially from an analytics perspective.

Of course, the counter to this is that these are largely vanity metrics, which will give users yet another meaningless scoreboard to compete on, lessening the overall platform experience by trivializing contributions. In general, Likes and follower counts contribute to the same, as acknowledged by Twitter CEO Jack Dorsey himself, but Reactions at least provide some additional nuance, and a broader indicator of how others are responding to a comment or post.

Really, if you're going to have Likes, you may as well have Reactions - and while there is also a risk that response emojis can be used in negative ways as well, by limiting which options are included, Twitter can negate this (note there are no clearly negative reactions within the current test set).

On balance, it seems like a logical step, and it’ll be interesting to see what sort of insight the new reactions can provide, and what they show about how your audiences is responding to your tweets. Does getting lots of claps correlate with more click-throughs? Does the laughing emoji prompt more engagement? These are new questions we’ll soon be able to test as the new reactions are launched in more regions – if, of course, the initial test goes to plan.